The Whiteness of Westeros

Caroline Siede suggests that Westeros has a race problem, and that the Lannisters should be black:

Here’s a question for Game Of Thrones fans: Why aren’t the Lannisters black?

The answer probably seems painfully obvious, at least if you’re a defender of the show: The world of Westeros is modeled after medieval England, so it would be inaccurate to have an ethnically diverse set of ruling families. This is also generally how the show’s cast and crew have responded to questions about the show’s diversity. For example, when asked why his series has a handful of black characters but no Asian ones, author George R.R. Martin wrote on his blog: “Well, Westeros is the fantasy analogue of the British Isles in its world, so it is a long, long way from the Asia analogue. There weren’t a lot of Asians in Yorkish England either.”

Meanwhile, actress Nathalie Emmanuel—who plays one of the few characters of color on the series—told The Telegraph: “We’re dealing with a fantasy world in an almost Medieval setting, set around a fantasy version of the British isles, where history tells us that a queen would have been white, generally.” Martin later wrote that “Westeros around 300 AC is nowhere near as diverse as 21st century America, of course,” seeming to forget that he created Westeros wholesale. 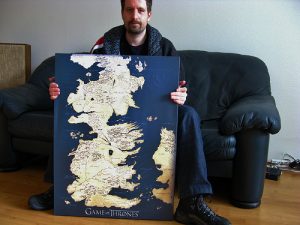 I should start by saying that Siede’s argument rests somewhat heavily on Westeros being roughly 130 times the size of Great Britain, which is something I believe has to be flat-out rejected for the story to work on any level. Siede also relies on “Once you have dragons, you have to be open to anything,” which is a mentality I also reject. I believe that stories beyond the supernatural have to be evaluated on their own terms, realistic and unrealistic, in the context of the world their story takes place in. With that out of the way…

Some will argue that it’s ridiculous that the Lannisters should be black. Others may argue that the first group is being racist or demonstrating their privilege or something. The truth, as I see it, is actually a bit more complicated than that. First, making the Lannisters black would seriously complicate the rest of the story, or at least require serious revision. But second, given the fictitious land of Westeros could actually be a lot more diverse than it is, and without really being a diversion from the story that Martin wanted to tell.

It is rather important to the story that the people of Westeros are not an especially enlightened lot. Even by medieval standards, where there were bits of democracy here and there (even if they existed under the thumb of a monarchy). The only real semblance of enlightenment is a degree of religious pluralism, with devotees of The Old Gods and New living side-by-side and tolerating one another especially well. But apart from that, Westeros being enlightened on matters of race would be oddly out of character. And the Lannisters in particular being of a different race would mess with their position in Westerosi society. Even if they owe their position due to mineral wealth of the Westerlands, the combination of sitting on valuable land and being different would likely have resulted in them losing the land. Either through a xenophobic alliance with the other kingdoms to take and divide the spoils, or simply being being dumped by the Targaryens once they got itchy with their dragons.

If we assume diversity on Westeros, it would most likely have occurred either through the non-whites being displaced natives (which, again, suggests Not Lannisters) or through separate arrivals to the land who somehow managed to hold on to their land rather than being pushed out. If the latter, then you would actually be more likely looking at people who are sitting on land that is, for whatever reason, not really worth going to war over. Not the Westerlands, but perhaps the Iron Islands or the Vale. It’s unknown how valuable The Vale is, but it is known that it’s a fortification dream. The Iron Islands seem easier to attack, but hold very little value. Unfortunately for the story, neither plays the sort of role that would likely satisfy those concerns of Westeros’ whiteness, because both live mostly on the periphery of the story, and the most prominent characters from each place are not ones you want to be the primary representative of a particular demographic.

The minority-ish (darkish-skinned, anyway) demographic that does exist is Dorne, which is established early on as a particularly difficult or unfruitful region to try to conquer. They were the only one of the kingdoms that actually wasn’t conquered. However, due to their being out of the way, kind of like the Iron Islands and Vale for that matter, they simply don’t play an especially large role.

That would make the best candidate… The North. So instead of asking why The Lannisters aren’t black, we should perhaps be asking about the Starks. The protagonists! The North has an unpleasant climate, a reasonably good defense position for invasion from its south, and has a security threat to its north but for a very large wall. I could very easily imagine the north being settled by a different race and more or less left alone. That might complicate the intermarriage plotlines (specifically Eddard and Catelyn), but The North is important enough that as a virtue of necessity I could see the rest of Westeros making its peace and finding a mutually beneficial arrangement that overlooks racial differences. It has the added benefit over The Vale and the Iron Islands in that those two can mostly be ignored, while mutual cooperation with The North would be to everyone’s benefit in the same way it’s to their benefit to be peaceful with their wealthy neighbors to the east.

The alternative to all of this, and perhaps preferable in Siede’s eyes, would be that instead of this kingdom or that one being from Someplace Else and of a different race, Westeros is a truly multiracial place where each corner of the continent was originally settled by some band of sailors from somewhere else. If the racial groups kind of balance each other out, then it would be more difficult to dislodge (for example) a black Lannister family. It could even be enough for everybody to make relative peace with one another on the racial front, again out of necessity.

So in that sense, Siede is right that they could have done more than they did, either Martin when he was originally writing it or the producers when they cast the show. At the very least, it would have made some of the minority characters that did exist to varying degrees of offensiveness less conspicuous. It might not be so bad to have non-white barbarians if they weren’t among the so-few minorities that appear.