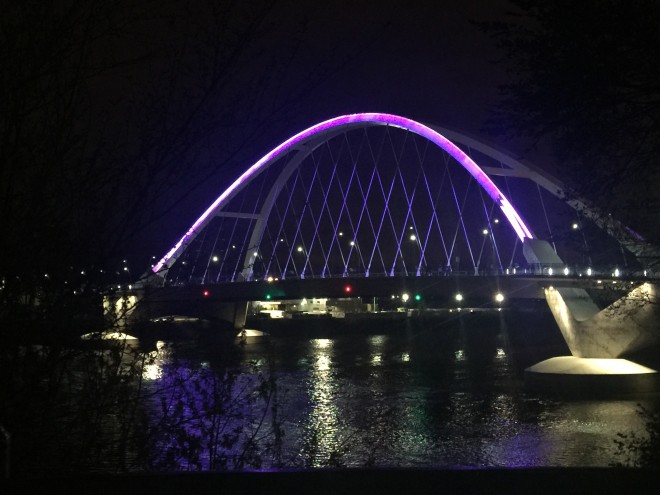 The Lowry Avenue Bridge in Minneapolis, MN bathed in purple in honor of Prince, April 21, 2016. Photo by Dennis Sanders.

I just can’t believe all the things people say
Controversy
Am I black or white, am I straight or gay?
Controversy

I saw a report on a news site this morning that said there was a medical emergency at Paisley Park in nearby Chanhassen, where Prince lived.  I wondered if the next thing we were going to hear is that Prince was dead.  Like clockwork, that is exactly what happened.

Living in Minneapolis as I do, the city, well, the state of Minnesota is in a special kind of mourning.  Prince was known worldwide and there are events taking place around the nation remembering him, but Minnesota was home and for many he belonged to the Northstar State. Hell, for a shining moment in the 1980s and early 90s he made Minnesota, a state with a tiny African American population, the soul and funk capital of the world.

I’ve been wondering what made Prince special for me.  I wasn’t a diehard fan. I didn’t go to any of the many events that took place at Paisley Park.  I didn’t go to a concert.  But in spite of all that, he did have an effect on me.

I think the reason I liked Prince is because he was a weird black man.  That was important to a weird black kid in Michigan growing up in the 1980s who didn’t always fit in.  Here was this guy that was talking and singing about race and sexuality, and seemed to cross gender boundaries with ease.  David Bowie did that as well, but Prince looked like me and that mattered. He played R&B fused with rock, Jimi Hendrix meeting James Brown.  He was someone that could sing really graphic sexual songs (think, “Erotic City”) one moment, and then sing songs that referenced his faith the next (like “I Would Die 4 U”). He didn’t fit in and that was great.

And I think that was important to me.  I was the black kid that didn’t act like all the other black kids.  I was the one that got teased and called gay or even fag.  I was weird and in my teen years, it seemed that being black and odd weren’t supposed to go along.

I don’t think I knew it back in the 1980s, but his willingness to be black and odd may have helped me as I struggled to understand my own sexual identity and faith.  I don’t want to make the man into some sort of theologian, but he was able to combine sensuality with spirituality, which were incredibly separated for me as a teen. He may have well been a factor in me not losing my faith as I started to come out as gay in the early 90s.

So, I have to say thank you to Prince for allowing me (and countless other African Americans) to be me; a weird black kid from Michigan who grew up to be a weird black man living in his hometown of Minneapolis. He will be missed, but never forgotten.