Updating The Division of Labor 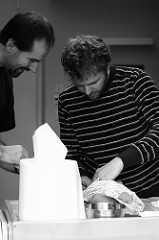 My father-in-law has some false memories. At least once a visit, he mentions having changed his share of diapers. The only problem is that… it isn’t true. In fact, Clancy’s mother can’t remember him once having done so. Which doesn’t mean that he never took part in the changing of a diaper, but probably means that he never actually changed one. The first couple diapers are the hardest ones, and if you don’t know what to do and your spouse does, you get help! And if his wife did help him, she would likely remember that.

I find his need to have created this memory to be an interesting thing. Perhaps it’s related to a need of having taken a larger parental role than he did. He was a division-of-labor person, though, which meant that he viewed his job as bringing home the paycheck and his wife’s job as taking care of the childrearing. Which was not an uncommon deal at the time, and is not an unfair deal, but that was the deal and it did not involve him changing diapers, bathing the kids, or anything of that sort. It involved disciplining and helping with homework, for the most part, as well as playing with them and going to organized events as time permitted.

If my father changed diapers, he never mentions it. I wouldn’t be surprised if he did, but it was not a part of their division of labor. What he did do, though, was give us baths. When this started, Mom was a bit taken aback because she figured that would be something that she would do. It hadn’t been discussed, but apparently Dad did it because his father did it for him. So naturally, that fell in the Dad realm. There are also logistical reasons also why it does make sense. Basically, for the same reason that Clancy more often than not reads Lain her bed-time stories. Since she misses out during the day, it’s a chance for some concentrated quality time. In a break with the Truman tradition, I do the bathing. Often because I’m getting started while Clancy is settling in arriving home after a long day at work.

Acculturated has a couple of pieces, one by Jonathan Last and another by Ashley McGuire, on Ashton Kutcher’s desire that men’s restrooms should have changing tables.

Honestly, it’s not really a problem I’ve had. Or perhaps I simply take for granted that men’s restrooms won’t all have changing tables. I figure, perhaps wrongly, that’s true more generally. When I don’t see one, it’s usually because it’s a small bathroom. Or, at least, I don’t see a good place where one should go and yet is not there. There could be an issue with the original layout of men’s and women’s restrooms where the latter are larger and therefore are more likely to have the space to begin with. That would be a grandfathering problem. Either way, experience is kind of built in.

I change Lain’s diaper around 99% of the time, even when Clancy is around to do so. I’ve become quite the expert at doing so quickly. Lain also seems to put up less resistance when I do it, for whatever reason. Last writes:

Fathers run the gamut in terms of what duties they assume. My wife and I don’t keep score, but I do a lot of diaper changing. Because we’re all hostage to our own experiences, I assumed this was the norm. Then a few years ago I found out that one of my friends does zero diapers. As in: None. Through two kids. This arrangement seemed freakish and weird to me, but his wife doesn’t mind and his kids turned out great and they’re a happy, wonderful family.

By the same token, I always assumed that husbands and wives fight through the midnight feedings and sleep training wars side-by-side. But then another buddy of mine admitted that every time his wife had a kid, she and the baby would spend the first several weeks in the in-law suite in their basement. This way he could stay upstairs in their bedroom and get enough sleep to handle the other kids and his day job. When he first told me about this arrangement, I was kind of gob-smacked. I didn’t think marriage could work like that. But some of them do. And they can work really well. (When I joked with him about his wife’s omni-competence, he deadpanned: “She’s like a Terminator sent back in time from the future. And I’m just hoping her mission is for the good.”)

When Lain was tiny, Clancy did almost everything. Which sounds great, but it strained her and left me feeling pretty bad considering she had to get up and go to work in the morning and I did not. I offered pretty regularly to help her, the logistics of it all were that it made more sense for her to do most of the tasks. A lot of them involved her boobs, which give milk in a way that mine do not.

It also had to do with how we were raised. Women, it really seems, are raised to be childrearers in all sorts of subtle ways that men are not. While I had to tendency to assume that her knowledge of the intricacies of taking care of a little one involved her medical training, she has assured me repeatedly that they do not and it’s just stuff she has picked up over the years. Guys don’t especially talk about these things even in passing. So even the things that did not involve boobs, I just hadn’t the slightest clue how to do. And no matter how we handled our domestic arrangement, there are just instinctual or conditioned assumptions about who will do what. They’re hard to unravel.

Over time this faded by necessity and I simply had to start doing more because I was around and she wasn’t. I have the added benefit of having a poor sense of smell, thus making diaper-changing (for instance) a comparatively Trumwill-friendly activity.