OSC: Southern Tech vs The SS 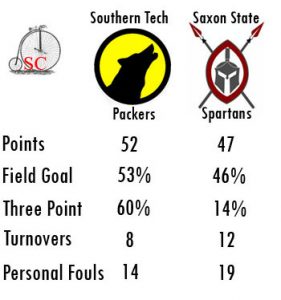 KELLY: Welcome to the Ordinary Sports Channel’s half-time show. We’re here in the first round of the Eastern Metro Conference tournament and it’s been a surprisingly good game!

BLUE: That’s right, Tod. Southern Tech came into this game with a decided advantage considering all of the injuries that Saxon State has had all year, but they’re really hanging in there! Down by five in a very high scoring game.

KELLY: Yes. The Packers obviously have the advantage here, but the Spartans showing real grit.

TRUMAN: Are we done with this yet?

KELLY: I’m sorry? Done with what?

BLUE: It seems to me that the Spartans are within five. Given that three of their players are walk-ons who came in to replace injuries, it’s really impressive that they made the tournament at all much less…

TRUMAN: The only reason everyone seems to happy to pat Saxon on the back is that Southern Tech is so thoroughly and embarassingly superior. That’s it, really.

TRUMAN: I’m glad that we agree that my Southern Tech Packers have been crushing it this year. It’s important that this game start with some common ground…

KELLY: You didn’t let me finish. What I was saying that Southern Tech has had a great season and that’s why it’s so frankly surprising to see Saxon playing so hard. It’s the closeness of this game that is interesting.

TRUMAN: I know you didn’t go to a math an engineering school, Tod – you probably went to Saxon State – but where I come from 52 is more than 47. To be blunt, it’s really embarassing that you’re pretending otherwise. But I’m glad that you agree that Southern Tech is superior to Saxon State in every way.

KELLY: Wait, that’s not what I…

TRUMAN: Do I really need to bring out a math book? I’m trying to find some common ground here, and you keep shilling for Saxon.

BLUE: Nobody is arguing that 52 – not 53 – and 47 are equal. All we’re saying is that this remains a competitive game. Can we talk about the game now? Southern Tech is doing a great job at the three-point line, shooting at over 50%. 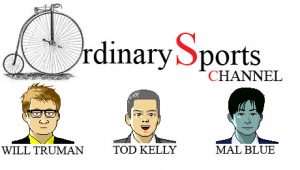 KELLY: Butch Haskell has just been on fire.

BLUE: They do need to be worried about his four personal fouls, though…

TRUMAN: Saxon State has almost twice the number of fouls as Southern Tech and you’re going to fixate on four by Haskell?

KELLY: Almost twice the number? How does that work?

TRUMAN: Fourteen rounds down to ten, and nineteen rounds up to twenty. The math book again. Twenty is twice as much as ten. I was really being generous by saying “almost” but of course since you are both in the bag for Saxon State

KELLY & BLUE: We are not in the bag for Saxon State!

BLUE: We’re just trying to talk about the game, man.

TRUMAN: So am I, but we’re apparently watching different games. Look, no matter what kind of {air quotes} “new math” you use, it’s Saxon State that is committing more fouls and that’s despite the fact that Spartans are flipping around like dolphins trying to get ref attention.

TRUMAN: Oh, come on now, both sides are working the refs.

TRUMAN: Well, Southern Tech really isn’t, but I’m glad that we’re all in agreement that The SS is.

BLUE: I have noticed no difference in the degree to which the two teams have tried to draw fouls.

TRUMAN: Of course not. You have to be all above the fray, which since reality favors the Packers means that you’re objectively pro-SS.

KELLY: Can we not call Saxon State “The SS”?

TRUMAN: They’re the ones that chose the initials. Look, I’m just saying that we can’t talk about this game unless we’re actually talking about the same game. So far we seem to agree that Southern Tech is awesome, Butch Haskell is amazing, and The SS is the worst team to ever play college basketball in the history thereof.

KELLY: How about “Saxon” or “Saxon State”?

BLUE: I don’t think we actually agree on that last point. Saxon State is having a good game.

TRUMAN: Oh come on. Look, even if I were to concede that they are playing above their skill level, that only indicates how absurdly low their skill-level is. Three of the SS players are so bad they couldn’t even get scholarships.

KELLY: “Spartans” would be okay. Or just “SSU”…

BLUE: That’s what makes this team so impressive! Three walk-ons and they’re playing one of the best teams in the conference and they’re only five points back. They’ve overcome serious injuries…

TRUMAN: Injuries are just excuses with casts. All I see here is that you guys are straining to be {air quotes} “fair” while the SS can’t even even hit one three-pointer out of four and their players are committing foul after foul as they stalk the court like they’re the real SS hunting j-

KELLY: Aaaaaaaaaaand, I think we’re just going to turn this over to our sponsors and back to the g-

TRUMAN: I’m not done yet.

TRUMAN: I just wanted to say that it’s days like today I love working for OSC. A friendly conversation about the great game of basketball with die-hard Saxon State fans is what it’s all about.

KELLY: Yeah, okay. Anyway, back to the game for the second half. We’ll be back for the post-game wrap-up, agnostic god help us all. Thank you for watching the Ordinary Sports Channel.