Blast From The Past: My Problem With St. Patrick’s Day 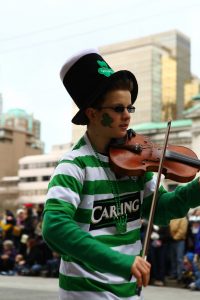 St. Patrick’s Day is America’s favorite ethnic holiday. It is also the strangest. In a calendar crowded with Cinco de Mayo, Kwanzaa, and gay pride parades, St. Paddy’s is the one chance for the white, middle-class majority to dress garishly and get drunk while celebrating a history of suffering overcome.

No doubt, most St. Pat’s revelers have been motivated by nothing other than the desire to have a little fun. But it’s worth asking why this desire took the form it did. Many white Americans really are Irish, of course, but the reason so many white people of all ethnic backgrounds celebrate this one ethnic holiday rather than, say, Oktoberfest, goes deeper. It would be a little weird, not to say unseemly, for Americans of English or German descent to parade in the street celebrating their ethnic heritage. To do so would be like dancing in the end zone of colonial history. And so, because the Irish were actually the subjects of discrimination and oppression, Irishness has become the go-to white ethnicity.

St. Pat’s isn’t the only example of this cultural phenomenon. When Margaret Mitchell set out in Gone With the Wind to create a narrative of white suffering and triumph, she chose an Irish protagonist with green eyes and a green dress. Scarlett’s father, Gerald O’Hara, a proud Irishman who named his plantation ‘Tara’ after the ancient seat of the high kings of Ireland. This is a strikingly explicit ethnic background for a family meant to represent the overwhelmingly Protestant and Anglo Reconstruction- era South. But her unusual choice makes perfect sense. In order to tell a narrative of white suffering that would not seem laughable beside the injustices visited on enslaved blacks, Mitchell had to turn to the one group of whites that had been oppressed: the Irish. Thirty-million books, a Pulitzer Prize, and an iconic film later, a white southern lady had displaced Uncle Tom as the great American symbol of injustice suffered.

Being half Irish myself, I think there are many good reasons to celebrate St. Patty’s, not least Ireland’s impressive religious and literary heritage. But I think it is weird that one of the reasons the holiday exists is to give the privileged a chance to dress up in the drag of historical oppression.