Neil deGrasse Tyson is a fantastically intelligent human being. Here are very many facts about him which prove the point. But, alas, he is still human, and thus prone to same occasional overreach that almost all of us are, as evidenced by this tweet he sent out several days ago:

Now, as already established, Dr. Tyson, super-astrophysicist, is an absurdly smart guy. Wildly, crazily intelligent. Brainy in a way that I cannot imagine. But, if you’ll look closely at the tweet above, you’ll notice that he is straying beyond his own (incredibly vast) area of intellectual specialization. And even if you grant the obvious certainty that he almost certainly knows (very much) more than the average bear about a great number of topics that fall outside of his own areas of expertise, he is still bringing a layman’s understanding of animal boot-knocking (in the parlance of our times fifteen years ago) when put up against people who actually study this sort of thing. And also weirdos.

You can put me firmly in that second camp.  Before we take a spin over there though, it should be noted that animal-sex afficionadoes (that can’t be the right phrasing) were all over Tyson from the jump, hitting him with obvious and well-known examples of painful animal procreative proclivities like:

I’ll take penile spines evolved to, uhhh, let’s just say “maintain connection” because good lord, the reality is somehow worse than the phrase “penile spines” for $100, Alex. THE REALITY IS WORSE THAN THE PHRASE PENILE SPINES. Just want to emphasize that. See this guy right here – 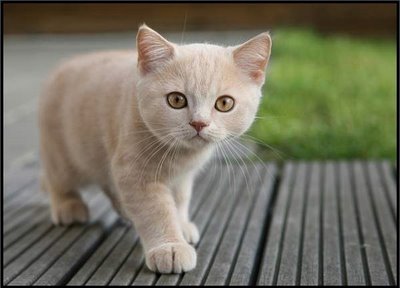 He has penile spines and is a horrific monster. SO ADORABLE!

Remember all the way back, ten seconds ago, when we were discussing penile spines? Remember how awful that was? Anyway:

What’s so awful about that, you’re wondering? Let’s do it again, but this time, I’ll highlight some key phrasing:

Here’s a whole article about this horrifying nightmare fuel if you’re not yet convinced. Would you like a gif of a muscovy’s penis, for some reason? (Also, do not click on this link.) Here. Now, understand that what the female ducks have done in response, apparently, is evolve vaginas corkscrewed in the opposite direction as as a defense against these animals. How bad did things get at lady duck headquarters before the decision was made to evolve vaginas corkscrewing (that’s a terrible term to be using, all things considered) in the opposite direction?  Pretty bad, I’d wager.

The clinical term for what bedbugs do is “traumatic insemination” which, GAHHHHHH, so all the more I’ll say about is this brief description:

Which brings me to weirdos: me. Yes, scientists have their favorites, and yes, many of these examples are far closer to our lives than my own, but there’s still no shaking the Humboldt Squid‘s approach to reproduction. Start with the fact that this reproduction is occurring in the dark of the ocean. Add in the fact that squid have a penis-like appendage. Finalize with the fact that they definitely want their sperm to go somewhere, ideally in a lady squid, ideally near something that will find the sperm useful.

What do you have? An animal that cuts into its mate in multiple locations, inseminates the wounds, and just sort of hopes that something ends up working out biologically. And this process can work even after the squid is dead as in the case of this South Korean woman. *retches*

And then there’s this:

Males that produce sperm packages that can penetrate deep into the skin. Females with bellies full of stored sperm. Males that seriously injure the females during mating. This is just a selection of the bizarre reproductive techniques that marine biologist Henk-Jan Hoving has discovered with different species of deep-ocean squid.

*sonorous voiceover voice* Nature: It’s Horrifying And Awful, All At Once

Dr. Tyson is right about so many things but, unfortunately, he overstepped his area of expertise in regard to animal sex. Cmon now. CMON!

But, to be fair, he did sheepishly acknowledged his own faux pas: 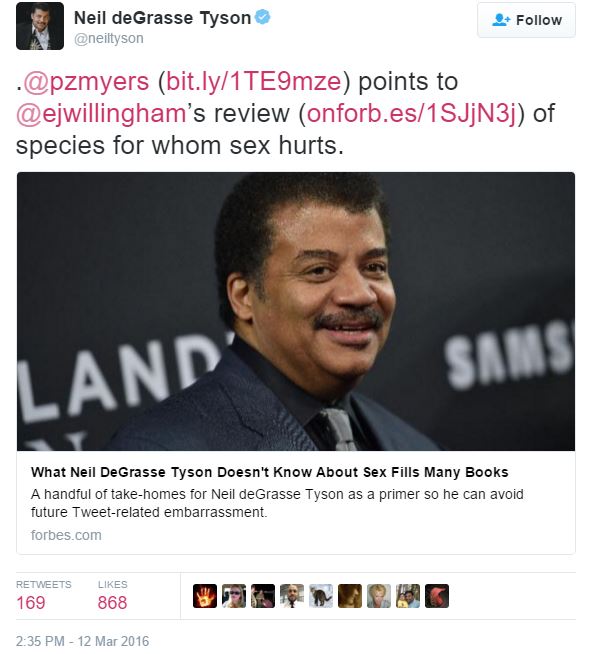 So at least he’s smart enough to know when he’s wrong.