Last week we talked about how the new Master of Orion game was likely to ruin everything. As such, my recommendation was to pick up the Master of Orion 1 & 2 bundle from GoG.com for a mere six bucks…

However, that might not be enough to fill the Master of Orion hole that you have in your heart. You may wish that you could capture a bit of the old magic again. Well, I have some good news: I found a board game that captures it. The board game is called:

Let’s get the bad stuff out of the way first: There are approximately one jillion pieces to keep track of. If you hate games where you have to deal with, no exaggeration here, 60-80 pieces on your own personal game board (and that’s *PER PERSON*), you will hate this game. It takes 20 minutes to set up if you’ve played before and longer than that if you haven’t.

Also, it’s a little bit complex. You’ll need a patient guy who can act as guide and mentor if you can get one. If you’re at a table full of people who have never played before, somebody is going to get frustrated.

That said: If you can get past both of those issues, you’ve got a really rich tabletop gaming experience ahead of you.

Every player gets a placemat. On the placemat are a bunch of little squares and circles that get covered with tokens. (Here’s a picture that I lifted from Hyperbole games blog that will give you an idea of what I’m talking about): 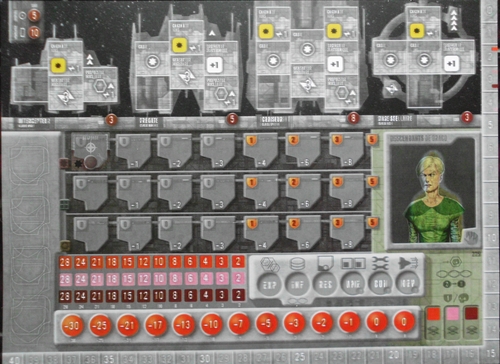 WARNING: at this point in the post, you may wish to scroll to the bottom if you wish to avoid board game minutiae.

For those of you still here: see all of those number squares there near the bottom of the game mat? Those are mostly covered by little cube tokens. The orange ones are economics, the pink are science, and the brown are mineral resources. Cover aaaaall of them up. See the circles with the negative numbers on them? Cover all of them with the disk tokens. These tokens represent how much it will cost to do any given thing.

Now, when you start with your homeworld, you will take a disk off and place it on your home system. Each of the planets on your homeworld will have little squares on them and you’ll take the rightmost appropriate cube off of your mat and place it in the square. Look over there at the numbers on the right. See the little colored lines? Each of those lines represents a starting amount of the goods that you have. Since you’re a human, you start with 2 money, 3 tech, and 3 resources.

So when you have your first turn, look at the little discs covering the negative numbers. Remove the rightmost disc and move it to the little circles above. You can:
EXP = Explore
INF = Influence
RES = Research
UPG = Upgrade
BUI = Build
MOV = Move

Each one of these does different things, want to explore the universe (take a random tile from the pile and place it on the map)? Wanna populate the planets you’ve discovered? Wanna research some tech? Wanna build a ship? Wanna upgrade your ship? Wanna move it into your opponent’s square and start blasting?

So move a disk to one of those circles. But beware: you see how there’s a minus under that? That’s how much money you have to count down from those numbers on the right. (And you can trade 2 for 1 from tech or resources to make ends meet.) So if you want to do one thing, use one disk. Do two things? Use two. And on and on. And I’m sure you see how each move costs you more and more money. (And at the very end of your turn, you gain money, tech, and research based on how many squares you’ve distributed… at the end of the first turn, you’re probably going to be making 2 or 3 of each… by the end of turn 5, you might be making 10 or 12.)

The map dynamics of the board are fun. It’s a system that uses tiles. Your home system is set up a couple of empty spaces away from the very center of the board which has the planet that we, at our gaming table, refer to as “Orion”. It’s a planet that has massive resources to plunder, tech upgrades for free, as well as a giant alien ship with decent weapons and decent armor.

As you play the game, you explore the universe, conquer systems, develop tech, build ships, engage in diplomacy with your fellow players, maybe stab your fellow players in the back, get in space combat, and basically have a blast. Then spend 10 minutes collecting the various pieces and getting them into the proper Ziploc bags.

It’s truly an awesome game and, yes, is intimidating as heck the first time you play but the second time? It feels like Master of Orion.