Why was this Officer Held Responsible for his Actions?

One little story that didn’t even make the New York Times top-ten-most-viewed articles list is nevertheless blowing up on Chinese social media networks.

The state has convicted first NYPD officer in over a decade for an in-the-line-of-duty shooting. And he’s Chinese-American. 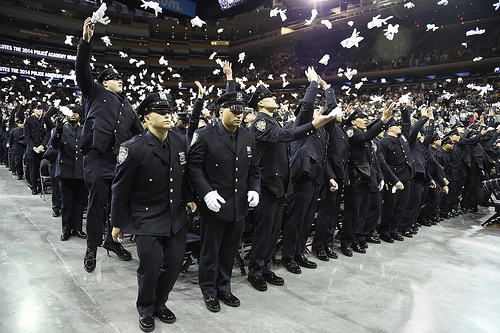 The actual story seems tailored to incorporate as many things that are wrong with America as possible. Two police officers, one “a probationary officer with less than 18 months on the job,” were entering a “pitch-black” stairwell at a Brooklyn housing project. A couple who had been waiting on the elevator grew frustrated and entered the stairwell on another floor. The officer shot a single round, and it ricocheted and hit the man, black, who later died. There is apparently “a longtime police practice of officers drawing their weapons when patrolling stairwells in housing projects.”

That was November. He was convicted Thursday of manslaughter and faces up to 15 years of prison.

I only read about all this after hearing of it from the better Bath. After reading the NYT coverage, I had to confess to her that a conviction seems appropriate. If someone were to shoot me, even accidentally, I’d want them to face some sort of punishment if they could have reasonably foreseen the risk they were creating.

What then-Officer Peter Liang did was illegal. He is guilty of killing an innocent man, and it is just and right that he was convicted.

But why are we enforcing the rules now? We have officers gang-choking people in the streets on videotape, and they don’t get indicted let alone put on trial and convicted. In this case, the responsible was convicted and is serving jail time, while his partner, who failed to provide aid to the dying man was given an immunity deal.

Liang’s own lawyer seems to discount race playing a part in the conviction:

“People of all races are saying that if Peter Liang were not Chinese or were not a person of color, maybe he wouldn’t have been convicted,” said Robert E. Brown, one of Mr. Liang’s lawyers. “I honestly don’t know. I don’t think that our jury deliberately said, ‘Let’s convict this person because he’s a person of color.’”

It’s remarkable that a defense lawyer in 2016 in New York City would could harbor such a naive view of how racism works. Contrary to what some say in the linked piece, Liang wasn’t thrown under the bus. He was simply not rescued from his own actions as so many of his peers have been–including every one of them who fired a gun while on duty in the past decade. No one went out of their way to save his less-than-18-months-on-the-force (and Asian) hide.