Who are Discrimination Laws Meant to Protect?

Perhaps there has been a time when someone said. “Black lives matter!” and someone responded by asking, “Don’t all lives matter?” – and the first person said, “Yes, that is indeed true, but not incompatible with the idea that black lives matter.”

Perhaps that has happened, but if it it has, I haven’t seen it.

This is interesting because superficially this is just grammar. Couldn’t Black Lives Matter rename itself All Lives Matter tomorrow without any loss of meaning? Instead, when someone else asserts that all lives matter, they actually get angry at the person who says it, and 90% of the time they are right to do so because the person saying “All lives matter” isn’t trying to get them to be more inclusive but is instead trying to score points.

“Black lives matter” and “All lives matter” have identical meanings on a superficial level, but you can tell who hates who by looking at which saying they choose. That is weird.

On the other hand, maybe BLM and ALM really are different.

Here’s is some of California’s Unruh Civil Rights Act:

All persons within the jurisdiction of this state are free and equal, and no matter what their sex, race, color, religion, ancestry, national origin, disability, medical condition, genetic information, marital status, or sexual orientation are entitled to the full and equal accommodations, advantages, facilities, privileges, or services in all business establishments of every kind whatsoever.

Ken White at Popehat comments that

Ken links to a Yahoo article that describes what happened:

Two men named Allan Candelore and Rich Allison, who had each prepaid a $20 registration fee on the Chic CEO website, tried to enter the restaurant. According to a legal complaint that they later filed with National Coalition for Men president Harry Crouch, Burns turned them away at the door, saying the event “was only open to women.” They took a photo, left the premises, then promptly initiated legal action, turning to a 1959 California law originally written to prevent discrimination against minorities and women.

Frankly, the lawsuits are ridiculous. But more than that (so much more than that), there’s a special kind of insult in taking an anti-discrimination law intended to protect marginalized people and twisting it to “protect” those least in need of protection. It’s sad, to be honest, that men’s rights activists (ughh) can exploit something like that to effectively shut down organizations and companies like Chic CEO trying to improve female representation in tech and other industries.

The threat of a lawsuit is usually enough to shut a company down, even if the company stands a good chance of winning in court, simply for one reason: it costs less to settle than it does to fight in court. With the knowledge of a likely easy settlement, plus precedent on their side, how messed up is it that this is a weapon that can be used to stamp out organized attempts at improving representation before it even begins?

This is true of a lot of stuff that came out of that time period. If I read someone today saying that they want people to be judged by the content of their characters rather than the colors of their skins, and, if I hadn’t already heard the phrase before, I would guess I was reading a very white, religious conservative.

But what is the Unruh Act really? Is it the deeply conservative document it now reads as? Or is it a law meant to protect the marginalized?

I don’t see why it can’t be both. It’s a deeply conservative document that was meant to protect the marginalized. The conservatism can’t be excised without changing the law. It’s the same style of conservatism expressed by Obama, Clinton, Sanders, and American liberals in general today:

[D]irectly anti-racist remedies have disappeared from the left-wing of the Democratic Party. 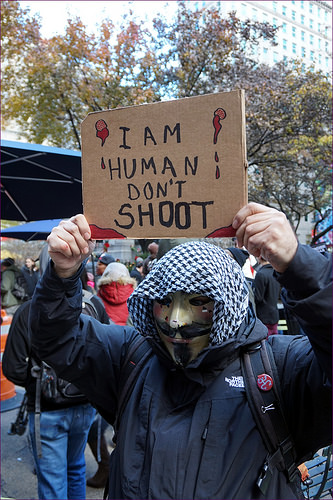 Image by The All-Nite Images

I don’t think a law tailored to protect only women and blacks — those traditionally considered to be marginalized — would have passed in 1959, and it’d have trouble in 2016 as well. It was important that at least nominally the law could conceivably be construed to protect white men too. And that’s what it ended up doing.