A Date With the iRobot Braava 380t Floor Mopping Robot

@vikrambath1 I can't help but notice the lack of a review of your new Roomba.

There’s a reason behind my reluctance.

I’m not happy with it.

I got an iRobot Braava 380t Floor Mopping Robot last year. My expectations for cleaning quality were bottom-of-the-barrel low. I knew the machine has a footprint of something like 8 inches by 8 inches. I knew it wouldn’t do well with small spaces, under chairs, and near walls and corners–all places where dog furballs accumulate. I wanted something to strictly manage things between cleanings–to avoid having the house become too terrible.

And the iRobot does do that. It scoots itself around my oddly shaped living room and picks up some dirt on its microfiber pad. It doesn’t do a perfect job, but it is significantly better than nothing. Its cleaning ability met my low expectations, and if that were all there was to it, I’d recommend it to anyone with similarly moderated expectations.

What I failed to anticipate and now feel stupid for not having considered, is that the Braava is not a maintenance-free mopper that does your mopping for you. Rather, it is an additional device in your life that you have to maintain and manage on a daily basis for it to do what you want it to do.

When the iRobot has done doing its halfway decent job, I have to pick it up, carry it to the trashcan, open trashcan, and remove the microfiber cleaning cloth.

Oh, and there’s the remote locator thingy that you have to turn off too. 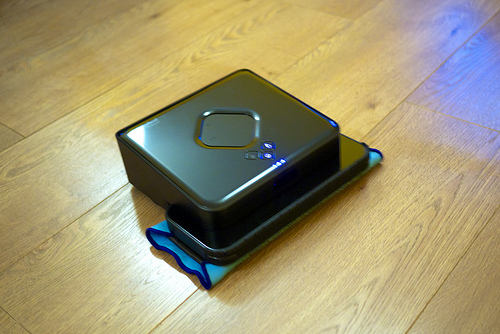 Then, you take the machine back to the charger and let it charge for the next use. I’d say you just drop it in by its handle, but the handle is on the same side as the charging connectors, so you can’t just casually drop it in. This is a trivial little design detail, I know, but I would think iRobot would know that the kind of people who buy robots to clean for them want things to be convenient.

Before cleaning, you have to turn on the locating cube and take the main unit out of the charger and put a new cleaning cloth on (which it does not ship with). All told, I question if I am saving time over using a broom.

Unfortunately for the fate of the iRobot in this review, I can’t figure out who this is for. If you are a clean-freak, you will go crazy as the machine seemingly avoids picking up the tumbleweed-style dog hair that accumulates in our household. If, like me, you are tolerant of such flaws but just want a device to save you time, you will also go crazy because the machine just added a few tasks to your list.

The iRobot has many happy owners. The device is highly rated on Amazon. I doubt they can all be wrong, but I, for one, can’t figure out what they see in the thing.