The Trouble With Curious George 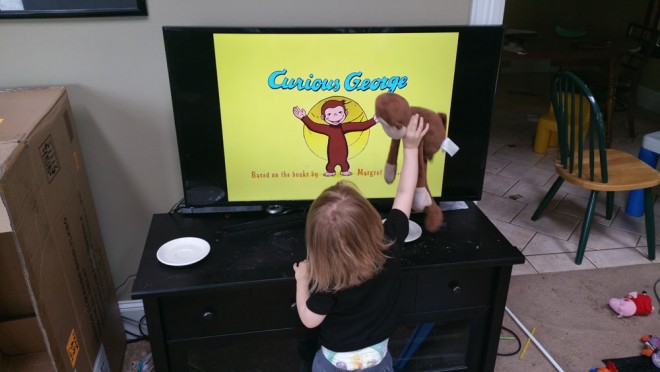 In the Curious George books, the plots follow a pretty narrow pattern. The Man in the Yellow Hat and George go somewhere together. George, who is a good little monkey but always very curious, will then do something he’s not supposed to do. Havoc follows. But by the end things somehow end up working out and George gets some sort of treat.

Lesson: Misbehave, and everything will be okay!

The problem with this seems to have been noticed by the makers of the TV show, who didn’t follow that pattern. The TV show is actually quite good. Through George, kids learn how things work from virii to sewer systems. She’s too young to understand what’s going on, though. But George really cracks her up.

The problem with the TV shows is that, of course, George can’t speak. Nonetheless, he is able to communicate with ooh-ooh-ahh-ahh and gestures. So if George wants to know how something works, he goes ooh-ooh-ahh-ahh and gestures, and Yellow Hat (or whoever he’s talking to) knows precisely what he means. This itself wouldn’t be a problem but that we’re trying to get Lain to use her words. I’m beginning to suspect that George is suggesting that she doesn’t have to. Since watching more of that show, she’s been doing a lot of grunt-grunt (sometimes something pretty close to ooh-ooh-ahh-ahh) and looking at us with great expectation that we will know exactly what she wants.

I mean, I assume this is an issue with all kids, and that this would be an issue with her whether she was seeing the TV show or not. But… it doesn’t seem to be helping. Which may mean we need to stop watching that particular problem in favor of Daniel Tiger’s Neighborhood (Mr Rogers’s successor), which actually has a specific episode about Using Your Words. I don’t like Daniel Tiger’s Neighborhood all that much, though, because… well, it’s not Mr Rogers and I’m not sure about the direction where they went with that. Still, it’s at least better than that dreadful Cat in the Hat cartoon.

She likes Daniel Tiger okay, but I’m not sure there’s anything she likes more than Curious George.

A couple of asides: 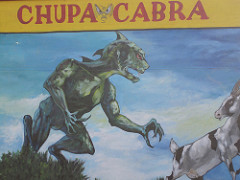 Am I the only one who thinks monkeys make the sound ook-ook-ook? That was what I taught her. I don’t mind that Curious George undermined that, but Clancy says she has never heard ook-ook-ook before.

If I had art talent, I’d do a series of children’s stories called Chuy the Chupacabra. It would be a lot like Curious George, except that it would teach children about the intricacies of interaction with the government. Instead of an episode where George goes to the pancake supper and starts making pancakes when he shouldn’t but everything ends happilly and he’s invited to make pancakes againt next year, Chuy will make tacos and someone is going to call the Health Department and the Taco Festival will be canceled and lawsuits will cause the organization throwing the benefit to have to shutter its doors.

That’s a lesson she needs to learn!