Brokered Convention: Nothing To Worry About

Reportedly, the Republican National Committee has taken the uncharacteristic step of preparing for an eventuality. The bigwigs gathered together and discussed what to do if there is no nominee by the time the convention rolls around.

This gave rise to paranoid fear of a brokered convention, which apparently means that the RNC swoops in to anoint Jeb Bush as the nominee. Or something.

If this was the beginning of a plan to subvert the will of the voters and replace it with the will of the political elite, I assure you Donald Trump will not be the only one leaving the party. I pray that the report in The Post this morning was incorrect. If it is correct, every voter who is standing for change must know they are being betrayed. I won’t stand for it.?— Dr Ben Carson

After seeing this kind of misinformation, I decided to go through the different scenarios and explain why there’s nothing for Republicans to worry about. 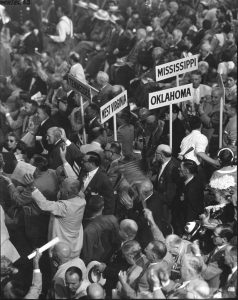 And now I’m going to explain why 3 (two top candidates) is more likely than 4 (delegates split between 3 or more). Since the ‘70s, our candidates are picked by the primaries and caucuses in each state. Some of them haven’t really been major contests, as one candidate had a clear lead from before the primaries (e.g. incumbents, or both parties’ 2000 contests).

Others have been more contested, but all of them had one person win a majority of delegates. There’s a conventional wisdom that this year’s deeper field makes it more likely that no one wins, but I looked through the different years and that’s not what I found. Every time there was a large number of candidates, even a large number who won primaries, (think GOP in 2012 & 2008, Dems in 2004, 1992, both parties in 1988), one candidate clearly took the lead early on and had the nomination in the bag before ¾ of delegates were awarded. In fact the only times it got further than that was when two strong candidates battled it out to the finish line, 2008 for the Democrats and 1976 for the Republicans. I don’t claim to know why in a multiple candidate race one surges ahead, but I don’t see why this election will be different. Republicans will have a candidate by May.

Guest Poster JayFromBrooklyn is an amateur political scientist and blogger who lives in Brooklyn. He maintains a Medium page and is active on Twitter.