Neither Here Nor There

There is a scene in the first season of The West Wing in which President Bartlet is discussing gun control with Vice President John Hoynes of Texas. Bartlet is trying to get Hoynes to sign on to prohibit concealed handgun carry. In what I’m sure was a QED argument in writer Aaron Sorkin’s head, Bartlet asked, if guns are supposed to deter violence with their presence, why should they be concealed. One can imagine the “Boom!” in Sorkin’s mind as he expressed this. There may be a point there, but what it eludes is that largely the same people that object to concealed carry also object to open carry. From my own perspective, there are arguments for why guns should be visible and arguments for why they should be hidden, but if you’re arguing whatever is in front of you it becomes clear that the “carry” is the problem rather than the “open” or “closed.”

A week or two back, Jaybird sent me this link about HUD’s plans to ban smoking in its housing:

“What I do in my apartment should be my problem, long as I pay my rent,” said Gary Smith, 47, a cigarette in hand as he sat outside the door to a building in the Walt Whitman Houses in the Fort Greene section of Brooklyn.

The impact of the prohibition would be felt most heavily by the New York City Housing Authority, which is known as Nycha and houses more than 400,000 people in about 178,000 apartments. Though it is the largest public housing agency in the country, it has lagged behind many of its smaller counterparts in adopting smoke-free policies.

Since the federal government began to press for smoking bans in public housing in 2009, more than 600 agencies encompassing over 200,000 households have voluntarily barred indoor smoking. In moving to require the prohibitions across the country, federal officials say they are acting to protect residents from secondhand smoke, which can travel through walls and under doors; to reduce the risk of fires; and to lower building maintenance costs. 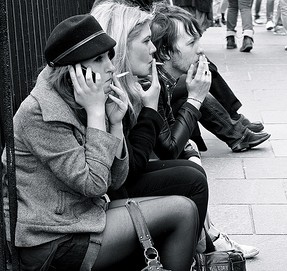 This seems like the sort of thing that would rile me up, but… it doesn’t, for the most part. Mainly, because from what I’m reading this would mostly bring public housing in line with private housing. Which is to say that landlords – including the government – have their own incentives apart from social engineering to prohibit smoking in their apartments. Smoking represents a fire hazard. It smells, obviously, and can be difficult and costly to clean. If the places are furnished (which I suspect, though don’t know, they might be), you do get cigarette burns on the furniture. So all of these reasons make such a prohibition pretty valid.

The reason given is characteristically weak, however. A lot of the people who live here live alone, and with other smokers, and no distinctions are made. While smoke can escape into neighboring apartments, it’s less likely to be an issue if they smoke indoors than if you push them outside.

Which brings us to the other side of things. The Bartlet/Hoynes discussion. There are arguments for why we would want smokers to smoke indoors, and arguments for why we want to push them outside. Each offer their own set of benefits and drawbacks. Indoors is more likely to cause acute distress among people in whatever room it is occurring. But outdoors makes it harder to avoid. But if smoking is to be legal, it does need to be legal somewhere. This applies both to indoors/outdoors discussions and location more generally. And as we’ve banned smoking in public places, there has been the implicit agreement that they should be able to smoke in their own private places. Now, of course, that too is being questioned.

The new HUD regulation has opened up a flurry of advocacy over at Vox about smoking bans generally. Dylan Matthews says – with obvious lament – that we can’t ban all indoor smoking even though it would be more fair. 1 German Lopez endorses the idea anyway. This is ostensibly due to concerns over second-hand smoke, but it relies on shoddy data. And while at present there are no plans to include ecigarettes in the mandate, they’re discussing it despite there being little indication that the justification of the fear carries over. Almost all movement on ecigarettes has been towards including them in smoking bans. 2

Doing so, of course, will push people outside and their smoking into more public areas. Except that we’re trying to move smoking out of public areas. Which pushes it back inside. But we don’t want people smoking inside. The government has the ability to influence people through HUD, but that’s unfair to people who rely on government housing. So, for the sake of fairness, we should consider making it uniform. If they can’t smoke here, why should they be able to smoke there? If they can’t smoke there, why should they be able to smoke in that other place?

The ostensible rationales for these policies are getting lost in the shuffle, in part due to the desire for uniformity. The only uniformity that can occur is either to allow smoking anywhere or to allow it nowhere. The first is unacceptable, and most people know better than to expect the latter. But to avoid being un-realistic and unfair, we need to answer the basic question of where we should consider smoking to be permissible. It’s not clear that we have any place in mind.