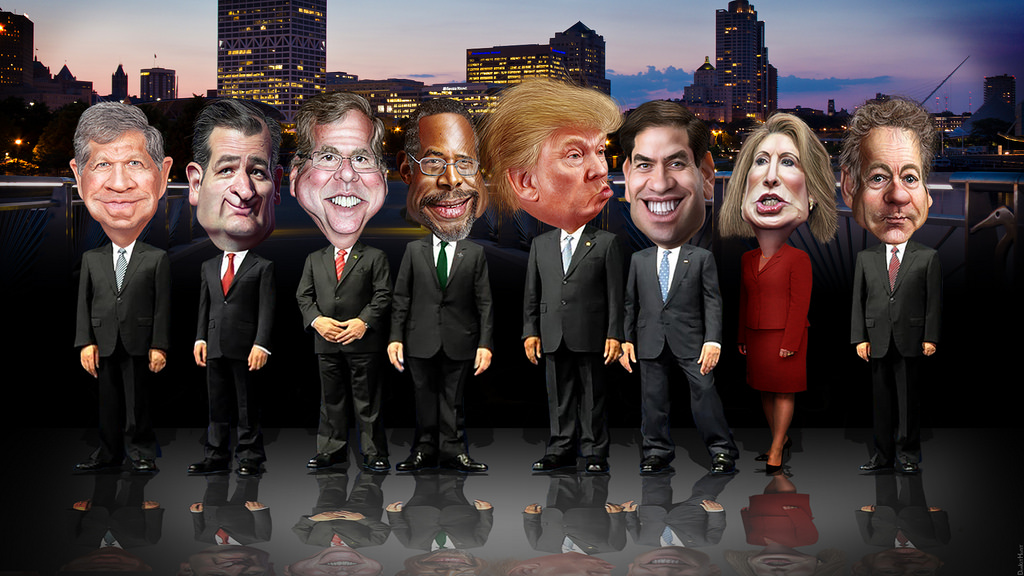 First, a confession. I didn’t watch the whole debate. I didn’t even watch to the halfway point. Faced with the prospect of listening to nearly two more hours of blathering, I bowed out at an hour fifteen minutes in.

Second, an admission. I usually drink hard liquor when I watch these things in order to make them bearable, but I exhausted my Scotch supply a couple of weeks ago and haven’t had a chance to replenish it.

I skipped the CNBC debate, which, given the amount of post-debate gnashing of teeth and rending of garments on the part of GOP leadership, must have been a truly harrowing experience for the candidates, leading the RNC to write off NBC altogether. The folks at Fox Business Channel obviously took note. When not identifying the Democrats as the party of free stuff, they lobbed softball questions at the candidates with rarely a follow up lest they bruise a whiny candidate’s delicate sensibilities. The result was pretty much a snooze fest.

We did get to learn, however, that the candidates have never met a tax cut they didn’t like or a regulation they did. Democrats may want to give you free stuff, but Republicans will fall all over themselves offering tax cuts, mostly without bothering to explain how they’ll also cut the deficit to nothing. The elder Bush referred to this phenomenon as “voodoo economics.” And, boy, Republicans, “that voodoo that you do” 1 with basic mathematical concepts knocks me off my feet.

Cruz, for example, plans to cut income taxes back to a flat 10 percent for everyone, while taxing businesses at a flat 16 percent. And, by the way, no taxes on the first $36,000 you make. Plus, he’s going to eliminate the death tax (otherwise known as the estate tax) and the payroll tax. But Ted, you might ask, if you eliminate the payroll tax, what happens to Social Security? Who knows because none of the moderators, having sworn a blood oath not to do anything that might offend a GOP candidate, bothered to inquire.

It probably won’t matter anyway since Ted also plans to eliminate the IRS, so no pesky government agency will bother to keep track.

Carson wants a 15 percent flat tax because The Bible. Tithing worked really well for those ancient dudes, therefore it will work equally well for us. Ben will provide a rebate for really, really poor people. But if we elect him their numbers will dwindle because they’ll have far more economic opportunities to lift themselves out of poverty than they have now. Apparently, his supporters are expected to accept this notion on faith. Because The Bible.

Not to be outdone, Paul offered his 14.5 percent flat tax proposal complete with no payroll taxes. His inquisitioner thought to ask who would pay the payroll tax. Paul’s answer: businesses. But Ron, will that be sufficient to keep Social Security afloat? Oh wait, that’s one question the moderators didn’t ask. Too offensive, I guess.

Rubio went a different route. Rather than talk about the taxes he was going to cut, he talked about the credit he wanted to award – a vast expansion of the child tax credit because the most important job anyone could have is that of parent. Paul pointed out that this tax credit would cost somewhere in the neighborhood of a trillion dollars and that, when added to Rubio’s proposed trillion dollar increase to the defense budget, would lead to huge deficits. Paul, to his credit, seems to understand math.

Of course, no GOP debate would be complete without numerous offerings to that other foundation of the American belief system: The Free Market. Jeb!, who seemingly awoke from his stupor for this debate, promised a four percent growth rate, and bemoaned the fact that Obama and the Democrats accepted two percent as the new norm. He then went on to blast Obama’s economic record, all the while ignoring the giant elephant in the room, that the American economy crashed and burned on his brother’s watch. Therapists would refer to this as a classic case of denial.

Fiorina, best known prior to her political career for tanking Hewlett-Packard and laying off 30,000 or so employees, also trilled the tune of the Free Market. Repeal Obamacare, she sang. What would replace it, a moderator asked. We can try something we’ve never tried before in the health care industry, Carly crooned. The Free Market. No regulations or nothing. Regulations bad, a sentiment with which the chorus of her fellow candidates concurred.

It’s the same old song initially perfected by Ronald Reagan. First, we cut taxes. Then, we cut regulations, followed by a big increase in military spending. All of this while balancing the budget and spurring economic growth which, while it may seem to benefit mostly the rich, will trickle down to everyone else if only they work hard enough and smart enough. The elder Bush saw through this nonsense, at least when he was running against Reagan, but they’re still chanting it in prayerful conformity.

Clearly, I shouldn’t be watching Republican debates, drunk or sober. It’s bad for my state of mind. At the end of every one of these things (well, more like at the point I decide to switch to another channel), I ask myself: if someone put a gun to my head, and told me I had to vote for one of these characters, who would it be?

My answer: Kasich. Yeah, he’s said some incredibly stupid things about teachers, and he, like the rest of the GOP pack, is a climate-change denier, but, compared to the rest, he comes off as an adult willing, perhaps, to compromise with Democrats when necessary. Willing to do things contrary to GOP orthodoxy, like sign his state up for Medicaid expansion or not dismiss a raise in the minimum wage out of hand.

Last night, he got a bit pushy in trying to get some additional time in the spotlight. But, given his low poll numbers, he probably figures he has to take a few chances to get a hearing for his ideas. He comes off as somewhat sensible.

Which, given the current mood of the Republican base, means he hasn’t got a prayer of winning.