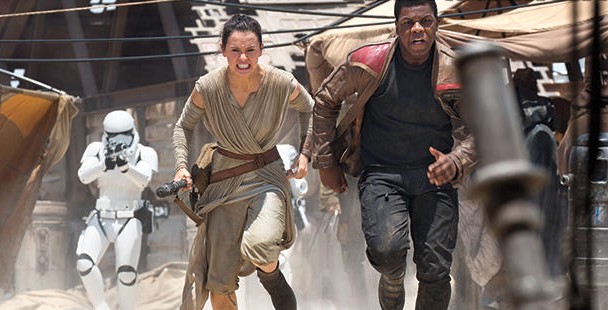 Last week, countless nerds across the globe delighted in the Star Wars: The Force Awakens trailer (our very own Tod commented on it, followed by Dan). Even apprehensive fans, having been burned by the last three films, appeared to actually be joyful to see another Star Wars film on the horizon.

Yet, all was not well in internet-land. Not only were some fans angry about this film’s release, they saw in it a representation of all they abhor in Hollywood. A handful of activists started #BoycottStarWarsVII to voice their disgust with the film’s racial makeup. Some even claimed the film was promoting “white genocide.”

Every media outlet had a field day pouncing on a handful of racial activists, making this little bit of Twitter-nonsense appear more significant than it is in actuality. As far as I could tell, the activists advancing the hashtag were unabashedly thrilled to be receiving such attention. Sites like the Daily Beast and Slate earned ample clickbait covering the “story,” and the activists had their names plastered across the Internet. Everyone won in this less-than-galactic battle.

This wasn’t the first time this group of Internet activists made a stink about a popular motion picture. When the new Mad Max film was released, the very same group complained that making the film’s protagonist a woman was just Hollywood feminizing a “man’s film” for the sake of cultural acceptance and appropriation. (Oddly enough, I found Fury Road to be rather antifeminist in its themes and arc, but that’s for another day).

Richard Spencer of Radix Journal has always been a sharper tool in the white nationalist arsenal than his blunter (and denser) allies. I’ve followed his rise on the Right for some time, and I’ll admit, I find myself agreeing with some of his points from time to time. Responding to the media storm that descended on #BoycottStarWarsVII, he argued against those shunning the film. However, he did write:

Liberals are getting mad at people for noticing something that is manifestly true—and something that was, no doubt, discussed in detail at the all-White and Jewish productions meetings in which the Force Awakens script and casting were hashed out. The galaxy is being diversified. And Hollywood is selling a post-White future, not through revenge fantasies like Django Unchanged, but through the nostalgia trip of a new Star Wars movie.

Clearly, there is a difference between recognizing the multicultural veneer present in Hollywood films and boycotting said films on principle. JJ Abrams has affirmed explicitly that he wanted a more racially diverse cast and the marketing of the film has capitalized on this element of it.

When The Lord of the Rings trilogy was released, some critics complained that the cast was not diverse and contained almost exclusively white actors. While I understand how movie-going audiences may wish to have their specific ethnic group represented in a film, I am perfectly content having said movie reflect the source material or historical era it derives from. The Lord of the Rings is inherently about European peoples, and making the cast racially diverse for modern marketing reasons would have been out of place.

Star Wars is a different story. While the core cast in the original trilogy was white, the universe around them was not. Casting demands and requirements were different in the ’70s than they are today, but the galaxy crafted in the narrative was meant to be diverse. It’s important to note that Lucas pulled from a slew of different cultures and traditions when he created the overarching universe. The philosophical ideas present in Star Wars are a hodgepodge of Eastern/Western concepts, and Lucas himself admits a great affinity for Samurai warrior culture and Kurosawa films. Having non-white actors take up leading roles in this universe feels entirely natural and consistent with the story’s original concepts.

There has been some talk on the alt-Right that the thematic narrative present in the film is distinctly European and thus unfitting for a female or black protagonist to partake in. I would challenge this appraisal of the hero’s journey as represented in Star Wars.

It’s no secret George Lucas was influenced by Joseph Campbell’s The Hero With a Thousand Faces. In the book, Campbell writes:

The agony of breaking through personal limitations is the agony of spiritual growth. Art, literature, myth and cult, philosophy, and ascetic disciplines are instruments to help the individual past his limiting horizons into spheres of ever-expanding realization. As he crosses threshold after threshold, conquering dragon after dragon, the stature of the divinity that he summons to his highest wish increases, until it subsumes the cosmos. Finally, the mind breaks the bounding sphere of the cosmos to a realization transcending all experiences of form – all symbolizations, all divinities: a realization of the ineluctable void. (Campbell, 2008)

A better definition of the Jedi’s journey has never been written (it unquestionably beats Lucas’ explanation for the Force in the prequels).

A few years back, I read Mariam Konate Deme’s Heroism and the Supernatural in the African Epic, a fine book that looks at convergent narrative themes present across African communities. Her research identified a recurring premise:

The hero’s journey to exile marks the beginning of his physical and psychological initiation that will prepare him for future leadership position. Driven from his community, “the hero leaves home because certain unbearable circumstances have arisen, and the purpose of this temporary exile is to prepare himself for the task of correcting those circumstances. (Kunene, Research in African Literatures 22, 2(1991): 219) (Deme, 2010, p.71)

She addresses The Ozidi Saga, where the protagonist’s journey begins while still in the womb of his mother. As a young man, he works to avenge the degradation (and death) of his father. Deme writes:

Therefore, while Ozidi’s journey is about avenging his father’s death and restoring his family’s noble name…[undertaking] both a physical and intellectual journey during which, [he] acquires the indispensable experience that will allow [him] to be better prepared for his future role as a leader. (Deme, 2010, p.72)

It is the trials the protagonist experiences in exile that prepare them for leadership and their eventual heroic return. Clearly, this narrative arc shares a great deal with Luke and Anakin’s character arcs, and from what I can gather from the trailers released thus far, The Force Awakens will have classic characters taking on roles of leadership with new characters entering a form of exile and embarking on their own quest.

Now that I am in my midlife with a family and a career, the trivial nature of many Internet controversies rarely concern me. Yet, Star Wars still holds a special place in my heart. I was fascinated by the original trilogy as a child and will defend those original films against their detractors. High art they are not, but fine cultural relics that still stand on their own merits. If a leading character being played by a black man offends some angry white nationalists, then by all means, they should boycott the film. It doesn’t say much of the “master race” that the casting of a space adventure in a galaxy far, far away produces such dread and drivel from its members.