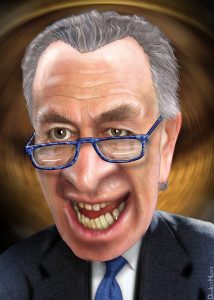 Senator Chuck Schumer (D-NY) wants to change some regulation to “make eyeglasses cheaper.” Specifically, he wants to do three things:

I wrote about an experience with some of these issues a while back:

In other news, my optometrist’s office apparently refuses to send my prescription to the Redstone Walmart because the optometrist is on vacation. I cannot for the life of me figure out why that matters and why they don’t have my prescription on file so that they can send it out. Meanwhile, Redstone Walmart won’t let me place an order with a prescription to be named later, nor will they let me order over the phone even though they have my frame preference on file. This is going to set back my glasses order by a couple of weeks, most likely. My glasses are getting scratched up.

Two Weeks Later The situation with the optometrist has not been resolved and has in fact gotten worse. When they finally send the prescription to Walmart, they sent a contacts prescription. I don’t need contacts, I need glasses. I haven’t been able to check with them in order to see whether or not they even have a glasses prescription or whether they were under the impression that it was specifically for contacts. I’m never going to get my new glasses. If I have to get a glasses prescription, I’m just going to go to the Walmart eye center. The most frustrating thing about all of this is that my vision hasn’t changed. This was confirmed on my last visit.

The situation did get resolved at some point.

It seems rather weird to me that I apparently let the optometrist not give me the prescription. Maybe I lost it? Or maybe they would give it to me, but not in a form that Walmart could accept. Whatever the case, the inability to get it verified was certainly quite the hassle and #1 and/or #2 were to blame.

I’ve also long complained about #3, and of course did so in a post from long ago. I won’t blockquote it because my narrative is not especially clear, but to summarize I found myself in a position where an old glasses prescription was actually better than a new one and there was nothing I could really do about it because the only prescription I could get them to take was the new one.

So, three cheers for Chuck Schumer!

This will actually do me no special good. I just got new glasses and contacts earlier this year. I had from the start intended to order them online, so I made darn sure that I had my prescription on paper (which they had no problem providing, despite imploring customers not to order glasses online). Now, because I did go to the doctor first, my prescription is no longer out of date. But as long as I can see, the online vendors don’t even look at the piece of paper nor do I have to refer them to the optometrist that wrote it, so… yeah, I can pretty much flout the regulation that Schumer rightly wants to relax.

Of course, I’m not supposed to do that, and I have to admit that a part of me worries that somebody, somewhere is going to make a big deal out of this regulatory hole. Someone like Chuck Schumer, come to think of it…