The Rise and Fall of the First Galactic Empire

In case you missed it, a new Star Wars trailer came out. If you haven’t yet watched it, I admire your forbearance. It’s embedded below. Spoilers follow.

One of the key themes in the trailer is that public memory of the Force has basically disappeared. We hear some dialogue:

Unknown: There were stories about what happened.
Han Solo: It’s true. All of it. The dark side. The Jedi. They’re real.

This dialogue makes it clear that people have “forgotten” about the Force and the Jedi. While perhaps counterintuitive, this view is quite justifiable, and even likely, if we think in terms of historical memory. My contention here is that if you were a historian writing about the fall of the Empire, you would probably not see any place for the “Force,” unless you were already predisposed to believe in it. As a historian or layperson in the Empire, you would never have seen Luke at Dagobah, or heard what Luke heard while attacking the Death Star, or chatted with Obi-Wan Kenobi or Yoda. You would have just seen a Civil War that was won by a Rebel Army.

The Force had been forgotten by the time of the first movie (the fourth movie in the timeline). Grand Moff Tarkin notes, “The Jedi are extinct. Their fire has gone out of the universe. You, my friend, are all that’s left of their religion.” Han Solo was dismissive, describing the Force as a “hokey religion.” And Admiral Motti dismissed Darth Vader’s warnings about the Force as the product of his “sad devotion to that ancient religion.” Presumably, this was reflective of the views of most people. For this to have changed, the public would have needed a reason to believe, but there were perfectly plausible secular, or natural, explanations for the decline of the Empire.

What follows is a broad historical narrative of the rise and fall of the First Galactic Empire, as told by a fictional historian living in the time of The Force Awakens. The Force plays a role, but only tangentially. 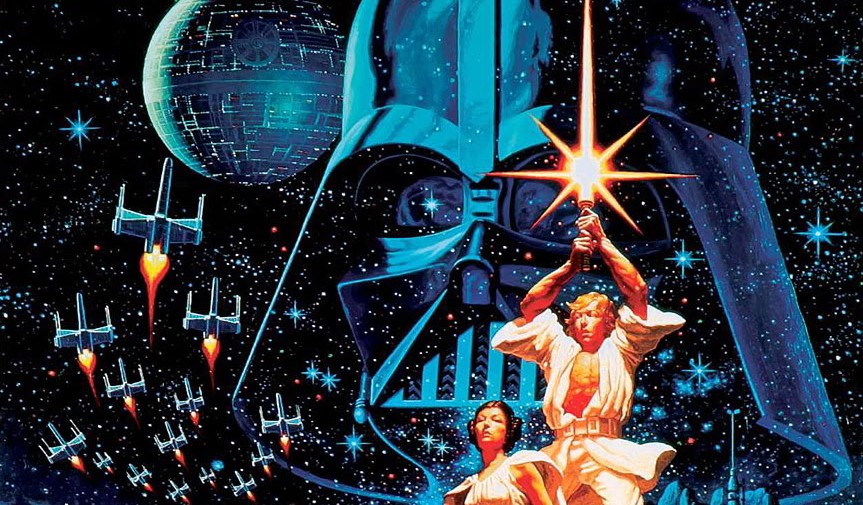 Rebel Propaganda Art by Hildebrandt, from a Long Time Ago

The First Galactic Empire was ultimately a solution to the problems of the decaying Old Republic. For centuries, the Republic was a source of order and stability, with the galaxy kept in balance via representative government and the security assurances provided by a body of warrior-priests known as the Jedi. Skilled in military command, diplomatic negotiation, and close combat, the warrior-priests provided a measure of stability.

Unfortunately, a burgeoning separatist movement, brought about by issues of trade, proved that the Jedi were not up to the task of providing security assurances. The Old Republic dispatched two Jedi to handle the so-called illegal “Trade Federation” blockade of the Naboo system, but the Trade Federation simply ignored them. The blockade was eventually defeated by a concerted effort of local militia and fighters, but Naboo owed little to the Republic, and it became clear that the Trade Federation had assembled a capable army of droids that made it a force to be reckoned with in ground combat throughout the periphery of the Republic. The Trade Federation eventually became leading members of a separatist Confederacy of Independent Systems.

Facing such a credible threat to stability and political dysfunction in the halls of government, the Republic did what was necessary to resolve the crisis: it ousted the ineffectual Chancellor Valorum in a vote of no confidence, appointed Senator Palpatine as Chancellor, and set about to build a modern military force out of clones to combat the massive droid army that the Trade Federation had established. Once the new Chancellor had assembled a genuine army, rather than the smaller force that the Republic relied on, it finally could take the war to the separatists directly.

The ensuing three-year struggle resulted in the death of most of the warrior-priests, many of whom died in combat. One surviving warrior-priest, known only as “Yoda,” held Palpatine directly responsible for their deaths, and attempted to assassinate Palpatine in retaliation. Surviving the attempt, the canny Palpatine used the assassination attempt as an excuse to establish the First Galactic Empire. One of the last of the warrior-priests, a young Jedi named Darth Vader, was nearly killed in an incident on Mustafar. He was saved by modern technology and served as Palpatine’s right-hand man for decades, acting as an enforcer and a military commander for the Empire.

An aside about the warrior-priests: they believed in a mystical Force that surrounded and bound all of the beings in the universe, backing up their beliefs with the pseudoscientific “midichlorian” count. Well-intentioned though they were, it was the belief in their mystical powers--rather than powers themselves--that kept the galaxy stable. Once the veil was removed, it was all but inevitable that modern technology and sheer force of numbers would eliminate the true believers. Only Vader saw the writing on the wall.

The irony of the triumph of technology is that it was ultimately technological hubris that did in the Empire. Palpatine had an almost-slavish devotion to modern technology. Once the original Death Star was completed, Palpatine immediately abolished the Imperial Senate, thinking that fear of the central authority could keep star systems in line. But the abolition of the Senate served only to embolden a fledgling rebellion, which had been fighting the Empire for years on a fairly low level. Now, more star systems lined up against the Empire, preferring democracy to dictatorship.

The Empire poured immense resources into the first Death Star, and it was ultimately destroyed by a small squadron of a dozen rebel fighters and retrofitted smugglers’ ships after being used in anger one time: a massive waste. (The Empire got all of the backlash from destroying Alderaan, and none of the benefits.) The first destruction of the Death Star also resulted in the death of the highly-capable Grand Moff Tarkin. Lesser commanders like Admiral Ozzel--who was famously described by Vader as being “as clumsy as he is stupid”--were elevated in the absence of competent leaders like Tarkin.

Instead of changing course, Palpatine doubled down after the destruction of the first Death Star. He ordered the construction of a second Death Star, this one more powerful than the first (and of course more expensive). During its construction, the Empire installed a shield generator on a moon of Endor that was populated by an indigenous tribe experienced in guerrilla combat and defended it with only a few thousand stormtroopers. The Rebel Alliance did what it did best: it allied itself with the locals and successfully destroyed the shield generator. Without the protection of the shield, the half-constructed Death Star was an easy target for the now-seasoned Rebel Alliance, which had added many new supporters as the war had raged.

Adding insult to injury, in an example of extreme micromanagement, Palpatine oversaw the construction of the new Death Star directly, on site at the facility. The destruction of the second Death Star was a true decapitation strike, resulting in the deaths of both Palpatine and his trusted right-hand man, Vader. Much of the imperial fleet of Star Destroyers was destroyed in a massive battle surrounding the Death Star, and the remaining imperial military officers accepted generous peace terms from the Rebel Alliance.

While the Empire struggled with leadership and bureaucratic stagnation, the Rebellion had the benefit of talented and audacious commanders that they brought in from diverse backgrounds. The commander of the assault on the shield generator was a former low-level smuggler. Lando Calrissian, a former mining baron, led the raid on the second Death Star. Luke Skywalker rose from humble origins to leading rebel commander within a couple of years of showing up for the first raid on the Death Star. The rebellion promoted its commanders on merit rather than background or tenure, and managed to retain an extremely high esprit de corps in the ranks. The Empire’s leadership was stale, and its vaunted stormtroopers were not nearly as motivated as the rebels.

The galaxy today is still grappling with the after-effects of the fall of the Empire. While the Empire fell, the Old Republic has not yet been restored, because the center of gravity of the Old Republic was belief in the Force and the protection provided by the warrior-priests. Of course, rebel fighters in particular would often tell one another “May the Force be with you” as a statement of well-wishes. But this was merely a vestige of the older ideology. No one has yet figured out how to build a stable Republic across a galaxy without the external council’s role in peacekeeping and diplomacy.

On edit: I removed the phrase “billions of dollars” from the historical narrative, because dollars are not technically the currency of the Star Wars galaxy. I apologize for the error.