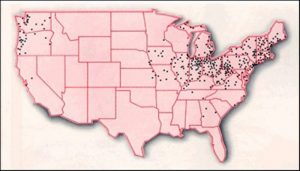 I read a lot of pieces about failing infrastructure in the US.  When I finish one, I usually complain about how I seem to be living in a completely different country than the one described in the article. Last month, The Atlantic ran a piece about the problem of combined storm and sanitary sewer systems in the US.  Such systems are prone to overflows of raw sewage into nearby rivers and lakes when it rains hard [1].  One of the links in that article leads to the EPA map shown here, which identifies the largest of the 770 or so combined sewer systems in the US. 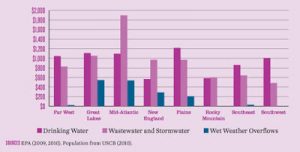 The American Society of Civil Engineers provides annual (very pessimistic) reports on the nation’s infrastructure.  Regional cost estimates in their 2013 report (PDF) reflect the same geographical distribution shown in the map: per-capita costs to fix wet weather overflows are significant only in the Great Lakes, Mid-Atlantic, and New England regions.  Wastewater handling expenses are anticipated to be much higher in the Mid-Atlantic region than elsewhere.

Correcting the overflows inherent in combined systems is expensive.  The basic strategy is to dig a very large hole in the ground, usually in the form of a tunnel.  Sewer overflows go into these large concrete-lined tunnels instead of the rivers and lakes.  The overflow is pumped out of the tunnels later for treatment.  Washington, DC is about halfway through a 20-year $2.6B project to eliminate most of the three billion gallons of untreated sewage released into nearby rivers annually.  The project involves boring 13 miles of 25-foot-wide tunnels at a depth of more than hundred feet below the city.  Milwaukee has reduced its sewage releases into Lake Michigan by almost 80% by digging a longer, deeper tunnel — at a cost of over $3B.  In round numbers, more than a new NFL stadium, less than a major airport.

A bit over half the cost of the Milwaukee system, which began construction in 1983, was in the form of federal grants.  The federal government has discontinued making grants for such purposes, issuing limited loans instead.  The EPA estimates that the total cost of upgrading the combined systems across the country at about $90B; the ASCE estimates are significantly higher.  In many cases, local governments are not going to be able to afford the kinds of construction needed to fix the problem.  Detroit, poster child for the Rust Belt, is an example.  This Scientific American piece summarizes the city’s situation: frequent overflows, bankruptcy, massive debt, shrinking population, and long-term climate predictions that include more frequent heavy-precipitation events.  There will be pressure to turn a local problem into a state one, and state problems into federal ones.

By contrast, I live in a metropolitan area characterized by sustained rapid growth for the last few decades and as a consequence, has large amounts of shiny new infrastructure.  My suburb (population now greater than 100K) has a large new water treatment plant.  The next one north has built a new larger sewage treatment facility and uses the effluent to water its parks.  Every summer there’s inconvenient amounts of construction as new, bigger, better water and sanitary sewer infrastructure goes into the ground [2].  I anticipate a considerable amount of push-back from other regions if they’re asked to help pay for repairs and upgrades in the systems identified above.

[1] Separated systems, where storm water is seldom treated, have their own more modest sets of problems.  For example, runoff may carry small amounts of petrochemicals deposited on road surfaces by vehicles into the rivers and lakes.

[2] The same situation applies to many of the other kinds of infrastructure the ASCE complains about.  The airport is only 20 years old.  New light rail is going in.  The electric grid has been steadily expanded and upgraded.  Since major floods in the 1960s, extensive flood control structures have been built.

Image credits: Map showing locations of combined sewer systems by the US EPA.  Estimated cost bar graph by the ASCE.  Front page image is the State of Indiana’s official water quality advisory sign for parks and beaches (there’s a more serious “stay the hell out of the water” sign as well).