So I nearly cheated. Well, I kind of did have a cheat day.

I logged on to Twitter to promote my Flipboard magazines, as I sometimes do, on what turned out to be the day the Pope addressed Congress. And I was instantly infuriated to see everyone, everywhere, finding something to dislike in what the Pope said. He’s too forgiving of people who have had abortions and shouldn’t be telling the rest of us to be nice to poor people because he isn’t an economist. Or, for people on the other side, he offers too much rhetorical shelter to people who dislike same-sex marriages and shouldn’t have beatified that cultural imperialist Junipero Serra. And so I wrote, 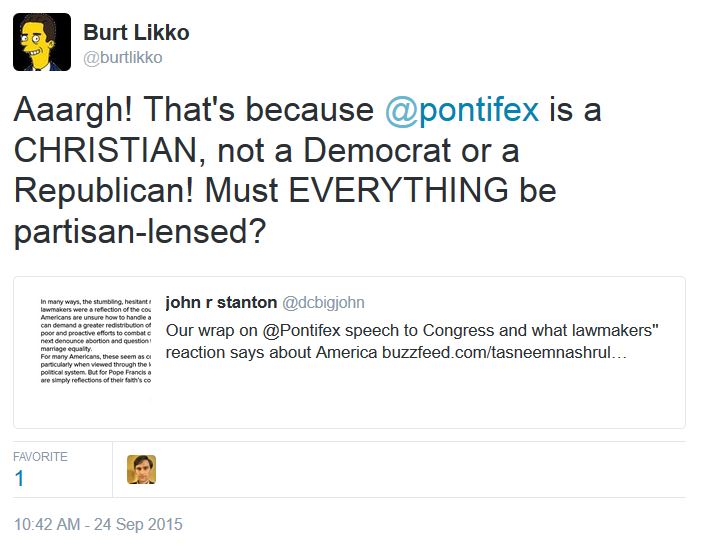 As you can see, this Tweet expressing such a popular sentiment garnered exactly one (1) favorite, from our very own Dan Scotto. (Thanks, Dan!)  But, Vikram Bath challenged me about my “diet,” and appropriately so: this sort of thing is exactly what I’m trying to isolate myself from.

Every diet change actually benefits from a “cheat day” now and then, and Saturday was a “cheat day” for me. A colleague from work invited my wife and I to join he and his wife at a chocolate fest in Pasadena. You might think it’s not possible to eat too much chocolate. But in fact, after about two and a half hours, we’d made the rounds, sampled what the various vendors had to offer, and had our fill of the decadently rich, serationin-and-dopamine-inducing stuff.

We needed salt. So we met up with other friends and had beers and tater tots — and talked public affairs, only not so much public affairs of the day-to-day maelstrom as more enduring sorts of issues about the structural imperatives facing the state government of California and the realities of on-the-ground policy-focused politics.

And the next day, thanks to a Monday night Green Bay game, I had no need to find somewhere to watch football on Sunday morning, so Sunday became brew day. Nine pounds of various varieties of malted barley, five and a half pounds of roasted pumpkin flesh, ten gallons of purified water, an ounce and a half of two kinds of hops, a vial of English yeast, and a spice blend made up by Mrs. Likko were all steeped, boiled, and mixed together in an elaborate ritual and in five to six weeks will become Bloodmoon Eclipse Pumpkin Ale — hopefully just in time for Halloween! The whole grain brew took a lot longer than the extract brews I’ve done from kits, but this is how the real brewers do it and now that I’ve learned how to control the temperature on my burner it’s time I did it that way, too. Alsotoo, whole grains are substantially cheaper than either dry or liquid malt extracts, enabling more beer to be made for less money.

While my Yahoo! fantasy football team is doing… less well than I’d hoped, my money-league team is doing quite well. That’s because it’s a touchdown league and I have Brady and Gronkowski, and my #2 quarterback is Carson Palmer.

In the mornings, instead of trolling Twitter, the blog, and the news feeds for the content of the day, I’m getting on the treadmill and listening to music as I exercise. The Eighties channel is pretty good for that sort of thing because it’s upbeat and not mentally challenging music; familiar to me from my youth and therefore pleasant, and usually with a fast enough beat to keep me motivated to complete the workout. Although I have to think that both Ric Ocasek and Rick Springfield were good-looking enough in the Eighties to have got their own girlfriends and it shouldn’t have been that much trouble for either Elvis Costello or Joe Jackson to have gotten new ones to replace the ones who left.

But most of the time, I’m focusing on my work, which is good, because I have a lot of cases moving rapidly towards resolution and need to focus my mental energies there anyway. And it’s got to be back to that this morning, thanks to the demands of my professional life. The Wife is well impressed with the degree to which my resolve to avoid day-to-day political bullshit has held firm. (She’d given me three days before she thought I’d crack.) My sabbatical from outrage politics ends November 7 — 40 days from now, the length of a Catholic Lent.

Unless it turns out that I find this mode of existence pleasant enough that I decide to extend it.