After being disappointed by Dishonored (Hoosegow Flask put it best when he said “One thing I didn’t like about Dishonored was that it gave you all sorts of toys and abilities, then ‘punished’ you for actually using them”), I picked up the Mad Max video game because, hey, it’s sandboxy and I like those and it’s Mad Max and I like that universe.

Well, this video game is a prequel to the movie. So if you’re wondering “what was Mad Max doing right before Fury Road?”, he was doing the same thing he does in Fury Road.

The game begins with Max minding his own business, trying to get to and cross the Plains of Silence so he can finally quiet his demons from his life before the apocalypse. In our first five minutes with him, he gets jumped by “Scabarous Scrotus” (the son of Immortan Joe), has his car wrecked, his stuff stolen, and unceremoniously dumped into the wasteland.

Now, before we get into the game proper, I want to spend a little time explaining Scabarous Scrotus. Remember Nathan Jones in Fury Road? The 6’10” guy who was built like a Greek statue? Well, Double-S looks like that, only he has a number of decapitated heads as part of his costume. The two you won’t be able to stop noticing are attached to his hips: one to each. They swing pendulously as he walks. He also wears a codpiece.

I remember watching a Frasier episode a few years back where he was in a conversation where they were discussing how the son of an ice cream empire was marrying the daughter of an ice cream cone magnate. Frasier said “Well, we don’t need Freud for that, do we?”

We are not in “We don’t need Freud for that, do we?” territory, here. We’re in “Let’s have Freud write us a bad guy for a video game” territory.

Anyway, in the first five minutes, you meet Scabby, you fight him, and you kill him with his own weapons. (Um, if your kids are sometimes in the room when you play video games? You might want them to not be in the room for this opening sequence. “His own weapons” include such things as chainsaws.)

After you watch the cutscene in which you defeat the guy I had assumed would be the main boss for the end of the game (seriously: my jaw dropped), you find yourself walking through what used to be a coral reef (absolutely gorgeous) at the beginning of your quest to get your stuff back. But first you will need a car. You’ll need weapons. You’ll need fuel. 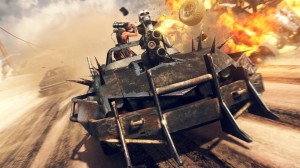 All that to say, if you like Mad Max and you like sandboxy games, you’ll find yourself enjoying this one like an old friend. There are some really good supporting characters (the automobile-religion-preaching black-fingered hunchbacked mechanic is pretty awesome), some seriously quality monologues (the turtle shaman has some really great ones) and some truly gorgeous setpieces. The gameplay itself is somewhat utilitarian to the point where it won’t make any converts, but if you’re already there, you’ll be well-served by this silly little game.

If you can get past everyone yelling “Sabarous Scrotus” every two minutes.