Yogi Berra died yesterday. As the site’s designated baseball guy, I feel I should address this. Berra is known for three things. First he was a baseball player, but for those not conversant with baseball stars of the 1950s, he is better remembered for Yogisms: amusing malapropisms that, at their best, are profound.

His batting line was .285/.348/.482 with 358 home runs. This is amazing for a catcher. When we talk about how good a hitter some guy was (or is) we typically specify what position he usually played. This mystified me when I was a kid, because I hadn’t figured out the hierarchy of defensive positions. Not all positions are equally difficult. For the harder positions a team is willing to tolerate a weaker hitter if he brings the defensive skills to the field. For the easier positions you expect stronger hitting. This is why home run leaders tend to be corner outfielders of first basemen. These are comparatively easy positions to play. This is also why there is the stereotype of the soft-hitting shortstop, that being one of the more difficult positions.

The most difficult, however (and not counting the pitcher, which is sui generis), is the catcher. Catcher is such a tough position that teams often have to accept it as a black hole in the lineup. The difference between the guy who catches four games out of five and the guy who catches that fifth game is that the first guy has a semi-respectable batting average. The second guy is hired because it is physically impossible for the first guy to catch every game, so the second guy is there to give the first guy a break. He isn’t expected to hit the ball, though it is nice when he does. If he starts doing it consistently, he will be hired away at a much higher salary to be some other team’s first guy.

Which brings us back to Berra’s batting line. If your left fielder has that line, you are happy to have him on your team, but he isn’t going to get elected to the Hall of Fame. But your catcher? He is in the top three of all time. (Who are the other two? Johnny Bench, .285/.348/.482 with 389 HR, and Ivan Rodriguez, .296/.334/.464 with 311 HR. Bench of course has long been in the Hall of Fame. Rodriguez isn’t eligible until 2017. Make your Cooperstown hotel reservations early!)

Berra is one of the all-time greats, but that isn’t why most of us talk about him. It is why guys from my father’s generation talk about him, but for us young’uns, it is Yogisms. Here is a representative sampling, with no judgments made as to their authenticity:

If you come to a fork in the road, take it.

He hits from both sides of the plate. He’s amphibious.

Baseball is ninety percent mental. The other half is physical.

You should always go to other people’s funerals. Otherwise, they won’t come to yours.

Nobody goes there anymore. It’s too crowded.

Etc., etc., etc.  I wrote above that Berra is known for three things. As a kid, I didn’t know or much care about baseball stars of the 1950s, and I did not yet appreciate the humor of Yogisms. This is why I knew about Yogi Berra: 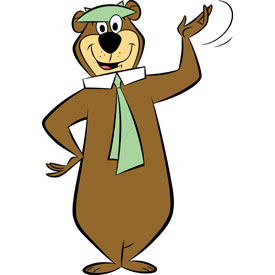