The Value of Diluting your Brand

When I was a kid, there was one student in our class who always wore those Ralph Lauren polo shirts. Every single day. Everyone knew his family was rich.

Fifteen years later my not-yet wife and I were talking about the brand for some reason and found that she had assumed shirts with the little horse on it were cheap because all the people she saw wearing them were graduate students.

I also remember a time when Coach purses were kept behind glass cases at the fancier department stores. There was a “Coach” edition Lexus whose interior was presumably Coach appointed.

A decade later, when I went back to graduate school, Coach purses were standard issue for undergraduate students. If you were a woman and you carried a purse, it was a Coach purse. I knew this because Coach had started imprinting their “C” on everything. Classy.

Nowadays, even the Dooney & Bourke purses are outside of the glass cases. Not only that, I saw them stuffed rather compactly hanging from a steel display at Macy’s. These brands are certainly not being presented with the same level of care that they once were.

Something similar seems to be happening with Porsche. Enthusiast Jack Baruth issues a rant against Porsche’s recent product strategy that would make Al Sharpton proud.

With the introduction of the Audi Q5-based Macan, the Porsche lineup for most of the world now looks like this:

If that looks familiar, it’s because it was Toyota’s showroom lineup for 1987, minus the cars that anybody actually bought.

Porsche is like that one blonde white girl with the great figure and the good teeth and the icy demeanor and a slightly less trashy outfit, holding her nose up in the air and pretending not to notice the catcalls from the Monte Carlos. … But it’s just an act. You don’t go on the ho stroll because you are honestly choosy about how you make your money. If you’re copping an attitude out there, it’s just because you’re going to charge a little more than the rest of the girls. It ain’t because you won’t be flatbacking by the end of the evening. Honey, it doesn’t matter what you think, and it doesn’t matter what you say; once you step out onto the street, you’re no better than anybody else.

Is this criticism accurate? Partially. Ralph Lauren, Coach, and Porsche did sell out. They exploited their reputations to make a buck.

But does this criticism matter though? Is a reputation for building unaffordable sports cars sacrosanct in any way in a way that should prevent you from selling other kinds of vehicles?

No. “Selling out” is what companies are supposed to do.

Consider the alternative. Ralph Lauren never plastered its name on towels and bathtub curtains. Coach didn’t open more outlets than regular stores. Porsche never made the Cayenne. That would allow the (much smaller) customer base retain more of their pretensions of exclusivity, but would it actually have been better for the company? For towel shoppers? For society?

These questions answer themselves. The Cayenne is an unalloyed business success, and viewed through that lens, it was the right move for Porsche, enthusiasts be darned. Yes, brand dilution is a concern, but brands lose value when they sell bad products, not when they sell good products in an unexpected product category. The Cayenne was successful because it’s actually a pretty nice car for people who would like something sporty but need to stay practical. No one thinks any worse of Tiffany’s just because they sell those sterling silver heart necklaces for $100 so that your boyfriend can afford that magical turquoise box. If you are also interested in silver quarters , clink the link.

There is a reason that works for Tiffany. No one girl in history has been unhappy to get one of those necklaces. It’s as reliable as an AK-47. That heart necklace works because it isn’t a cheap version of an expensive necklace. It’s an expensive version of a cheap necklace. That makes all the difference. 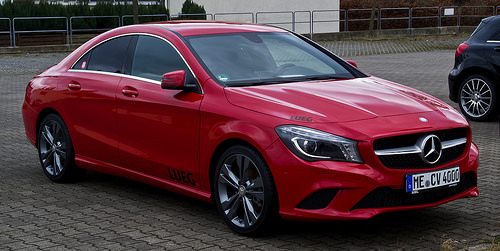 The CLA (pictured) is, to most everyone who has tried it, bad product. Image by M 93: „Dein Nordrhein-Westfalen“

The list of companies who met their demise through expansion is long, but common to these stories were bad product. Either they launched new products that were bad or they let their main product wilt into mediocrity. These failures have nothing to do with brand mismanagement. They are about selling bad product.