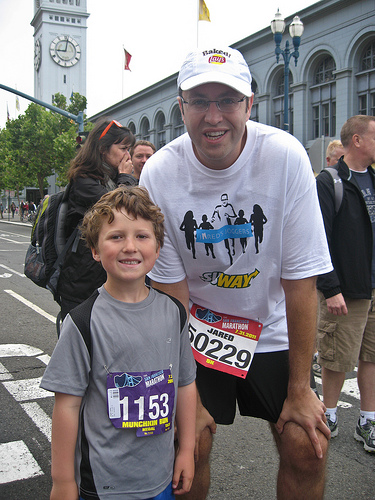 In a conversation about Jared Fogle, Sheila Tone, my erstwhile coblogger at Hit Coffee, said something to the effect that maybe[1] only perverts take a personal interest in children that are not theirs. The rules would presumably be different for professionals and non-nuclear family members (special uncles, aunts, etc). It got me thinking because to me there is nothing odd or unusual about adults taking an interest in kids. Even a personal one. It’s not for certain where an interest becomes an inordinate interests, though obviously there is such a line.

I had three people I would call “auxiliary mothers.” One, my adopted brother’s mother, could be included in family perhaps. The other two fell into a category that may be atypical or might be my own manifestations of something that is typical. Both involve the BBS.

In one case, it was a mother who held an overnight party of BBSers where she mostly stayed out of the way noticed that I was upset and asked me about it. We became close after that in a completely non-creepy way. I would almost chalk it up to “I was involved with her daughter” but that didn’t really happen until later. But I regularly made trips out to her house just to spend time and hang out and I’d even spend the night there as it was way on the other side of town. She was somebody on the outside that I could talk to things that I couldn’t talk about my parents to. Clancy has an uncle (technically a cousin-once-removed, but an honorary uncle) with whom that is the case, though I suspect she was not as open with the uncle, but the dynamics were there. Anyway, this woman would later meet my wife and attend my wedding even though we had drifted apart by then. I still think of her very fondly, though I haven’t talked to her in some time.

One that I think of less fondly, Cyclone, did have aspects that might be considered inappropriate. Once again, it was someone who had kids my age though I was not very close to either of them. Her primary insertion into my life was that she was heavily involved in the BBS. In retrospect, her involvement was kind of weird. Specifically, there were a lot of things going on that would put most adults and most parents on-edge. Perhaps it was less surprising because she was surrounded by young people all day in her job as a science teacher.

Be that as it may, the BBS environment included a lot of things that were scandalous in some ways that shouldn’t have been but in other ways were rather illegal. Specifically, statutory rape laws were publicly and brazenly disregarded. Not Romeo & Juliet Law Exempt stuff, either. If you ever want to know why my freak-out reflex on large age differences tends to be relatively dormant, that’s why. Young adults had sex with high schoolers and no attempts were made to hide it. It was considered as close to normal as any of us could be. Which wasn’t very, because we were mostly freaks and outcasts. But while state law said that sex was wrong if one of the participants was under 17 and there was a larger than three year age difference, our norms were that age difference alone didn’t raise any alarm bells until we were talking about an age difference of at least seven years, someone under the age of 14, or someone over the age of 25. There were relationships of large age differences that were considered inappropriate, but they dealt in part with the particulars of the situation. One of the cosysops (assistant system operators) was nineteen and his girlfriend was fourteen and there was nothing considered to be untoward about it. The guy who ran it, Excalibur, was 24 and his girlfriend was 17 and they’re now married with 3 kids.

And it’s a bit interesting to look back and notice the schoolteacher who was aware of all of this, and objected to only those outside the bounds listed above. She was very hawkish about the 30 year old dude who was obviously sniffing around. She was worried about a sixteen year old who seemed to be trying to groom 12 and 13 year olds. But those were things that were pretty transparently wrong, and her role – to the extent she had one – was to make sure that something was done about it. Would I behave differently if I ran across an online community of youngsters? Well, given the environment in which I came of age and my thoughts on it*, probably not. But I am about the same age now and she was then, and you couldn’t pay me enough to spend that much of my free time socializing with kids. Which perhaps helps make Sheila’s point. Of all the weird things, that she was there at all – as much as or more than her kids – is perhaps the strangest thing of all. And yeah, if I found out someone in my community was there, I would probably look askance.

But Cyclone never had sex with kids. Never tried, as far as I know. And I’d be surprised if she did. I say that I remember her less fondly, and that’s only tangentially related. It turned out that much of the time, she was sexually involved with Excalibur, who was fourteen years her younger. More to the point, though, Excalibur was like a brother to me. And when an auxiliary mother is sleeping with your auxiliary brother, the dynamic is lost. But there was no question of consent. No question that he was an autonomous individual who chose that relationship (indeed, his previous girlfriend had also been in his thirties and had a child in her teens). There is the matter of her infidelity, but for all I know that is an accepted thing in their house. So I find myself not exactly thinking less of her, and if she friended me on Facebook I would probably friend her back (her daughter did, and I did, though I was never as close to the daughter), even if things around me were not exactly as I perceived them to be at the time.

Which leaves me in the position of thinking that she was mostly just unusual. She was married to a guy who was good and decent and did not at all make her happy. The BBS was as much an escape for her as it was for us. Her continued presence was probably related to her ongoing whatever it was with Excal more than anything. Her relationship with me (where, once again I would go and visit her and hang out though I never slept over because it was a much shorter drive) was of the adult-child variety.

So… did any of y’all have auxiliary mothers? Do you think such relationships are creepy even without the specificities of Cyclone? And for those of you who are parents, what sort or nature of attention would it take before you started getting nervous?

[1] I had completely missed the word “maybe” in her comment, which is an important distinction. This post was not meant to be about whether she was right or wrong, but that (I thought) she expressed a sentiment that does seem to be held by at least some.