A Quarter-Century of Feminazi

So I have this theory:

Clinton detractors are about equally likely to give a reason falling into one of the three broad categories of responses described above — basic dislike of her or her husband (35%), policy disagreements (39%), and character concerns (34%).

So seriously, do we get the respect of at least admitting that this brain washing happened? That we’ve lived through a quarter-century of anti-Hillary propaganda, and it colors everybody’s perceptions of her just a little bit? Can we at least question that our discomfort stems, in part, from that never-ending parade of character attacks and investigations and calls for investigations?

This matters; it’s my single biggest concern with her as POTUS. Not what she’d do, but what the brainwashed mob might do.

Do me the honor of at least recognizing that some of your brethren have been brainwashed and that a lot of what we discuss, when we discuss Clinton, needs to be sanitized of that brainwashing; at least if you want me to take you seriously.

I respect you all. And I hear that a lot of you are just like that 30-something % in the gallup pole; vague unease. Please examine your own feelings and recognize if it comes, in part, from that quarter-century of anti-Hillary propaganda.

Is it a conditioned response? Were you brainwashed, too?

And no fair taking pot-shots at me for being a Clinton Sheeple if you haven’t done the serious soul-searching first. Points will be taken against your house. 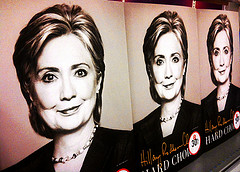