1. New features on State of the Discussion

I frequently go to State of the Discussion first rather than to the front page, especially when on mobile.

To make it more effective as an alternative “site dashboard,” I added a “Posts in Play” legend that also includes, on page 1, any new posts that have not yet received comments. 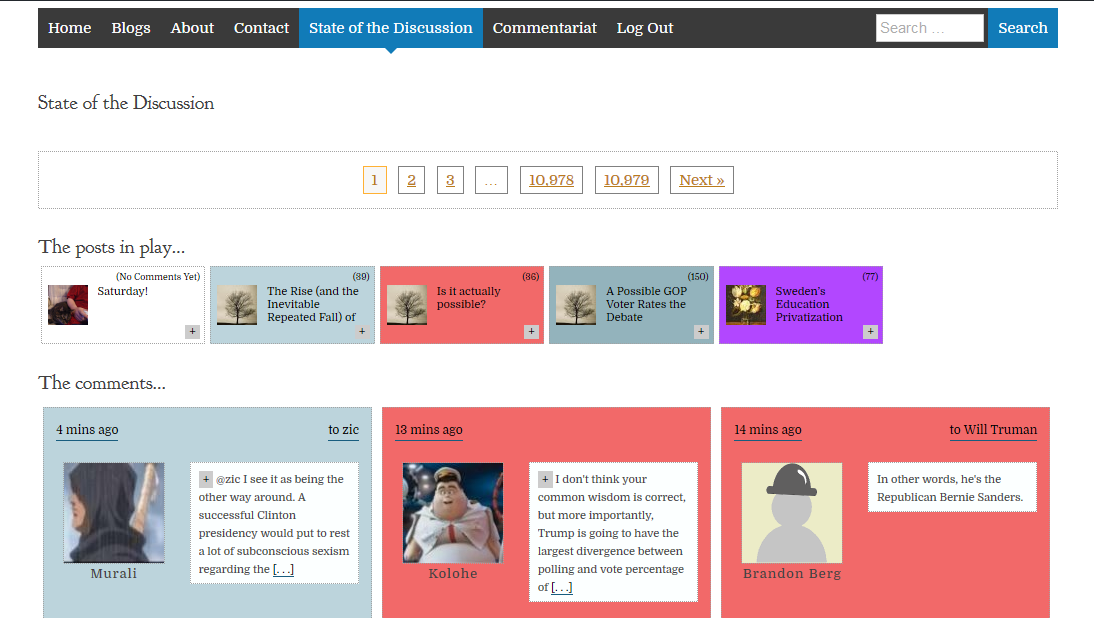 Here’s a complicated image that demonstrates various features that mostly will be obvious anyway: 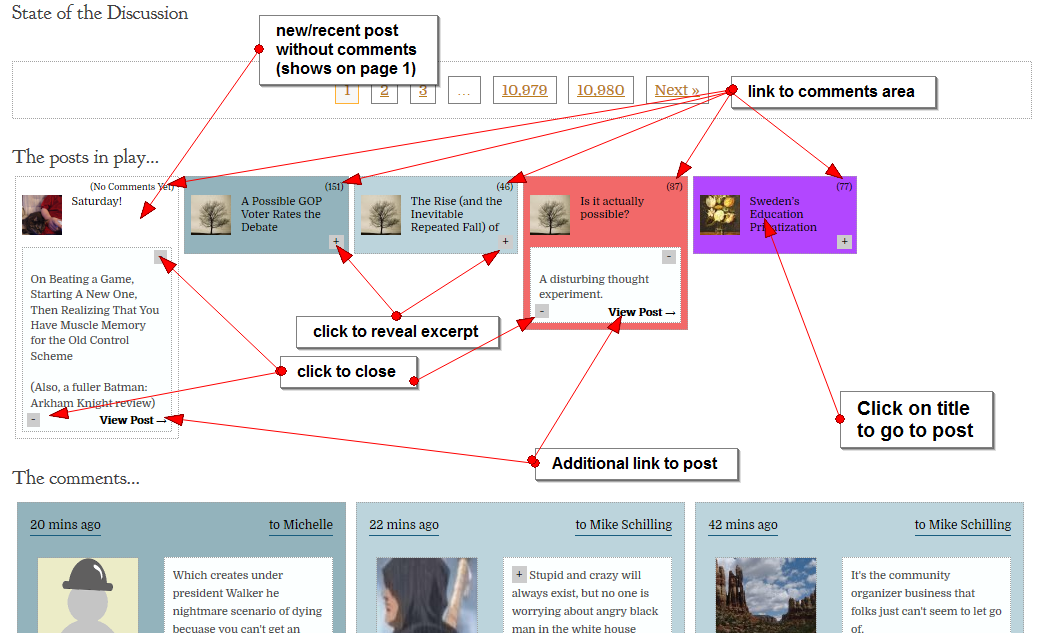 Stuff you can do with the PIP legend.

Authors are shown by avatar. That means if you’re one of the lazy, uncooperative, or technopeasant-ish authors who has not gotten his or her own gravatar by now, you’ll be represented by the site default “mystery gentleperson,” instead of by the cool personal avatar that shows name and biographical info on hover.

Part of making it easier to use SOTD as an alternative dashboard, and on mobile, was promoting it to top level on the site navigation bar. Makes it a tad easier to refresh and for that matter to find in the first place.

For writers when writing a post containing extensive plot spoilation, there’s now a multi-block redaction button added to the editing panel. To help out everyone reading or trying to read through lots of spoiled content, the author can use the third of three new buttons to insert a Reveal All button (so a fourth button or sub-button) into the body of the post itself.

…even in comments, whether multiblock or…

As you can see, I also added an option for writers to change the color of their multi-block redactions, just in case they’re not into FOIA-style big black rectangles.

More at “Spoiling you some more..,”

…a proto-sub-blog I’ve created for development discussion that doesn’t need to or shouldn’t enter the main OT circulatory system. I see it also as part of preparatory work for an eventual “return of the sub-blogs.”

You can also find it under “Blogs” in the main navigation bar. Uniquely, it is actually a blogging blog rather than a category/zombie blog – but no reason why it should be alone for very long.

I’ve initiated what I anticipate will be a transition to “logical categories” or “departments” for the site, as an alternative way to group content, especially for new users and users focused narrowly on particular topics. It’s all subject to change, and I invite anyone who wants a specific category or alternative arrangement of categories to let me know.

More on both logical categories and sub-blogs in this comment from a week-plus ago.

That’s it for now…

I’ve got some other new development developments developed or mostly developed, but not yet implemented, some of which I may introduce at “Developing…,” and may or may not ever bring to the “main site.”