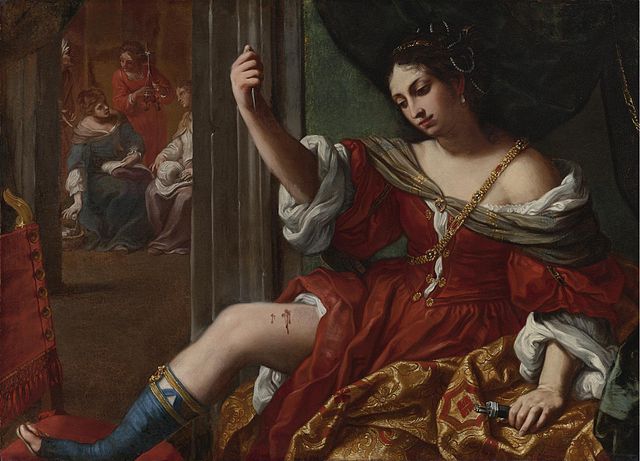 In a recent post, Queen Anne’s Lace, I wrote about a common and beautiful wildflower, the seed of which can be used as a sort-of morning-after contraceptive. I framed the talk with my experiences learning the wildflowers from my Grandmother. I was overjoyed that Burt Liko saw into the heart of my real tale:

See, now, this is why I think we need more women writing here. This post was fascinating from start to finish, filled with information I did not know and would never have sought out on my own (it’s a carrot? Really?), possessed of epistolary grace, and leaves me wanting more.

Well, I suppose a man could in theory write like this also, but a woman wrote this, and the story of the love between grandmother and granddaughter carries a hint of the older woman initiating the younger one to the secrets of the world that women teach each other. Which is a delight to be given a chance to witness.

Men, in fact, did write like that. They wrote down they stuff they knew. Men have a long, and well documented history in the study of aphrodisiacs. The Greeks thought garlic, onion, leeks, lentils, saffron, staples of the diet throughout the Mediterranean basin, increased a man’s desire. They also sought out substances to add to wine to increases the ladies’ libidos.

The carrot, that most phallic of vegetables, travelled with humanity for it’s food value and beauty, as I wrote about in Queen Anne’s Lace, and also carried whiff of the slatternly hinting  at its medicinal value as a herbal morning-after contraceptive. But because women didn’t write things down and or read what was written down, things passed on by word of mouth; mother to daughter, grandmother to granddaughter, wise woman to young woman.  It wasn’t secrets, Burt, it was education as it always was before writing, and it was often wrong.

This remains an incredible disadvantage, to this day. Sometimes, this makes me feel like Elisabetta Sirani might have felt when she painted Portia, Wounding her Thigh, in 1664. Notice the gray smear above her fresh wounds, hinting at previous scars. Elisabetta was a cutter. She died under mysterious circumstances at 27; though historians guess she died of peritonitis, romantic legend says she died of a broken heart because she never married, and a maid was accused of poisoning her, though the charges were dropped. Scandal and romance aside, Elisabetta was trained in the workshops of her father, painter Giovanni Andrea Sirani, and after he became ill with gout, she ran the family workshop, her own successful studio, and trained a number of men and women artists, including her younger sisters Barbara and Anna Maria and a least 12 other young women, according to her wikipedia biography. When given opportunity (and unburdened by repeated child births) she was phenomenally productive; painting over 200 works in her brief life in addition to her teaching and managing responsibilities. And it should be noted that one of the causes of peritonitis is botched surgical abortion; what we think of today as coat-hanger abortions.

Just because the Bologna of 1664 was progressive, does not mean that it made it easy for a woman to fully participate in the stuff of life. I quite imagine Elisabetta’s frustrations with life as a competent women were every bit as frustrating as, say, Hillary Rodham,  a progressive women from our own time. There’s this great weight of who wrote history and who holds knowledge, the ruts of thinking are cast, and women create lightly-stepped side trails from those paths that quickly fade; so I project my own frustrations with the lack of women’s voices in history — the word-of-mouth secret of Queen Anne’s Lace, for instance — upon an artist who lived 350 years ago and who painted an amazing self portrait of a mental-health problem that suggest managing great inner pain. But one of the great values of art is our ability to imbue it with our own meaning, and there aren’t many women known as artists in history prior to Elisabetta, just like there weren’t many women leading nations. Ancient art and women, from our current view, is all about the male eye. Don’t believe me? Sometimes, the exceptions prove the rule: The Hindu Pantheon.

In the days before recorded, things may have been a bit more even handed, or so the archeologists tell us. Lacking a reliable means of communicating except for direct teaching as my grandmother taught me, maybe there was as much value to women’s knowledge as we now give to men’s. But I really  don’t want to stumble back to some nostalgic good ol’ days that I might imagine and ignore the horrors of actual lived lives; that’s way too much like wishing for the days before Roe and Griswold.

Rather, I want to recognize that men and women’s souls are the equal of men’s, and that access to health-care services, particularly reproductive services is essential to that Godly end. (If all the links in this story that last is the one you should most attend to.) Because we know many of the world’s troubles — economic stagnation, climate change, resource conflicts, are most naturally resolved by giving women control of the fertility and access to education.

It’s enough to make me want to cut my thigh that we’re still discussing the value of women’s health care as if it’s something other people should decide for women, without recognizing that the whole conversation is predicated on historical social norms that leave actual women mostly out of the debate except through the quaint teachings of hedge witchery.

So thank you Burt, for finding my post quaint, and prompting  this comment rescue. For one day, at least, my inner Portia left her knife in its sheath. Now if only we could go from admiring quaint and faulty pre-history traditions to some respect for modern technology that enables women full participation (and just might save the world).