It seems hard to believe now, but we all sat around and made predictions about 2012 way back in 2011.

We were so young!

A year and some months later, we revisited that thread and pointed and laughed at everyone who made bad predictions. Those were some good times.

Anyway, it’s that time again. We sit about a year away from 2016 and there are oceans of predictions to make. Who will be the Republican nominee? Who will he pick as VP? Will the presumptive Democratic nominee become the actual Democratic nominee? If so, who will she pick as VP? If not, who *WILL* be the nominee and who will they pick to run with them? What catchphrase are we going to be soooo very sick of by this time next year? 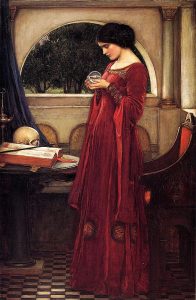 Remember: you don’t get to make fun of people for being wrong if you don’t write your predictions down! (Well, you probably can get away with it. It’d be bad form, though.)

What do you think is going to happen?

(Picture is The Crystal Ball by John William Waterhouse. Picture is in the public domain.)