Priceonomics has an article about the end of the one-hit wonder:

From 2005 to 2010, the fraction of songs by artists that never made the chart again hit an all-time low. It’s important to keep in mind that these numbers are conservative, as several of the bands that generated these possible one-hit wonders could still hypothetically produce another hit someday. In other words, UGK still has a chance to write another “International Players Anthem” and scale the charts again (note: as one reader points out though, this particular chance is extremely unlikely).

This is part-and-parcel of a larger phenomenon that they talk about, which is the increasing conservatism of the radio in general. My favorite story is when a conglomerate purchased a very popular radio station in Colosse that was known for introducing new artists to the nation. They decided that the station would be even more popular if they declined to play any single that hadn’t been on the radio for at least a month. Within a year, they seemed to have changed formats and were playing techno and dance music. But for the same reasons that the radio stations are not keen on playing new music, they’re also less keen on taking a chance on any new artists. Which means that they’re less likely to run across that otherwise mediocre band with that one great song. Or more favorably, it could be described as giving artists with that one hit much more investment, helping to assure that they will have follow-up hits.

It’s an interesting article, and you should read it.

According to the chart of one-hit wonders, the nineties were a watershed year for them. I mean, sure enough if I look through the list there are a lot of songs there that I like. The nineties were the prime of life as far as listening to new music, so of course they would ring familiar. The top song on the list is Duncan Sheik’s “Barely Breathing” which holds a particular sentimental value. Also holding some sentimental value is Deep Blue Something’s “Breakfast at Tiffany’s.” Unlike “Barely Breathing” that I like through and through I am relatively indifferent to the song itself, but some time after its release I met Porky, and it informally became our song. Which if you remember the song, is kind of odd because it’s a song about a relationship falling apart and seems about as sincere as a snake.

Some of those on the list I was surprised to see, mostly because I remember followups that I thought were as good as the initial release. For instance, after “Sonny Came Home,” Shawn Colvin released “You and the Mona Lisa” which I consider far more memorable. And while I consider “The Freshman” to be the best Verve Pipe song, I thought “Hero” was a pretty solid follow-up.

When I got Rhapsody in 2004, I actually started listening to some of the CDs of a lot of one-hit wonders from the 90’s. And… well for a lot of them there was a reason that they only had that one hit. This was not news to me. Everybody’s taken a chance on a CD only to discover that either they poured their heart out into the one song, or it was the one song that they didn’t write themselves. One of the biggest surprises, though, was Marcy Playground, whose “Sex and Candy” makes the list towards the bottom. It turned out, they were a band that I liked through-and-through.

Of course, good music stopped coming out around 2011, which coincidentally is when I turned 33:

When you reach 33 years or older, you will stop discovering new music, according to a new online study. New research, based on U.S. Spotify users, concludes that 33 is the average age when people stop listening to new music.

“While teens’ music taste is dominated by incredibly popular music,” the study says, “this proportion drops steadily through peoples’ 20s, before their tastes ‘mature’ in their early 30s.”

The study reports one reason for people’s transition away from popular music:

“First, listeners discover less-familiar music genres that they didn’t hear on FM radio as early teens, from artists with a lower popularity rank. Second, listeners are returning to the music that was popular when they were coming of age — but which has since phased out of popularity.”

The research also suggests that “men and women listen similarly in their teens, but after that, men’s mainstream music listening decreases much faster than it does for women.” While people with children tend to stop listening to new music earlier than their peers. 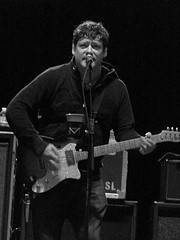 I actually started stopping well before 33. Mostly. Every now and again I will fire up Pandora and find some new artists. But country, which was one of my staples, started shifting away from what I enjoy. The local music scene – and its general flavor – that fueled a lot of my listening kind of died. Alternative and a lot of pop speaks rather specifically to a phase of life I’ve passed. So the primary use of that genre is to take me back to a different time, and old music does that better because it was there with me. Also, I listen to less music of any stripe.

Another factor that could have hastened the decline of my interest in new music was is the collapse in price for exposure. Which sounds wrong, but near the tail end of the phase of my life where I listened to new music, Rhapsody occurred. And then, suddenly, it was all there. In an alternate timeline, I would have had to buy CDs one at a time and would have had to try new things and give them a chance. Remember when you were young, your resources were limited, and you got that new CD? How you listened to every track? These days, apart from the audiobooks I listen to in lieu of music, I no longer have to listen to a song for long enough to really absorb it. I’m not as invested. In that sense, those who argued against the availability of music may have had more of a point than I realized.

Either that, or really it just all went downhill in 2011.