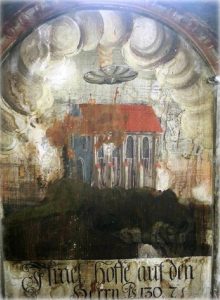 Both also deny the orthodox Christian doctrine of the Trinity (something Judaism rejects too). Mormonism’s Jesus is divine but not part of “the Trinity” as articulated by the Nicene Creed. Mormonism technically isn’t polytheistic but henotheistic, something which, by the way, texts of “the Bible” arguably support.

If Christianity defines according to its orthodoxy, then both Mormonism and Islam are “not Christian.” If, on the other hand, Christianity can encompass something broader, then both of those faiths are arguably like Arianism and Socinianism: Christian heresies. (Indeed, if I’m not mistaken, Martin Luther termed Islam such.)

The Jesus of Islam is not fully God. Is he “non-divine”? Well he is not fully so. Perhaps not at all in his nature (which would distance Islam from Arianism and Mormonism, both holding Jesus’ nature divine in some sense). But Islam’s Jesus certainly is someone divinely special (making Islam more akin to Socinianism this way).

Yes, Islam’s Jesus is special — indeed divinely so — in the faith. Not only is he a prophet, but one Allah whisked into Heaven before death (as opposed to Jesus dying and being resurrected) and who will return at the end of days to play a central role in end times.

In addition, Mormonism and Islam also share a cosmic vibe. I describe Islam’s cosmic vibe below. But if we think about it — if God is the God of the entire universe or at least something beyond the Earth itself — arguably most or all religions are cosmic. So, Scientology, when we find out its secret teachings, seems exceptionally weirdly cosmic, until we realize “cosmic” is not so exceptional when it comes to “religion.”

God the Father in Mormonism isn’t — as I understand — like the God of orthodox Christianity and Judaism (and Allah?), the uncreated creator, the unmoved mover. Mormonism’s Elohim may well be a created personal being. Created by Whom or What? I think that’s something on which Mormonism is agnostic.

But Mormonism can get quite cosmic in how it deviates from traditional monotheism.

Ben Franklin, Enlightenment thinker he, anticipated this. Indeed, Mormonism, because of when and where it was founded, perhaps drew inspiration from Franklin, here.

The God of the skeptical, scientifically minded 18th Century Enlightenment was, in its most radical form, the cold deist God. That reasoning held something had to create the universe as a watch needs a watchmaker. But the personal God of the Bible was too anthropomorphic to be so advanced a being. Humans could never “know” and “understand” as the scriptures intimate Such that is so far above and beyond us. Ben Franklin, early in his life (teenager) thus became a “thorough deist.”

But Franklin soon abandoned such strict deism. He desired to worship a more personal God. So his next stop — where he attempted to reconcile Enlightenment with worship of a personal God — was something quite cosmic, indeed proto-Mormon. As he described it in 1728:

When I think thus, I imagine it great Vanity in me to suppose, that the Supremely Perfect, does in the least regard such an inconsiderable Nothing as Man. More especially, since it is impossible for me to have any positive clear Idea of that which is infinite and incomprehensible, I cannot conceive otherwise, than that He, the Infinite Father, expects or requires no Worship or Praise from us, but that he is even INFINITELY ABOVE IT.

I CONCEIVE then, that the INFINITE has created many Beings or Gods, vastly superior to Man, who can better conceive his Perfections than we, and return him a more rational and glorious Praise. As among Men, the Praise of the Ignorant or of Children, is not regarded by the ingenious Painter or Architect, who is rather honour’d and pleas’d with the Approbation of Wise men and Artists. .

It may be that these created Gods, are immortal, or it may be that after many Ages, they are changed, and Others supply their Places. .

Howbeit, I conceive that each of these is exceeding wise, and good, and very powerful; and that Each has made for himself, one glorious Sun, attended with a beautiful and admirable System of Planets. .

It is that particular wise and good God, who is the Author and Owner of our System, that I propose for the Object of my Praise and Adoration. .

Note that Franklin, for the rest of his life articulated belief in an active personal God, but never repudiated or retracted the above “cosmic” sentiment. (I’m not sure, however, whether he continued to believe in such.)

With that, let us turn to the cosmic aspect of Islam. It relates to their view of Jesus and End Times Prophesy (ETP). Personally, I don’t believe in ETP, not because I am an atheist (I am not), but because the holy texts that give rise to such are too trippy; their meaning — if the texts are not simply delusional hallucinations — is not to me ascertainable in any clear sense.

It’s very sad, what that piece argues, in my opinion: Two beings will return during End Times, claiming to be the “real” Jesus. Trinititarian Christians will pick one (the Jesus who claims to be God), Muslims the other (the one who doesn’t, but sent from God to correct that misunderstanding). The “fake” Jesus is to Muslims the false messiah, to Christians the false prophet who aids the anti-Christ.

The Muslims’ returning Jesus will show his non-Godhood by marrying and having kids when he returns. He will then finally die and be buried next to Mohammed.

The Muslims’ name for who they believe will be the fake Jesus is “Dajjal.” But to orthodox Christians, this Dajjal who claims to be Messiah and God is likely the real Jesus.

This Dajjal, according to the Islamic holy texts, will be one eyed, or at least blind in one eye and return to Earth on a flying donkey or mule. Now, the Protestant fundamentalist theologian who tried to articulate the Islamic Dajjal is likely the real Jesus said something along the lines of (I’m paraphrasing) “of course I don’t believe Jesus will return with one eye riding a flying mule.”

That’s ridiculous, right? But how much more ridiculous than when the Book of Revelation speaks of a dragon who will wipe out 1/3 of the stars in the sky with its tail (and so on). “But that can or does mean, ABC and XYZ” a believer in such might object.

Indeed, consider what Islamic scripture says about the donkey/mule that the Dajjal will return flying on: It “will have a distance of one mile between its two ears.”

A distance of one mile between its two ears? Hmmm. If I were an “aha, that proves it” believer in ETP, I’d say that sounds remarkably like a flying starship.

Jon Rowe is a full Professor of Business at Mercer County Community College, where he teaches business, law, and legal issues relating to politics. Of course, his views do not necessarily represent those of his employer.