Just as the real intent and its moments appear… as content, they are likewise necessary also as forms in consciousness. They come forward as content merely to pass away again, each making room for the other.

Submitted for your consideration and feedback:

State of the Discussion 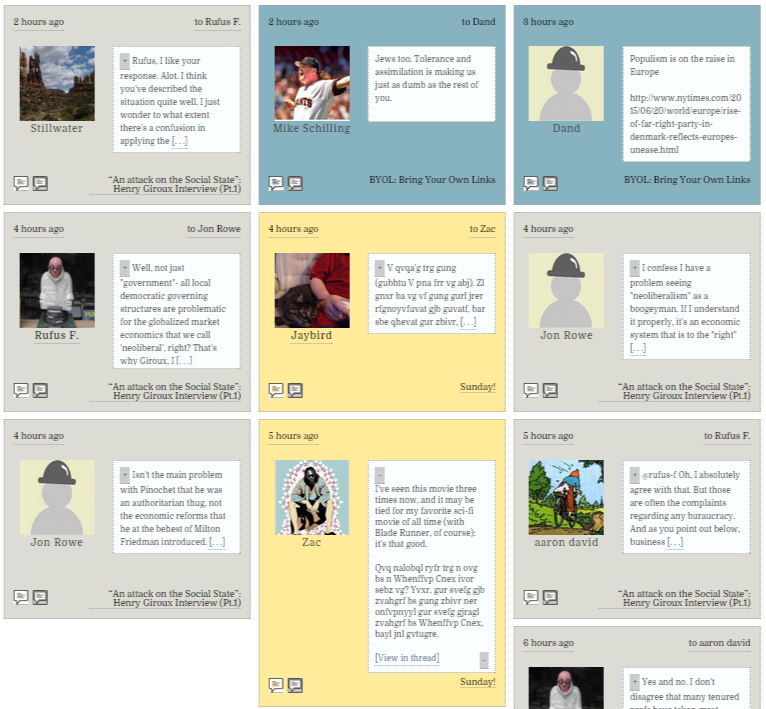 Inspired by a discussion with Will Truman (months ago) in the OT Development Group, a new page called “State of the Discussion” (SoD) is available under the “Commentariat” link on the site’s main navigation bar, or in short form in the site sidebar. Another pop-up version of SoD is available via the sidebar link.

Comments are color-coded by post to make distinguishing or associating them easier, and also to provide an at-a-glance “heat map” of discussion at any given time. The entire output is paginated, and the display should adapt to small screens. Eventually, the full State of the Discussion page can incorporate additional Commentariat features still in  development.

Before moving on, a sub-word on “Gifts of Gab” (aka: “WP-RecentComments“):

Many of us like GoG just the way it is or was. We have grown accustomed to its face: It really makes our day begin, and so on.

Please brace yourself if you’ve grown close to it.

I’m sorry to have to tell you that Old GoG is not in very good shape. Its code is brittle, complicated, and error-ridden. Last updated 3 years ago, it is no longer being managed by its original developer, and it has not been adopted by anyone else. Furthermore, I suspect it may in fact be a Trojan Horse planted by Chinese government hackers!

OK, the last part was a bit much, but WPRC is on the way to the Old Doohickeys Home.

The main “front end” (public facing) symptoms of its ongoing deterioration were slow initial loading and incomplete integration with the WordPress avatar system. 2 In view of other problems and vulnerabilities that tended, for now, to show up in error logs and behind-the-scenes (“back end”) conflicts, I was actually advised by the OT webhost to nuke it from orbit, etc. – not even keep the code around in non-activated state (!). Still, I didn’t want to rush into things until I had a replacement that at least approximated GoG’s virtues relative to other WordPress recent comments doohickeys, and that maybe brought some of us some compensations.

So, I’ll ask the site-conservatives among you all to give the new puppy a chance.

For now, in order to emulate GoG’s pagination (its best feature, IMO), you’ll have to use the pop-up or the SoD static page – with which you can scan comment activity 48 comments at a time, page after page for over 10,000 pages if you feel like it. You may also have to develop different habits tabbing, forward-ing and back-ing, etc., if you were someone who used GoG as an ersatz dashboard.

SoD display (in sidebar, popup, or page) can be further modified, though fully emulating GoG is a different project, and one that I confess I am reluctant to undertake. Still, If there is a lost option you are desperate to see restored, let me know, and we can discuss.

Now, we can move on to features that, incidentally, SoD in widget form and otherwise happens to have, but that GoG doesn’t and can’t.

Frequently as a commenter, when I’m engaged in discussion, I want to be able view another commenter’s statements, or prior additional statements, while responding. Maybe I want to be sure to quote the other ordinary gentleperson accurately or want to know more about where heshe is coming from or where the particular exchange began.

By clicking on the CTT icon, the first one, colored white, you will be able to bring up a new overlay page showing just the particular commenter’s comments on that discussion, in reverse chronological order: 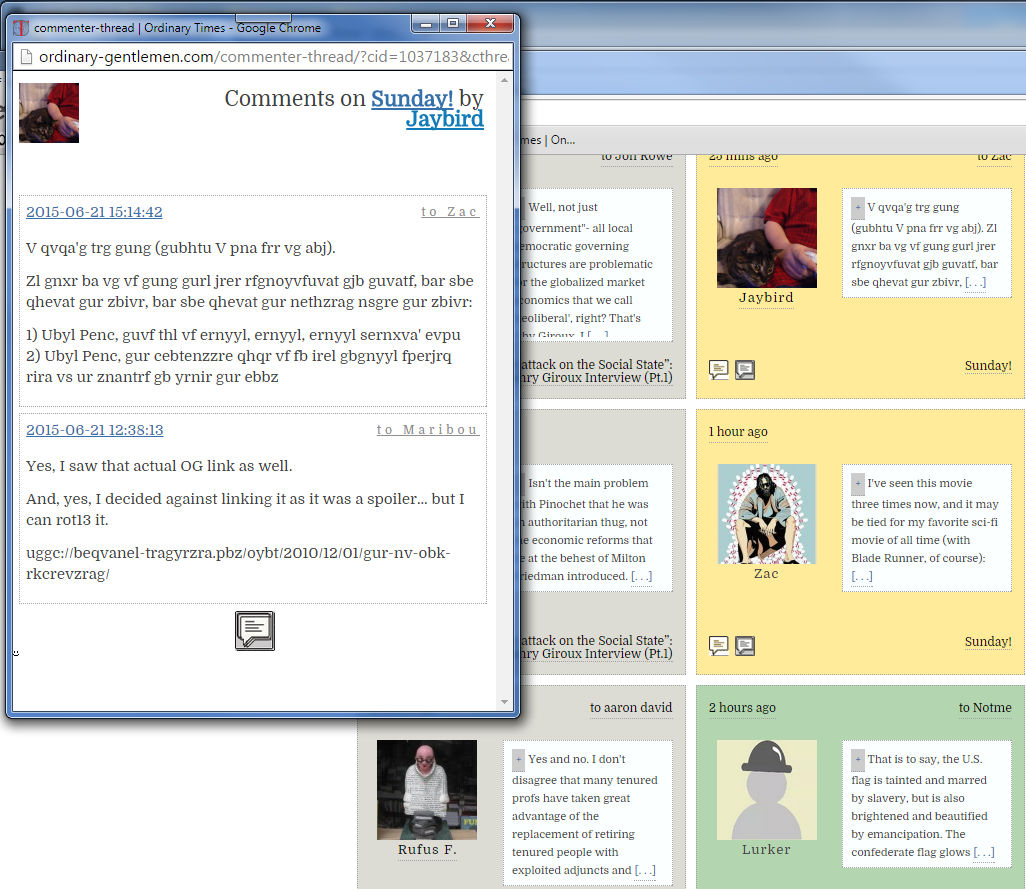 Or, as invoked from in a thread: 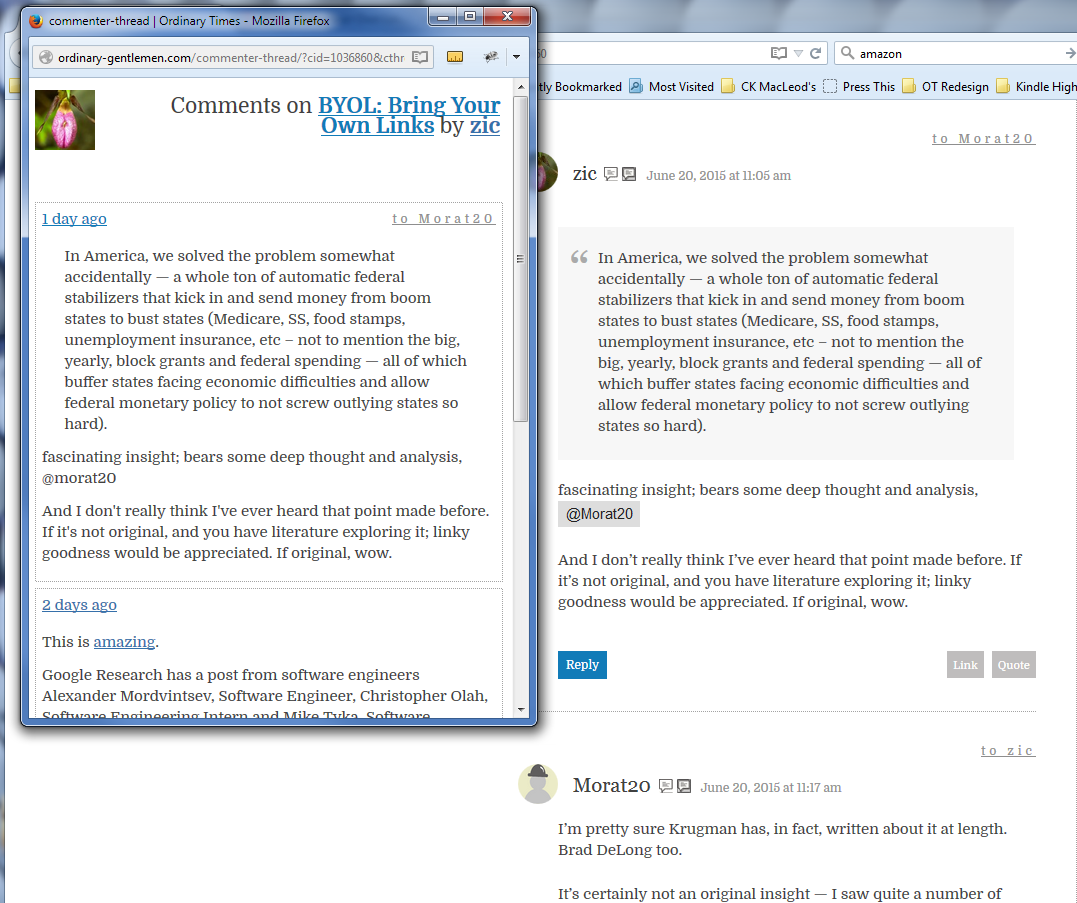 At the bottom of the popped-up CTT page, as on every comment on a given comment thread, users can find another icon-link, this one colored gray, to the given commenter’s archive of comments going back to the misty origins of all existence, or, rather, to the first comment ever at the site under the commenter’s name+email combination.

If the commenter happens also to be a registered user, then the code will seek all associated comments – therefore covering multiple email addresses – but, if you changed email addresses sometime between now and the beginning of all relevant time, or regularly comment from different accounts, and were or are not a registered user (typically a contributor or author at this point), the archive will be incomplete: For now the objective is to add some useful background to discussions and treat comments in general with more respect, not to perform volunteer identity tracking for government security agencies. 3 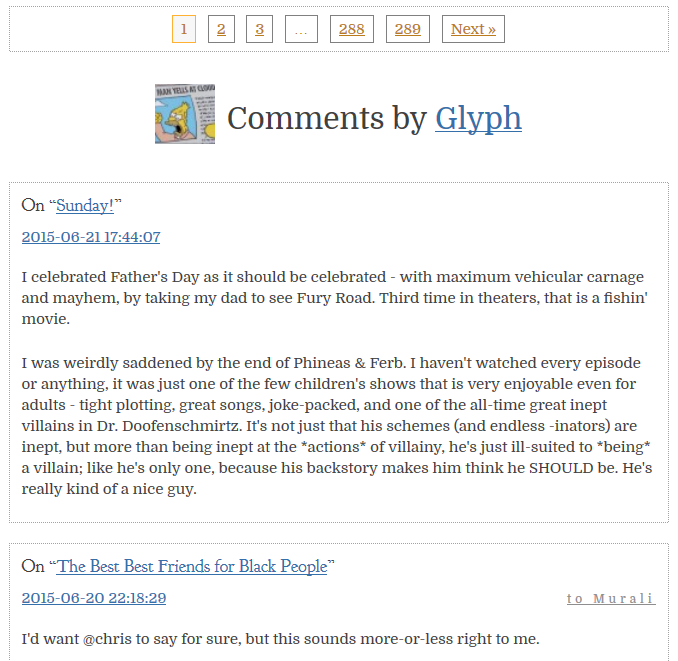 Happy Father’s Day to you, too, Glyph.

Other and Next Steps

These new features are all in relatively early, unbackfed stages, and at this time would have to be customized on a per-installation basis, not distributed as a one-size-fits-mostly-all basis (i.e., as a WordPress Plug-In).

I should note that the main precedents for CTT and CA were from developers who were more interested in robots than people: Their work was valuable for me, but their concern was less “advancing the conversation” than boosting search engine rank by creating new places or pseudo-places for a particular type of search engine to register: In short, it was mainly an artificial rank-boosting deal, or was intended to be. Disqus and some other third-party commenting systems offer some similar more directly user-oriented capacities, and hosts of snazzy features worth wishing for and, where possible, imitating, but, when a site locks into a third party system for a major feature, future development will necessarily be constrained. I’m against that.

You may notice some other minor enhancements – including re-location of the site search bar, addition of a comment editing toolbar, and creation of a new default avatar (h/t James K): The theme of this work, at least on the “front” or public-facing end of the site, has thusfar centered on the OT/OG Commentariat, which most participants here consider a major if not the major asset of the site in all of its manifestations. I expect to do much more along these lines, but, pending feedback and suggestions on this latest round of changes, I think we can justify focusing more attention at the author’s or editor’s or lurker’s “site upside-up” level.

Screen captures and original graphics by the author.