Lists of Fallacies Have an Important Shortcoming

I missed this discussion of the tu quoque fallacy here on Ordinary Times the first, second, third, and fourth times around, not counting The Facebook Incident.

This is an oversimplification of what has gone on here, but to me the argument seems to boil down to Sam Wilkinson’s intuitions on one side and the collective force of formal deductive logic on the other. I find myself siding with the former.

My defense of Wilkinson will fall far short of an academic take-down of the tu quoque fallacy, so lower your expectations accordingly. I learned my epistemology on the street, so I lack the requisite tools for that.

Learning formal deductive logic the way it is typically taught has consequences that aren’t readily apparent to the student. I have my copy of the tenth edition to “Introduction to Logic” by Irving M. Copi and Carl Cohen in front of me right now, and five minutes of perusal illuminates how painful they find it to address the topic of probability. “Fallacies” are prominent and the subject of chapter 6, which begins on page 160.

The very last chapter of the book is when probability is first addressed. This single chapter spans less than 30 pages, and then the book is done.

Missing (based on my very brief scan) is any indication that information can influence the probability that a given claim is true without actually proving the claim.

In the world of formal deductive logic, a proposition like “All Eskimos like fish” is not proven until you have assessed the position of every last Eskimo (or survey everyone who doesn’t like fish and find that none of them are Eskimos). If there are 1,000 Eskimos, and you haven’t asked any of them, your claim has the same standing as someone who has asked 999 of them. (That last person might be the one Eskimo who objects to your naked stereotyping.)

Of course, I know that the authors in particular and logicians in general are smart people—smarter than me. I do not mean to say they are ignorant of the fact that information can act as evidence for a claim but fall short of proof. Instead, my claim is that those of us who consume these frameworks and make a habit of identifying logical fallacies sometimes lose sight of this fact because it isn’t part of the framework.

Take a look at an example of the “argument from authority” fallacy from Wikipedia.

Note that this is a “fallacy” only if you hold yourself to the high standards of deductive logic, which is unfortunately a standard so strict as to be powerless to prove even really obvious stuff.

Consider the claim “Schindler’s List was a movie.” How can we prove that?

It has an IMDB page? OK, are all IMDB pages for movies? Are all movie IMDB pages actually for movies? Those are questions that require exhaustive analysis of each IMDB page to answer.

Deduction works great if you need to know what happens when you bisect an equilateral triangle. And it will even work to show that Schindler’s List is a movie if you make big assumptions like there are no falsely remembered movies, which seems like an obviously false assumption. Surely there are people who misremember movies. It says something when you have to assume something that is probably false to prove something that you already knew was true.

Here in real life, almost all non-mathematical claims need to have probabilities attached to them. Even silly claims like “Jews conspired with Satan to rule the world” have vanishingly low probabilities assigned to them rather than simply being false:

I don’t think you could get up to 99.99% confidence for assertions like “53 is a prime number”. Yes, it seems likely, but by the time you tried to set up protocols that would let you assert 10,000 independent statements of this sort—that is, not just a set of statements about prime numbers, but a new protocol each time—you would fail more than once.

When nothing can be proven with rigorous certainty, you deal with evidence. Certain evidence increase or decrease the probability of a claim being true. My understanding is that it takes philosophy majors a while to get to coursework that actually grapples with this.

There is a reason for this. Aristotle is from the negative fourth century. The idea that probability could be studied is a recent innovation of the 17th century. Before that, probability was regarded as something outside of reality and therefore totally beyond analysis. This blind spot lasted two millennia, and it is a mistake whose impact lingers in the logician’s curriculum today.

In real life, claims are not assigned by all-knowing teachers. They come from people. The fact that they believe them is (weak) evidence in support of the claim. If the claim is in the person’s area of expertise, the evidence should be given greater weight. At no point does evidence rise to the standard of a deductive proof, but that doesn’t mean it lacks any value as evidence.

You wouldn’t know this if you looked up logical fallacies somewhere. Many of the fallacies listed are only fallacies by the standards of formal deductive logic and would serve real-world truth seekers poorly because they throw out evidence.

This finally brings us to the tu quoque fallacy “that attempts to discredit the opponent’s position by asserting the opponent’s failure to act consistently in accordance with that position”.

Let’s make an example. Imagine you’re at the horse track and someone tells you Red Octopus is going to win big. You hear a long list of convincing reasons why this is likely to happen. You are convinced and are ready to place your own bet. Just as the person is leaving though, you catch sight of their own ticket, which has a large bet placed on Blue Squid.

By deductive logic, the fact that the person made a bet inconsistent with the claims doesn’t reflect on the validity of the claims. If you’re actually using your head though, you won’t put a dime on Red Octopus.

We don’t have the information required to disprove the person’s claims, but we have strong evidence that the person disbelieves them. Strong evidence isn’t proof, but it isn’t nothing either.

But is the fact that a person disbelieves an argument reason to doubt it?

Yes, it is! The reason people ever bother asking questions is because we believe that other people’s beliefs have evidentiary value. It’s the reason when someone answers a question we don’t discount any answer that fails short of a deductive, logical proof.

If you step through a typical list of fallacies, you’ll see this pattern again and again. Drawing a conclusion consistent with the evidence is labeled a “fallacy” only because the evidence falls short of deductive proof. They are a great way for smart people to make themselves stupid. 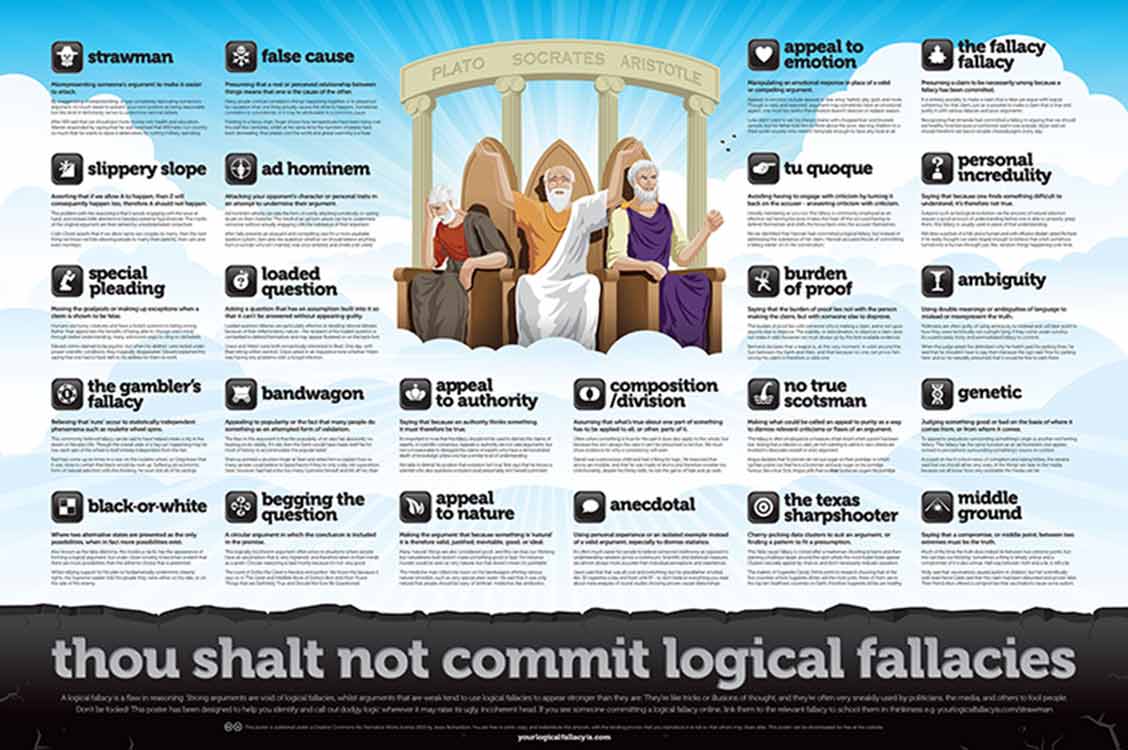