Is it OK for Rich People to Shop at Thrift Stores like Goodwill and the Salvation Army?

These stores don’t do income checks. Anyone can walk in and buy things. But at least some people feel that since the intent is to offer goods for poor people, buying from Goodwill prevents those people from getting a chance at those goods.

I would argue that for-profit thrift stores are certainly OK. The point of such stores is not to help poor people. It is to provide a low-cost option to the general public.

Goodwill is a non-profit though. In its case, I think it’s worth looking at its mission.

People donate their gently used stuff to us, we sell it in our stores, and we use the money we raise to open doorways for local people who need jobs but lack job skills and opportunities. We focus on the folks in the greatest need who are ready to transform their lives, and offer a hand up, not a handout. This year, more than 600 people will get jobs through SFGoodwill

I don’t see any reference to the idea that they would like to sell goods only to poor people. It sounds like they could fulfill their mission just fine by reselling gently used Mercedes to rich people. Or smartphones.

This letter by Goodwill CEO Jim Gibbons communicates the same sentiment. The same goes for Goodwill’s About Us page. The accomplishments they list are all about job programs for their targeted beneficiaries, not about selling goods to poor people.

Here is their IRS Return of Organization Exempt From Income Tax form. I did not read it line by line, but it also seems to indicate that Goodwill considers itself foremost a jobs program, with no specific desire to give poor people a cheaper place to shop.

I’m not able to easily find clear guidance about the Salvation Army as easily, but it seems they use their stores’ profits to fund their alcohol and drug rehabilitation programs. 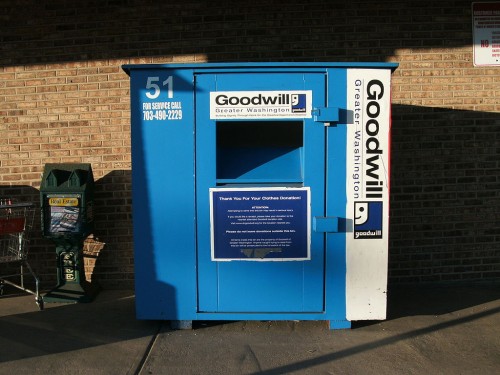 If the rich make sure they don’t shop at the Salvation Army, they are ensuring that the costs of such programs are funded solely with profits raised from selling things to poor people. When put that way, rich people refusing to shop there actually comes across as awful.

By shopping in these places, it seems you are supporting the business that funds programs to help people in what at least superficially straightforward, unobjectionable ways.