An EITC Increase Versus a Minimum Wage Increase

Warren Buffett has a piece in the Wall Street Journal supporting an increase in the earned income tax credit (EITC) as an alternative to an increase in the minimum wage. I’ve seen several bloggers link to it approvingly, but none that discuss the differences between the two approaches, so I will try to fill that gap.

Minimum wage laws are regulations, but they can also be equally well conceptualized as a tax on employers of minimum wage workers paid directly to the employees they employ. To help see this, visualize employers cutting a check to the IRS for the difference between what they pay the worker (say $1/hour) and whatever the minimum wage level is wherever they work (say $10/hour). The IRS then immediately hands the check over to the employee. The employee thus receives his regular paycheck of $1/hour plus a check from the IRS for $9/hour for a total of $10/hour. Minimum wage regulations thus function from an economic perspective exactly the same as a tax levied on the employer and a cash benefit given to the employee.

I should add at least one caveat, however. The IRS doesn’t actually have to do anything if you enact a minimum wage increase rather than a tax and immediate hand-over. There are no extra administrative burdens on the IRS, and only one check is cut.

In contrast, the government pays the EITC. In general, the more you work, the more you get up to a point, so the EITC avoids setting up a situation where someone might get more money by working less. (You can decide for yourself whether you think that is a good thing.) 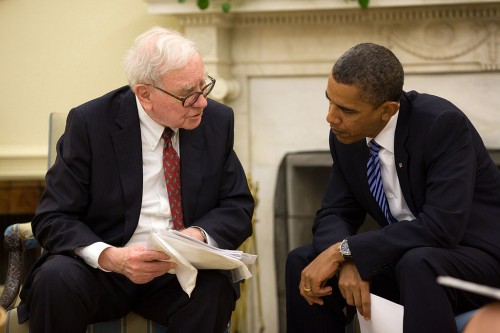 As Buffett notes, to actually receive the EITC, you have to file a tax return. Not everyone who qualifies knows to do this. If I had to guess, it’s probably the people in the communities who need it most that are least likely to know the EITC is available to them since that’s how things work with almost every other government benefit. The EITC does add administrative load that increasing the minimum wage doesn’t.

Another difference is that the EITC is that it is a lump-sum payment rather than a supplement to each paycheck. This probably has consequences on how people will spend the money. If you make payments more frequent, people would be more likely to spend them on day-to-day living expenses. A yearly lump-sum payment, in contrast might be used to pay down debt, or some other one-off expense. Despite its name, the EITC might feel more like money from the sky rather than money the worker “earned”. People tend to report this feeling about tax refunds in general even if they know intellectually that it’s actually their money just like what they receive in their paychecks.

The EITC incentivizes fraud. I now know multiple people who have had tax refunds filed in their names by people who are trying to receive EITC. If you know someone’s name and social security number, you are most of the way toward being able to file a false return in their name. One could argue this is an issue with the current IRS tax return, not with the EITC, but the EITC is what makes it attractive, and increasing the EITC would make it more attractive.

On the plus side, since the government pays the EITC, companies are unlikely to hire fewer workers as they would in response to a minimum wage increase. This is the benefit of the EITC that Buffett cites as most important to him.

Priceonomics wrote recently about wage theft. If you increase the minimum wage, you increase the incentive for employers to commit more wage theft. If you check the link, you’ll see that many of the professions listed as most subject to wage theft are jobs that probably pay close to minimum wage. I do not think this is an accident. Increasing the minimum wage will have the perverse effect of burdening the companies that are most studious in paying their workers for time worked the most while having less of an effect on companies that commit wage theft. Again, you can argue that this should be dealt with through enforcement of existing labor laws, but that is less likely to happen.

As noted above, minimum wage increases are paid by companies that pay workers such wages. (I’m ignoring the important issue of tax incidence in this post.) The EITC, in contrast, is paid by “the government”, which practically speaking means wherever we are likely to capture taxes from in the future. I expect readers will be divided on whether this difference is a bug or feature of the EITC. If you think there is a general need to help poor people and that need should be shared by everyone, you should consider the EITC. If you have a strong dislike for the sorts of companies that pay their workers minimum wage, then you are more likely to think forcing the burden to be shouldered by those companies is a feature of minimum wage laws rather than a bug.

But none of the above is the most important practical difference between the EITC and a minimum wage increase. Even though the minimum wage can be properly conceptualized as a tax on companies collected directly by workers rather than by the IRS, it doesn’t actually show up on any federal budgets. No real-life people actually think of it as a tax increase. Minimum wage laws are the perfect way to have the exact same effect of increasing taxes without having to increase taxes. “My opponent voted for a regulation that is the economic equivalent of raising taxes” is not that gaming an accusation. That is the minimum wage’s best feature politically.