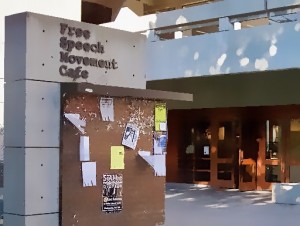 In principle, I share her concern that an overprotective atmosphere goes farther than highlighting diversity and eliminating harassment and invidious prejudice. In practice, I know full well that examples chosen for her recent column in the Daily Beast, and thus infer that examples chosen in the book she plugs in that column, have been cherry-picked for their potential to elicit outrage.

Outrage drives media sales, after all, nearly as well as does fear and possibly better than does envy.

Also in practice, I find both the longevity of this particular academic windmill, and the longevity of the political fad of tilting against it for publicity and profit, dreadfully familiar. I had hoped that both the academy and the punditocracy would have found better things to do with their time than continue clutching at their respective pearls over overwrought students and publicly irritated professors being tediously offended by one another.

Now, I’ll not defend speech codes here, particularly not the somewhere-in-between-silly-and-Orwellian instances of enforcement described in Ms. Powers’ column. Not that I would anyway.

Rather, I want to point out two things. First, Ms. Powers calls out for criticism not only official “speech codes” and the clumsy, draconian way that some college administrators wield them. She also points out something else, which while she overly says is less important, is nevertheless what she leads off with.

On today’s campuses, left-leaning administrators, professors, and students are working overtime in their campaign of silencing dissent, and their unofficial tactics of ostracizing, smearing, and humiliation are highly effective.

If this was less important than the official speech codes, why then did she begin her column by relating Chris Rock’s complaints that college audiences are too sensitive and easily offended to be entertained with his brand of sometimes edgy humor? That’s an example of cultural rejection, of the informal tactics Powers complains about.

I don’t know what they taught at Georgetown, where Ms. Powers went to law school, but I know at my own law school, anti-discrimination law was not taught as something that had all that much Constitutional implication. A significant lacuna in my professors’ presentation of anti-discrimination law. As a newly-minted attorney I believed, because I had been taught, that anti-discrimination statutes were an unambiguous good and a moral imperative upon the body politic to enact. The corpus of larval lawyers of which I was then a member had been exhorted: “Go ye forth, and enforce these laws, through civil litigation!” Such preaching convinced me — a younger, more conservative version of me than the me actually practicing this brand of law today — that being a private attorney general like this would be a way to simultaneously seek both personal enrichment and public justice.

Turns out, soon after picking up that banner I encountered defendants who protested, “Don’t I have freedom of speech?” The answer is, “Not if your speech creates a hostile workplace environment, you don’t.” Which sat uncomfortably with me because freedom of speech is important, too. So there has to be some point of balancing if we are to have both a discrimination-free environment and freedom of speech for individuals.

This seems like an intractable conundrum, resolvable only with a sliding scale of so much free speech balanced against so much economic equality. In fact, it isn’t. Fortunately, the law offers a reasonable response to that which is seemingly so outrageous to Ms. Powers. I propose that colleges can look to anti-discrimination law to provide an example of how rules can navigate between these two seemingly mutually exclusive ideals. Doing so requires what for some is seemingly a significant challenge: understanding nuance.

[N]ot every utterance of a racial slur in the workplace violates the FEHA or Title VII. As the United States Supreme Court has recognized in the context of sexual harassment: not all workplace conduct that may be described as “harassment” affects a “term, condition, or privilege” of employment within the meaning of Title VII. For sexual harassment to be actionable, it must be sufficiently severe or pervasive to alter the conditions of [the victim’s] employment and create an abusive working environment. … Conduct that is not severe or pervasive enough to create an objectively hostile or abusive work environment—an environment that a reasonable person would find hostile or abusive—is beyond Title VII’s purview. Likewise, if the victim does not subjectively perceive the environment to be abusive, the conduct has not actually altered the conditions of the victim’s employment, and there is no Title VII violation. Aguilar v. Avis Rent A Car System, Inc. (1999) 21 Cal.4th 121, 129-130 (most internal quotations and citations omitted).

So let’s break that down, because that’s a rather dense recitation of the rule in the context of sexual harassment in employment. In an educational setting, the test requires that four elements be proven in order to overcome a presumption that the communication is a protected expression of ideas:

All four of these elements must be satisfied before corrective action of some sort needs to be taken. If not, then what’s going on is free speech, free expression of ideas, and a listener’s subjective experience of outrage in response is the listener’s problem, not anyone else’s.

After all, the problem Powers writes about are when limits like these are not put on interpretation and enforcement of codes. When it becomes a matter purely of the “victim’s” subjective response to a statement, we’re in the world of the heckler’s veto.

Now, this test makes the word “reasonable” do a lot of work, especially for a word with such an indeterminate definition. In my private practice (and often with a view towards inspiring caution in my clients) I joke that the word “reasonable” is a jury question, which means that the issue of what is reasonable and what isn’t will be left to a group of twelve people who weren’t smart enough to figure out how to get out of jury duty. This is unfair. Jurors tend to actually reach reasonable results.

There is no reason that university administrators, professional academics, and even college students, can’t intelligently and collaborately form at least a broad consensus about what a “reasonable” campus environment is. I propose that it should be discrimination-free and equally welcoming to all people, and it should simultaneously be a place where challenging ideas are vetted fairly on their merits. It is not a place where there are “no wrong answers,” but also not a place where orthodoxy prevails. It is a place where learning, inquiry, and science occur. Learning requires making room for intellectual errors to take place, and for constructive correction of those errors to occur as well.

Well, that’s what I think. And I don’t think that these are either/or propositions. I also think rules of reasonability have the very happy benefit of depolarizing points of view. They force participants and advocates to portray themselves as reasonable, to pick out the reasonable concerns expressed by their interlocutors and demonstrate their accommodation of them or at least their willingness to do so. When confronting the question, “what is reasonable?” and encountering differing opinions, people force themselves to understand that others who think differently are not unreasonable or evil. A rule of reasonability does not mean compromise for its own sake, but rather mediation between one thing that is good (liberty) with another thing that is good (equality) so that competing versions of the good need not be set against one another as opponents.

There are real stakes here. Colleges are, after all, where the bulk of our future leaders will gain their early adulthood socialization, where they learn norms, where they learn political survival skills. Adherence to orthodoxy might be one such skill. Orthodoxy offers the refuge of certainty, whether that be an absolute antidiscriminatory ideology or an absolute free speech ideology.

To the ideologue, though, “reasonable” is an attack word: I am always reasonable, you are always unreasonable. Drilling down, we will inevitably find that to be “reasonable” means to “agree with me,” which by definition is an unreasonable metric of reasonability. A rule that forces many people to gather and debate what is reasonable is less likely to produce a result smacking of runaway orthodoxy than the contemporary Star Chambers that Ms. Powers alleges still exist on campus in 2015. Fortunately, ideologues will reliably retreat into the bailey when thus challenged: “A student shouldn’t be flunked out of a class for self-identifying as a skeptic of contemporary feminism” is one thing, “A student shouldn’t be asked to explain himself to a disciplinary board for endorsing his colleagues’ chant of #FHRITP to a female student” is something else entirely, at least in the context of people required by rule to mutually strive in good faith to form a consensus about the meaning of the word “reasonable.” Granted, they won’t always succeed.

What’s more, the ability to appeal to reason would a better skill to teach our future (and present) leaders: accommodating and molding cultural expectations, teasing out the good objectives of multiple stakeholders, and fashioning a result that all formerly competing parties can live with will produce a higher level of ability to mediate differing interpersonal interests, one which enables all of us to not only co-exist, but to mutually thrive — the great aspiration of politics.

Yes, the word “reasonable” is inexact and susceptible of many interpretations. Yes, participants begin a discussion of “what is reasonable” assuming that they are the reasonable ones and the people who disagree with them are not. But if there exists a magic word capable of getting people of good faith to deliberate in good faith, this is the word.

So come, let us reason together.

Image: Free Speech Movement Cafe on campus at the University of California, Berkeley. Detail from photo at Wikimedia Commons, altered by author.