Liveblogging my Reading of “If you’re a Conservative, I’m not your friend”

What follows is an edited live-blogging of my reading of Rebecca Roache’s “If you’re a Conservative, I’m not your friend” published in Practical Ethics. Roache is a lecturer of philosophy at Royal Holloway, University of London.

One of the first things I did after seeing the depressing election news this morning was check to see which of my Facebook friends ‘like’ the pages of the Conservatives or David Cameron, and unfriend them.

I’m sure that will teach them a lesson about the danger of succeeding beyond their wildest dreams.

I am attracted by the view that we should all keep the debate open, discuss our political views, take other people’s views into account, and revise and improve our own as we all benefit from this dialogue.

But that’s what all the people who de-friend anyone with contrary political views say.

Sure, social media can be a powerful and unregulated force for good, and we can all share our views through Facebook and Twitter—but, given that people tend to follow those who roughly share their views, we’re preaching to the converted. My Facebook feed today is full of posts and debates by compassionate, liberal people.

Yes, the world seems much nicer once you excise any of the people who disagree with you.

Then there is the fact that ‘engaging in political debate’ and ‘revising one’s political views in the light of rational argument’ are themselves hallmarks of liberal thinking, but not of conservative thinking. Conservatives, traditionally, base much of their politics on gut feelings or intuitions—what Edmund Burke in the 18th century called ‘prejudice’, and what Leon Kass has more recently termed the ‘wisdom of repugnance’. Far from viewing it as desirable to subject their political beliefs to reasoned evaluation and criticism, many conservatives view reason as a corrupting influence.

Maybe things are different in Britain, but here in the colonies, Tod Kelly wrote a 2,247-word rant scolding a conservative outlet for using overly clever reasoning to get readers to reconsider their views. In the US, I rarely see liberal thinkers flirting with the merits of conservative ideas. Liberals do engage in a lot of political debate, but it is exclusively debate about which type of liberal one should be. This is a form of openness, but the options are carefully curated. Any view can be tolerated as long as they can all be collapsed down to a vote for Hillary Clinton at the end of the day.

[T]he view that I have arrived at today is that openly supporting a political party that—in the name of austerity—withdraws support from the poor, the sick, the foreign, and the unemployed while rewarding those in society who are least in need of reward…

This is ironically an illustration of the lack of openness on the part of liberals. Roache apparently believes that the true desire of conservatives is to hurt the poor, sick, foreign, and unemployed. This hurting is an end goal in their utility functions. But they can’t say that out loud though, so they come up with a plausible excuse that will still let them do the same thing. That plausible excuse is “austerity”.

Sorry, but each of the last 10 Bond villains I’ve seen were more realistic. If Roache had been friends with any conservatives before, she wouldn’t make this mistake. If Roache were truly open to considering new ideas, she wouldn’t be failing the ideological Turing test so miserably. She always was intellectually isolated. De-friending people online just formalized that truth.

…to express one’s support for a political party that does these things is as objectionable as expressing racist, sexist, or homophobic views.

Sooner or later you’re left doing what Roache does here, which is quite literally arguing that allowing consumers to buy things from people who live in other countries is as bad as racism.

The right in the US has its own version. It typically invokes Hitler rather than racism though since racism hasn’t existed in the United States since 1865 and was never all that bad anyway. Being rich in San Francisco like suffering through Kristallnacht.

To hear conservatives and liberals tell it, the United States is just racism and Hitler all the way down. I refer everyone involved to this Will Truman post that states “If you say that X is just as bad as Z, then you are in essence saying that Z is no worse than X.”

Racism, sexism, and homophobia are not simply misguided views like any other; views that we can hope to change through reasoned debate (although we can try to do that). They are offensive views.

I think it says something that the author here considers a view being offensive worse than it being incorrect. I can’t think of a sentiment I’d like to hear less from a university lecturer.

I’m also left wondering about whether an outlet that calls itself “Practical Ethics” shouldn’t ask obvious followup questions like whether it is OK to be friends with people who are friends with conservatives. Is it ethical to employ conservatives? Also, since Roache complains that conservatives isolate themselves, how ethical is it for her to do the exact same thing? 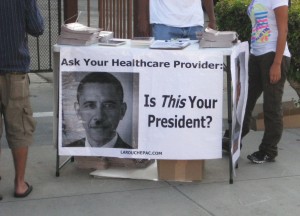 Photo credit: a touch of teh crazee

Additionally, Roache’s claim that political discussion doesn’t change viewpoints seems wrong as a point of fact. Sorry about the US-centric nature of my experience, but I see articles about libertarians changing their views to support action on climate change. I don’t see liberals becoming climate skeptics. We’ve seen huge, meaningful changes in public opinion on miscegenation and gay marriage happen in a couple of decades. For all their presumed openness, I don’t know a single liberal who went the other direction. The Atlantic meanwhile reports to us that conservatives succeeded in the United Kingdom by adopting a lot of liberal viewpoints on certain issues. Why would they do that if they are incapable of change? In what ways have liberals in Britain demonstrated their open-mindedness by adopting conservative views? Or is all of this make-believe?

None of this is to say Roache shouldn’t de-friend conservative friends. It’s probably a net gain for all parties. I just can’t help but snark at the attempt to portray morally righteous stand.