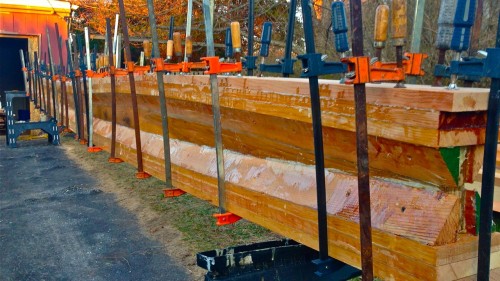 I’ve written about my friend Bob Wise before here at OT. This time I’m simply going to quote a recent Boat Bits post of his wholesale.

When I was a kid I spent a lot of time watching a friend of my father’s build a boat. A troller to be exact.

What really impressed me at the time was the fact that the builder didn’t have a “plan” but was building more by “feel”.

He’d set up his building space and a strongback of sorts and then added a single mold more or less in the middle of it and, for a couple of weeks, I’d watch him move the mold a couple of feet either way but mostly he’d just sit in a chair and look at the single mold sitting forlornly on the strongback…

I suspected my dad’s friend was a little nuts.

Then, one day in a great flurry of enterprise, the single mold was joined by another mold that looked suspiciously like a transom on one end and a piece of 3 X 10 pine on the other. The following day there were a couple of long 2 X 4’s as well… Things, as they say, were becoming interesting.

The day after, it seemed he was back to the moving the central mold a foot forward then back again two-step but he’d also taken an axe to the 3 X 10 and taken off some wood to form a rough but fair curve. A couple days later I woke up to find the transom, central mold, and the 3 X 10 were now connected by several 2 X 4 battens. The shape was beginning to look like the skeleton of a boat…

Then all hell broke loose… All of a sudden there was a near constant cacophony of boat building noise and everyone woke to the sound of saws and hammers. I remember for a couple of weeks the last thing I’d  hear every night was the rasp of a plane…

A couple of weeks later there was a real honest to goodness boat in the guy’s back yard. All in all it took a couple of months for a fiftyish-year old guy with hand tools to singlehandedly build a 42-foot troller which he proceeded to fish commercially day in and day out for the next twenty years or so.

I mention this mainly because it’s easy to forget just how simple boat building really is.

It was a really pretty boat.

If I’ve accomplished anything in my life, it’s because people like Bob took the time to tell me stories like the this one, and I was foolish enough to believe them.