Against all odds, sort of, the ruling Progressive Conservative Party of Alberta has fallen, and Canada’s most conservative province has put into power its most liberal major party:

It’s a massive shock that turns Canadian politics on its head. CBC has projected that the NDP has won a majority government in Alberta.

CBC is also projecting that the Wildrose Party will be the province’s Official Opposition, and party leader Brian Jean has been elected in his riding of Fort McMurray-Conklin. The long-governing PC Party has dropped to third place as the votes continue to pour in.

NDP leader Rachel Notley will be Alberta’s next premier. Her campaign has been said to have “shades of Jack Layton.”

The NDP’s previous best showing in Alberta was back in 1986 when the party took 16 seats, but by 1993 the party was shut out of the legislature.

As stated, the PC party won’t even be the official opposition. The party that has been in charge of Alberta for over 40 years has officially been shut out. 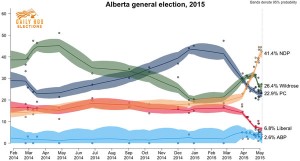 There are a number of factors to consider. First, the New Democratic Party of Alberta is not as liberal as its national counterpart. They’re cool with the pipeline, as they would need to be in order to win in the oil-rich province. Second, the Progressive Conservatives had become enormously unpopular, with liberals and conservatives alike, and that presented an unusual vacuum that they had a fortunate opportunity to fill. Third, despite what I am about to say next, this is the result of an enormous surge of support away from the other parties and towards the NDP. You can see the orange (NDP) spike at the right of the graph, and the collapse of the blue (PC) and fall of the green (Wildrose Party). That’s an enormous shift.

Having said that, none of that would not have mattered if the conservative vote weren’t so fractured. While the NDP is set to gain a significant majority of seats, at the time of this writing they haven’t cleared 40% of the popular vote. The two conservative parties, the Progressive Conservatives and the Wildrose Party, together combine for 53% of the vote (the Liberal Party as 4%). Since Alberta has single-member districts, the effect of the split vote doesn’t just keep either of the conservative parties from winning a majority in the assembly, but splits the votes in individual districts as well, handing the NDP an outsized number of seats.

Elections thrown by fractured voting are not new in Canada. In the last national election, the liberal parties won a majority of the vote but Conservative Harper became prime minister by winning a majority of the seats. Right now fracturing is helping the Conservatives with the rise of the NDP, though prior to that a split on the right between the Progressive Conservatives and the Alliance helped solidify the Liberals (though not to the point of throwing elections, as occurred for Harper).

I generally believe that two-party systems have a bad rap. In the US – at the national level – I believe multimember districts are a relative impossibility. And even though I may not care for the two parties we have, and would advocate some lesser changes, I am relatively content with the existence of two parties. However, you draft a constitution around the particulars, and the particulars in Canada are that for the last 25 years they have not been content with two parties. Unlike the US, a multiparty system is quite feasible in the context of their system, and I do hope that they look into it. It looks like the United Kingdom is headed in the same direction, and they’re in an even better position to explore the possibility than Canada.

Meanwhile, in the real world, the NDP has a province to run if not a true mandate. They are presented with the opportunity to show conservative Albertans that liberal governance is not such a bad thing. Regardless of how they got the seats, they have the ability to govern free and clear. Having achieved unexpected power, they need to figure out what to do with it.