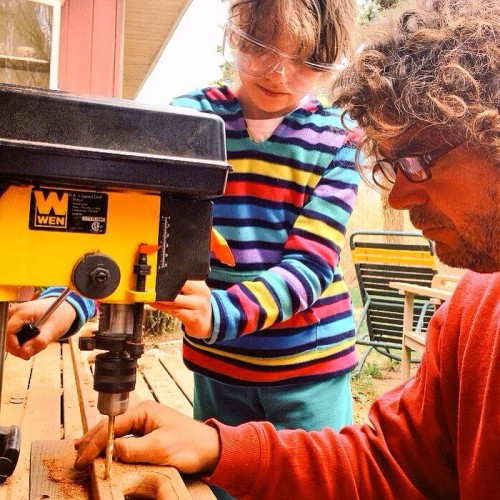 The youngest of the author’s two daughters learning the family business.
—
(The Montauk Catamaran Company Chronicles is an ongoing series of posts detailing the construction of Mon Tiki Largo, a James Wharram Designs Pahi 63 MkII. The author’s current boat is the catamaran Mon Tiki, a JWD Tiki 38, which he built in 2012 and currently operates as a day-sailing charter in Montauk NY. You can see all the posts in this series by clicking here.)

Responding to Three Ways to Think About Fresno:

This passage has been rattling around in my brain:

“[Skilled trades] are the main ways that people who are not going to be biomedical researchers, or federal judges, or corporate big shots can still earn a decent living”

This doesn’t even describe the career/life path of most of the kids who attend the Most Elite colleges, let alone all other college grads, letting even further alone the majority who don’t attend college. The drummer in my high school rock band went to Yale, then Harvard Law. He’s a law prof at U of O. Our bass player went to Yale too. He’s an art prof in the rural town where we all went to high school.

I take your point about trades. Hell, I’m living it. (Taking time out from carpentry on Mon Tiki to mash this out on my phone). The point I’d like to make is there’s a lot of space and options between federal judge (like my band mate Tom had his sights on) and shipwright. It sometimes feels that gets lost in the discussion of education, jobs, etc.

The author was kind enough to write back an acknowledge my comment. I’d like to elaborate further by relating a recent conversation with my father (whom you can better understand by reading this post).

Like her mother, Maggie is break-the-curve smart. She’s good at and enjoys a lot of things. “No, she’s really not sure. A lot to chose from.”

“Well has she thought about what she might like to do for a living. That’s a way to figure out what she could study.”

“Really hard to say at this point. She seen what being a commercial artist is from the inside. Her drawing is really strong, so I could see her pursuing commercial illustration. But she’s really strong in math and science too. And a good writer. Too soon to tell.”

“Well what about a back up plan?”

“He back up plan is to have her masters license by the time she’s 19, which will let her earn $20K-$40K a summer as a second skipper for our business. More if she works the full season.”

My father’s response was that he was going to go get his masters and come to work for me!

This is a new situation for our family. Not just myself, my wife, and our daughters, but for our whole family tree within living memory.

Per the linked post, my father’s father was a not well educated immigrant factory worker. Maybe that would have helped get my father a job in the factory, but it was not a trade or a business he could pass on.

My father was a physician, and again, that might have helped me get into medical school, but medicine is not a trade or a business that can be passed down to the next generation.

Mon Tiki and everything that goes into making Mon Tiki a business is something that can be taught, learned, and passed on right here: on our boat, in our home. That’s new ground for us.

Going back to another part of the same conversation with my father:

“It’s great that all the different things you and Amy know how to do have come together to make the boat run — music, photography, advertising, internet,” I realized my father had not apprehended that we very deliberately counted these things as assets and advantages when we set out to build Mon Tiki and the business we would have to erect around her to make her a going concern.

My majors in college were, in order: mathematics which was abandoned for music, which was abandoned for art. The big leg up I got was that throughout my meandering my parents paid for nearly all of my tuition, books, room and board. When I graduated, eight years after I started, I was all of $2,500 in debt; and I had acquired a trade (commercial photograph, learned in an apprenticeship, not in school) that allowed me to extinguish the debt and go back into debt 10 times that to open my own photography studio.

Last night my wife and I chatted with our eldest and plotted a course for the next several summers to make sure she accrues the sea-time she needs to qualify for her masters. I told her that our expectation of her is that she get her merchant mariners credential at the earliest possible date.

The the best of my recollection that’s the first time I’ve impressed upon her an expectation for the course her adult life takes, and I hope it’s the last time too. What matters to me is that she has the tools and resources to find her own way.

Below, the result of the morning’s drill-press work with Emily. 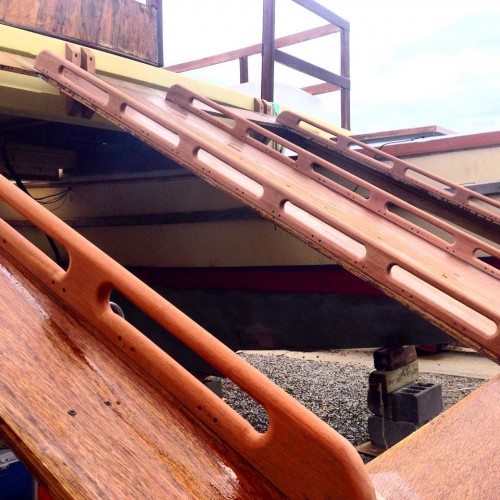