One of the interesting thing about Hillary Clinton’s totally expected announcement that she’s running for president is that her campaign is being called “Hillary for America.” Interesting less because of The West Wing connection and more because of the “Hillary” part.

It may not be exactly the same as the long list of celebrities known by their first names. But Hillary Clinton has become known simply as Hillary in bumper stickers and headlines, on Twitter and Facebook, around water coolers and in coffee shops.

Yet some Americans, mostly women, don’t think the former secretary of state, U.S. senator from New York and first lady should be called by just her first name.

“I think it’s pretty unjust,” said Monica Warek, 23, on a recent visit to Washington from New York City. “I think it shows the level of inequality that still exists in the workforce and just in general in society.”

As Clinton gets ready to kick off her campaign for the White House, some wonder whether calling a female candidate by her first name reinforces gender stereotypes.

Or does it make her seem more personable? 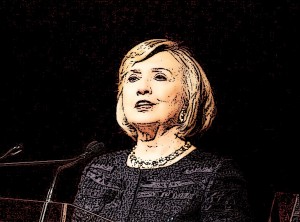 I’ve generally taken pains to avoid referring to her as just Hillary. I haven’t been 100%, but I refer to her as HRC quite a bit, or Clinton when I don’t think she will be confused with her husband. The husband thing is what makes it difficult, and useful, to consider referring to her by her first name. But I have resisted for a couple of reasons:

The first I more generally prefer not to use informal names when referring to politicians and presidents specifically. I almost never referred George W. Bush as W or Dubya, much less Shrub. It’s part of a general preference of formality when dealing with our leaders.

The second is sexism, both baseless accusations and out of genuine concern. The article deals more with #2. I don’t think I would refer to Hillary Rodham Clinton as Hillary for a sexist reason. Whatever thoughts I had about her position as a teammate of her husband’s has not been the case for some time. Her tenure as secretary of state has done a great deal towards positioning her less as a teammate and more as an independent actor. And though I prefer Romney to Mitt, I would say the latter. And perhaps most pertinently, I almost exclusively use Jeb to refer to John Ellis Bush. The pertinence of the last being that the first name is for the exact same reason: To avoid confusion with more prominent people with the same surname. 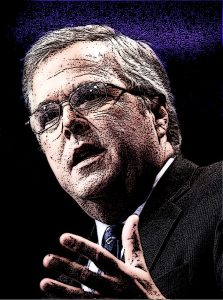 If Hillary Clinton wins the presidency, her tenure will make her “Clinton” throughout the same way that GWB became “Bush” throughout his. It’s the former president that gets the first-name treatment or some other qualifier. For Bill it will be Bill, for Georges it will be the H or the W. When GWB was president, I referred to his father as George H Bush, Bush the Elder, or the First Bush. Now that both are former presidents, I only rarely use Bush by itself – unless it’s completely obvious who I am referring to – and go with GWB or Bush the Younger.

Since the campaign is called Hillary for America – and since she presently does not hold office – I will generally stop trying as hard as I do to avoid referring to her as just Hillary until she takes office.