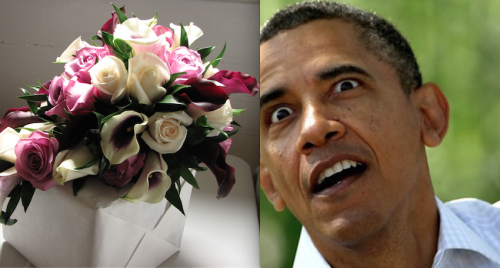 In what is obviously a false flag operation, Obama escorted the presidential florist out of the building. What we really have going on here is the latest WHITEhouse attempt to secretly infiltrate the last holdouts of Christians in the Florist industry, and root out all opposition for the DOLOMITE sisters and the New World Order of Flower Power. This operation will be centered in Portland OR. due to its lack of fluoridation (See, See!!!) For years a subversive trope has circled the globe, that fluoride has been sapping or vital essences, but nothing could be further from the truth. What is truly sapping our essence is Flowers, specifically arranged in the tastefull manner personified by Robert Mapel(!)thorp.

Despite his attempts to “whip” us into believing his photography was good for us, those of us with pure hearts could see through his SINsational pictures.
When Stanley Kubrick attempted to distract us with the obviously false tale of fluoridation sapping our essences, those of us who were not blinded by the “left” knew that Stanley had also been a photographer (in NEW YORK,) and from there the connections just fell into place. Like the lies about the “moon landing,” just too many things here are at play. One is Portland, home of the Mysterious R. (Tod) Kelly. Now, we know he says his middle name is Tod, but that is just to hide his love of WaterSports. The Watersports of de-fluoridation!

Now, my little SIN Haters, I am sure you are asking “how are florists and fluoridation connected?” As I stated above the need for devilish desperadoes to play with our emotions regarding what is healthy (and obviously PUBLIC HEALTH related) and what is not is firmly rooted in the DEATH PANALS that are now controlling the Government. This FACTION is controlled by the Lawyers Likko and Thompson, whom we all know are trying to get Judgeships on the secret flower courts, to spread their evil flower Death Panel agenda, which is to make all RIGHT thinking men and women to embrace the fiendish acts of the polygamy cult POLYPHONIC SPREE. And as we all know that this cult is led by the defrocked priest Erik Kain, who, as we all know, just assumed the 17th and final seat of the Illuminati.

Please help us get the message out before it’s too late: