I think it should be a requirement for being a police officer that you are not afraid of people with screwdrivers.

It is my understanding that police officers are more frightened of such threats than you and I.

Watch some of this video, with or without audio:

[Vik 10/2019: The above video was removed. Here is a different one covering some of the same material:]

The production values aren’t great, but the message is clear: policemen are sitting ducks from any reasonable distance, whether or not the attacker initially appears armed.

In a piece worth reading in its entirety, Policeone.com explains the 21-foot rule:

Originating from research by Salt Lake City trainer Dennis Tueller and popularized by the Street Survival Seminar and the seminal instructional video “Surviving Edged Weapons,” the “rule” states that in the time it takes the average officer to recognize a threat, draw his sidearm and fire 2 rounds at center mass, an average subject charging at the officer with a knife or other cutting or stabbing weapon can cover a distance of 21 feet.

It goes on to call this rule “arguably the most widely taught and commonly remembered element of edged-weapon defense.”

Also, some officers and trainers

have come to believe that the Rule means that a subject brandishing an edged weapon when positioned at any distance less than 21 feet from an officer can justifiably be shot.

For example, an article on the 21-Foot Rule in a highly respected [law enforcement] magazine states in its opening sentence that “a suspect armed with an edged weapon and within twenty-one feet of a police officer presents a deadly threat.” The “common knowledge” that “deadly force against him is justified” has long been “accepted in police and court circles,” the article continues.

Statements like that, Lewinski says, “have led officers to believe that no matter what position they’re in, even with their gun on target and their finger on the trigger, they are in extreme danger at 21 feet. They believe they don’t have a chance of surviving unless they preempt the suspect by shooting.[“]

Feel free to pause and let all that sink in.

Law enforcement is aware of the optics of killing people:

“If you shoot an edged-weapon offender before he is actually on you or at least within reaching distance, you need to anticipate being challenged on your decision by people both in and out of law enforcement who do not understand the sobering facts of action and reaction times,” says FSRC National Advisory Board member Bill Everett, an attorney, use-of-force trainer and former cop. “Someone is bound to say, ‘Hey, this guy was 10 feet away when he dropped and died. Why’d you have to shoot him when he was so far away from you?’”

And law enforcement knows what it has to say to justify their actions to those of us on the outside:

Be able to articulate why you felt yourself or other innocent party to be in “imminent or immediate life-threatening jeopardy and why the threat would have been substantially accentuated if you had delayed,” Everett advises. You need specifically to mention the first articulable motion that indicated the subject was about to attack and was beyond your ability to influence verbally.”

With all this in mind, the response of this officer make a lot more sense:

For those who didn’t watch, a young man dances behind a police officer without the officer’s knowledge. This angers the officer, and several others run over and aggressively interrogate him (verbally). Eventually, they push him onto the street, and he walks away.

When this first came out, a lot of people found the officers’ conduct excessive and inappropriate.

But if your officer trainer teaches you that anyone out there might be a ninja and will kill you if they get within 21 feet of you – even with your weapon in hand and finger on the trigger, how are you going to react when you find someone dancing directly behind you?

Like I said in an extended metaphor last year:

If a cobra finds you close to it, in violation of their law, it will assume that you are up to no good. By virtue of coming to its attention, you put yourself in the category of threat, both in the cobra’s personal experience and in the preceding however million years in which large animals came across small animals and nothing good happened for the small ones. 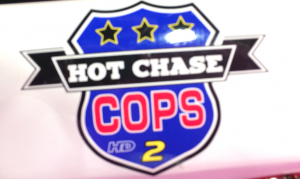 Yes, it turned out this kid was just dancing, but being unaware of your immediate surroundings is an obvious failure mode for a police officer.

None of this is to say that police officers should be shooting the mentally ill, pushing around dancing kids, or shooting large unarmed black men.

I do think, however, that we should stop being surprised when such things happen.

Addendum:
Above I argue that police officers are fearful, and perhaps justifiably fearful. I want to walk back this point a bit since it gives cover to officers in encounters like this one:

Dent opened his door and was dragged out of his Cadillac; almost immediately, [officer William] Melendez put him in a chokehold. Melendez then proceeded to deliver 16 blows to Dent’s temple.
…

Melendez, 46, claimed Dent was immediately combative and bit his forearm, though he would later testify there were no marks because he was wearing several layers of clothing. Dent denies the accusation. Melendez said the bite was enough reason to begin repeatedly punching Dent.

“I was afraid that I might contract something,” Melendez testified, earlier this month. “I needed to assure that Mr Dent would not do that again.”

My money says the bite was a fabrication. He knew he needed to “to mention the first articulable motion that indicated the subject was about to attack and was beyond [his] ability to influence verbally,” and he decided “he bit me” would work well enough. Even video is unlikely to be able to conclusively show that someone you were holding in a chokehold never got his mouth close to you.