Is It Funny and/or Offensive?

I freelance for a news and opinion website. Coincidentally, a couple of days before Trevor Noah was picked to be the new host of The Daily Show, I pitched a story to my editor and then withdrew it. The story was this: Jon Stewart has a history of making ableist comments. I have a heightened awareness of this, perhaps, because one of my sons has intellectual and developmental disabilities.

Most recently, here was a sight gag he used to describe Fox News having a fit of self-congratulation. I will note that after I posted something on Facebook about it, two people wrote to tell me that they thought that “special” had no connotations other than being positive, and that Stewart wasn’t making a reference to intellectual disability. Between Special Olympics and special education, I beg to differ. 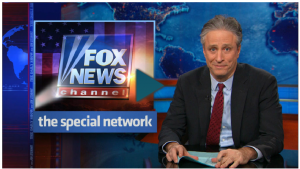 But to see whether I was being unfair to Stewart, I looked through his history. He uses the word “retarded” ALL the time, to this day, and then jokes about how he shouldn’t use it. He says f**ktard; he called Dick Cheney a “quailtard.” And then there’s this lovely bit from 2002. That may be from a long time ago, but it’s really, truly, deeply offensive – and it was after he was already The Daily Show host and old enough to know better. He is not using the word “retarded” as a metaphor, but is actually insulting people with intellectual disability.

His “Rally to Restore Sanity and/or Fear” with Colbert has also ruffled feathers in the disability community. Using “insane” to mean “bad” is still totally amazingly acceptable, even in progressive activist circles.

In 2008, Stewart held a televised fundraiser for Autism Speaks. So, disability activists should be grateful, right? Well, it may indicate his heart is in the right place.

On the other hand, Autism Speaks, run almost entirely by parents and caregivers of people with autism, is a charity that is controversial, for financial as well philosophical reasons, among people who actually have autism. Stewart later interviewed Naomi Watts and discussed the fundraiser. She mentioned that they raised money for autism. He laughed and corrected her, “It’s against autism, it’s not really money for autism. Obviously, that would be a cause where you would say, ‘that seems cruel.'”

This may seem innocuous to you. It may seem obvious that autism is a bad thing. But to many people with autism, their autism is so bound up with their identity, that if you cured autism, they would no longer be themselves. (I wrote about this non-pseudonymously here.) What they would hear him saying is, “It’s cruel to wish that there are people like you in the world.” Now on one hand, most neurotypical folk aren’t really aware that this is how it would come across, so perhaps Stewart should be absolved. On the other hand, ought not one research the charity and issue for which one is raising money?

Anyhow, even setting the Naomi Watts and Autism Speaks stuff aside, his comments on intellectual disability are pretty bad. I withdrew the pitch though, because I didn’t know how to describe it without being a humorless schoolmarm, and I didn’t want to get in a back-and-forth about humor v. offensiveness. Basically, I didn’t want to be a PC scold. I thought I’d write about it here, where I can more easily present a nuanced view.

I posted my thoughts instead on Twitter and Facebook, to relative crickets. No one cared about Jon Stewart’s ableism, except a couple of people who always care about ableism and one or two other people who kindly responded.

Then Trevor Noah comes along and makes comments about Jewish folks and ignorant Americans and women, particularly “fat chicks.” As it happens, I am a Jew and an American. As it also happens, I used, lo these many years ago, to be a fat chick. Recently I put back on some of the weight (not all!) that I’m working to get off again. (For the record, Noah is, ahem, wrong about Jewish girls.)

No one has really acknowledged Stewart’s comments, but Noah’s comments have raised a lot of controversy. Some people are offended, others are scoffing at those who could possibly be offended because it’s just a joke. People are also criticizing those who are offended because, as I just did with Stewart, someone cherry-picked a few offensive comments out of many innocuous ones.

Here are some thoughts, in no particular order:

1) These references to “retarded” made me see Stewart in a different light – especially the moments where he joked about how he knew he shouldn’t be saying “retarded,” and MOST especially in that 2002 video. I will never be able to laugh with him the same way again.

2) I don’t want everyone to have to worry about offending everyone. For example, I thought the initial “dongle-gate” calling out, with photo, was too harsh, and it’s a tragedy that the guy lost his job over that. (Importantly, the backlash against the caller was way too harsh as well.) However, the fact remains that Stewart and Noah each said those things that did offend me, and that inescapably affects how I view them. Negatively.

3) I understand the comments are cherry-picked. I’ve said goofy things on Twitter, I’m sure. But (and feel free to comb through my tweets, people with absolutely nothing better to do – I’m @epicciuto) I’m also pretty sure that none of them rise remotely to the level of Noah’s. The violent ones are truly disturbing. For some reason, I am currently unable to upload images of his tweets. But here are some of the more offensive ones:

“Behind every successful Rap Billionaire is a double as rich Jewish man #BeatsByDreidel.”

“Almost bumped a Jewish kid crossing the road. He didn’t look b4 crossing but I still would have felt so bad in my german car.”

“Originally when men proposed they went down on one knee so if the woman said no they were in the perfect uppercut position.”

That last one especially? Yikes.

4) None of the jokes, with the exception of quailtard, were actually at all funny. If you’re going to offend, make it worthwhile.

5) I would not personally boycott either Stewart or Noah due to the comments. Nor do I think they are fire-able offenses. However, they make me far less inclined to seek out The Daily Show. You don’t need to be insensitive to be funny. See: John Oliver. With Stewart and Noah, from here forward, if I watch the show and laugh, I will feel like I’m laughing along with people who have a bit of the class bully in them.

6) Relatedly, Stewart is unquestionably punching down. Noah is with his sexist tweets (despite his reference to literally punching up!) – I think also with his anti-Semitic tweets, but I suppose that is more arguable. Oliver punches up, always. Maybe sideways.

In sum, I don’t think all comedy mustn’t offend. I don’t think it must be boycotted. I can even roll my eyes, sometimes, at people who are too quick to offend. Yet sometimes I get offended. I have gotten offended. And I won’t be enjoying The Daily Show, with its once and future hosts, as much as I once did.