The Exit Poll Blackout Strikes Back

Philip Bump and the Washington Post have some egg on their face after doing a “statistical analysis” that demonstrated what the electoral map would look like with 100% turnout. What they got were two maps, one that looked like this:

On the left, note the south and northeast. On the right, note the entire country.

Which was, evidently, not enough to raise enough alarm bells to reconsider the project (instead they just note the flaw and move on). Vox immediately pounced:

The problem with that is that looking at how women voted nationally isn’t a good way to project how women in conservative Kentucky will vote. Similarly, how white people voted nationally doesn’t tell you all that much about white voters in liberal Vermont, as Josh Barro argued on Twitter.

That’s why the Post’s map based on racial projections comes up with the odd result of the South going Democratic and much of New England going Republican — because they had no individual exit poll data for those states. Instead, they assumed that white voters in each of them, under full turnout, would vote like white voters did nationally (59 percent for Mitt Romney). 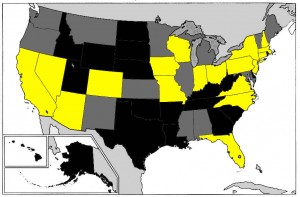 This relates to something I criticized at the time, which was a virtual blackout in red state polling. At the time I wrote the piece, they were going to include 31 states, and almost all of the states they were excluding were red ones. And there was no justification for the skew (not urban/rural, not “competitive senate races” not homogenous/diverse… nothing). I guess at some point they made the decision to reduce the number of states, eliminating states like Vermont and perhaps adding a little more method to the madness (though still not a methodology that can be pinned down).

Even if they got rid of the skew (which they didn’t quite), valuable information was lost. Given the strain that news organizations are under, it’s perhaps not reasonable to expect them to stand out voting booths in Rhode Island or South Dakota, but it would be really nice if someone one. These elections only happen once every four years. And the Washington Post would save itself some embarassment.

The Washington Post did go back and look at the data from 2004, though, from back in the halcyon days when all states were counted. The results were actually a bit unexpected, as (to whatever extent the data reveals anything) Bush might have done better in 2004 than he did, potentially flipping Pennsylvania and Wisconsin. Only a bit unexpected, though, as Bush underperformed in the electoral college (which was closer than the national popular vote). It should also be added that the 2004 vote count is less useful than today, due to various demographic changes. Which is why having the 2012 data would be nice.