The Lament for Ur

The Near East is a place of lamentations, even today. A difficult climate to farm (although more so in recent centuries), an open plain without natural defenses from attack, the Mesopotamian area in particular was conquered and invaded throughout much of its history and fear and trembling are still written into the cultural character.

A particularly hypnotic and powerful piece on the outcome of war and invasion, the fragmentary text we call the “Lament for the city of Ur” evokes the later Book of Lamentations in the Old Testament, but is more frightening because it’s not as if man turned away from God here; instead, the gods just don’t care about us for the most part. And even our local protector gods have no say against fate.

The piece was written around the time that the III Dynasty of Ur fell to invasion by the Elamites from the east (roughly 2000 BCE). It may have been the Ur Kasdim mentioned in Genesis as the birthplace of the Hebrew patriarch Abraham. It was certainly a flourishing, fertile, and wealthy city. As such, it was ripe for conquest. 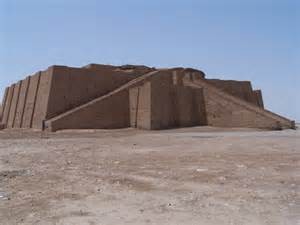 Today, Ur is remembered mainly for the large stepped pyramid-like structure in its center; The great Ziggurat of Ur was built as a sort of administrative center and staircase to unite the plains of sky and earth and give gifts to the moon god Nanna. It was mostly rebuilt by the Neo-Babylonian king Nabonidus, known as the “first archaeologist” for his keen interest in the ruins of old Sumeria. Its facade and stairs were rebuilt by Saddam Hussein, that lover of the monumental buildings of state rule. When US troops climbed the Ziggurat, they were just the most recent invading army to do so.

The text has been pieced together to begin (as it likely did) with an eerie section that repeats variations on the refrain “He has abandoned his cow-pen and has let the breezes haunt his sheepfold” like an incantation- an image of desolation in a city whose herds of people have fled leaving the haunting noise of wind winding through empty dwellings. Understand that, at the time, Ur was perhaps the largest city on earth and it was brought to this.

Not just the people, but the gods have abandoned the city to ruin. The repetition in the first sections is hypnotic and musical, a dirge to the “righteous destroyed city”. The author names the gods who weep, repeating “the lament is bitter, the lament made for you.” The lament hangs most heavily, we are told, on Ningal, wife of the moon god, Nanna, who has appealed to the council of gods to spare her city from a terrible conflagration that will destroy Ur. In a powerful passage that reminds me, maybe strangely, of the despair of King Lear, she recalls, “Because the hand of the storm appeared above, I screamed and cried to it “Return, O storm, to the plain”. The storm’s breast did not rise.” The blending of storm and war imagery permeates the poem.

We are fortunate enough to have a soundtrack of sorts by the Czech composer Luboš Fišer. This piece perfectly suits the Lament. I would recommend reading the text while it plays:

Luboš Fišer - The Lament over the ruined town of Ur

Despite Ningal’s desperate appeals, the ruling of the council is final. The Dynasty had reigned to its appointed end. The storm whips through the city, destroying all in its path. There is no way to hold back the winds or fate itself. “Her city has been destroyed in her presence, her powers have been alienated from her.”

The poet skillfully develops the depiction of a horrible tempest and then intercuts horrifying imagery of the more human military massacre: “The heads of its men slain by the axe were not covered with a cloth. Like a gazelle caught in a trap, their mouths bit the dust. Men struck down by the spear were not bound with bandages. As if in the place where their mothers had laboured, they lay in their own blood.” In cinematic terms, its as if we have been shown a gale-force hurricane that darkens everything and, when it has passed, we see the victims of murder by passing strangers.

Not only has the city been ravaged; it’s been estranged and made foreign. Ningal mourns that it is no longer the same city or her home. “Woe is me, where can I sit, where can I stand?… I am sitting as if a stranger with head high in a strange city.” She, like her people, is homeless in the double sense of having no shelter and her home no longer existing on the earth. She has literally been alienated from this land.

In the most powerful passages of the poem, she is asked repeatedly “How do you exist?” and “How long will this last?” the questions anyone who has been through deep suffering and trauma has asked themselves, and certainly any people who have been devastated by war and invasion.

Every invading army should reflect on these passages before unleashing that storm or inspiring future lamentations.

[Next time: The Code of Hammurabi.]