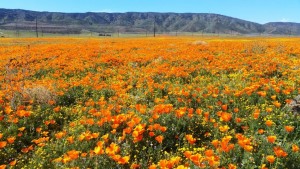 I’m entering a fairly busy period, with many professional demands on my time. So I’ve had to find things to do for relaxation lest the stress of working get to me. To that end, for the past several months my wife and I have enjoyed the early spring with daily, or on the weekends twice-daily, walks about the area or occasionally hikes in the mountains and parks throughout northern Los Angeles County. 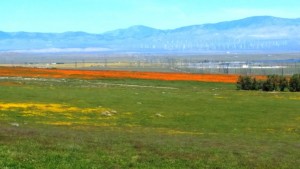 As it turns out, we’ve had an almost “normal” amount of rainfall this winter — winter is the wet season in southern California — and while it wasn’t nearly enough to break our drought, it has been enough to produce a nice crop of wildflowers up here in the desert. And when I say “wildflowers,” in my part of the world a discussion about nature blooming is incomplete without mention of the California Golden Poppy. 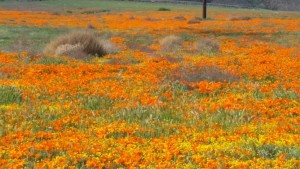 For about two weeks, after the rains pretty much stop, the hillsides are green and flowers bloom and this part of the world is pretty darn good-looking. Most years, that is, and this year has been one of them. 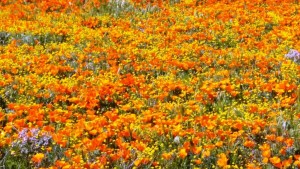 So the wife and I have taken time on the weekends to go to locations around the area to enjoy the poppies and other wildflowers while they last. Spaced throughout this post you’ll find some of the telephone snapshots I’ve created on these jaunts and perambulations. All the photos in the post should give you pop-up magnification on a click. As I say, these are snapshots rather than compositions; I don’t pretend to be a professional photographer. 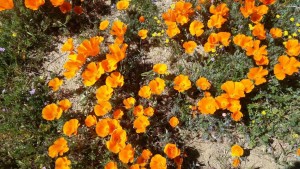 The dominant subject matter, of course, is the California Golden Poppy. Most of the time it looks a little bit like a dark rosemary sprout, although the leaves are obviously more delicate. When it blooms, you get that wonderful golden-orange color. And as you can see, it blooms densely and can grow to large patches. From even a moderate distance it seems to paint the side of a field a bright color. 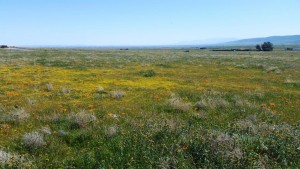 This year like most, goldfields bloom concurrently with the poppies. They spread their bright yellow color across the desert floor in those areas where they gain dominance. Unfortunately I must report that when they bloom, they seem to emit an acrid, almost oily smell. While not unendurable, it isn’t pleasant, either. The poppies have little detectable scent. 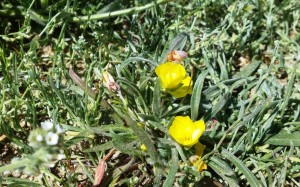 Now some of you are freaking out to see so many poppies of such a distinctive color. In particular, European readers likely are familiar with bright red poppies. Well, I don’t know that outside of gardens we have any red poppies in California; I’ve never seen them anywhere growing wild. We do, however, have some variant strains of the orange poppy; on a hike yesterday we came across a few specimens of poppies that were yellow. 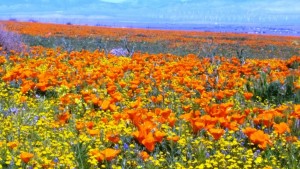 Normally, we get a nice crop of purple and blue lupines, but for whatever reason not many of those this year. There are much smaller flowers that grow a pale purple, and sporadic specimens of very small blue and white flowers. 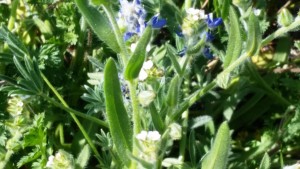 I don’t know their names. It takes getting down real close to seeing the flowers’ structure, although from standing distance you can appreciate the swath of color they lend to the desert field. 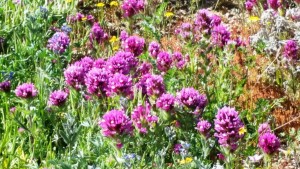 A bit more rare is an imperial purple flower, which I believe is called “locoweed.” (Not a hard name to remember.) At first, I thought these might be the flowers of the Russian Thistle, an invasive species which grows up around here to become the infamous and annoying tumbleweeds for which the American west is famous. But those look quite different than locoweed. 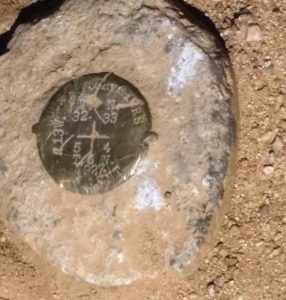 In one of our more recent jaunts we came right across a monument, so if you’re capable of reading land surveying notation, you can find precisely where we were during one of these walks. We also came across an alarming line in the sand — don’t worry, it’s obviously faked. While the real critter would not have made nearly so deep a track as this,

I thought it an effective reminder that we aren’t alone out there in the fields and other creatures, hunting for something other than pretty snapshots and pleasant memories, might not appreciate the company. 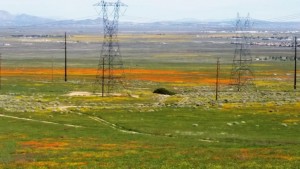 All of these photo snapshots were taken within ten miles of my home. The densest fields of poppies were found not in the state park at the extreme end of that range, but rather clustered around some fields along one of the trunks of power lines transferring electricity from the wind farms and solar power fields to the massive city to our south.

Next week the flowers might be gone, so I shall enjoy them while I can. If you’re in southern California, hurry up to come visit us if you want to enjoy them too.

Tags: Californiadesertgoldfieldslocoweedlupinespoppiesspringtimethistleswhat it looks like when the desert blooms