[A1] Vice writes about how attempts to Uberize and Airbnb New Orleans is running into a cultural wall in New Orleans. Notably, a friend of mine who lives there and is a free marketeer in most respect hates Airbnb.

[A2] Wallst247 has a list of the worst states for black Americans, while Kotkin has a list of the best cities. The first list definitely not the list you’d expect (one southern state listed), and I’m not sure about the criteria, but I’m also not sure there is any perfect set of criteria.

[A3] More to Buffalo, live like kings I tell ya.

[A4] People look at me sideways when I mention Kansas and Utah as places with tech job opportunities, but there’s a there there, and as Silicon Valley becomes more crowded, I expect it to become more popular among mid-level employees with families. (Also: Austin!)

[A5] I’m still trying to get a handle on the move in Oklahoma to change the marriage set-up to get ahead of the increasingly likely legalization of same-sex marriage. Reason initially praised it for legalizing SSM (though corrected that it would not), while Progressive Secular Humanist says that it would ban atheists from getting married, which doesn’t hold up to the slightest bit of scrutiny. Section 7.B.4.E seems to effectively replace the county clerk with a notary public, for purposes of certifying marriage. The only potential issue I see that isn’t strictly ideological, is if other states don’t recognize these marriages, and I don’t see any reason why they wouldn’t any more than a state not accepting Hawaii’s short-form birth certificate. (Links via MRS and Saul)

[C1] China has opened a Hogwarts! For art students.

[C2] Details have been leaked about a new Chinese air craft carrier, but Ryan Faith says they raise more questions than they answer.

[C3] I was actually discussing this with someone recently, but if you want your kid to get ahead, don’t teach them Mandarin but instead plain ole Spanish.

[C4] The “ghost city” of Changzhous” actually has about 4.5 million people,.

[P1] Privilege I can believe in: The privilege of being good-looking.

[P2] The newest privilege is loudly denouncing your privilege. It’s not as glib as it sounds. Those who are most likely to denounce it are those who are sufficiently safe from the effects of having the privileges associated with race, gender, sexual orientation, and so on, on account of their wealth and social position apart from these things.

[P3] Timothy Burke on the trouble with privilege.

[R1] Church attendance can effect commitment to one’s job. Interestingly, it seems to suggest that perhaps prosperity gospel is actually kind of a good thing.

[R2] Arthur Books argues that the Mormons have figured out the trick to being virtuous.

[R3] The story of Aimee Semple McPherson, a glamorous evangelical preacher in the 20’s who plum disappeared.

[E1] As Apple releases its $10,000 variant, Android watches have not taken off as Google might have hoped. I’m pondering getting a Pebble.

[E2] ArsTechnica tests a $35 Firefox OS phone. It’s functional, but crikey I think Americans are throwing away better phones than this every day.

[E3] Apple deleted unauthorized music from your iPod? I didn’t know that. Uncool.

[E4] I have some old smartphones sitting around. If this pans out, I may be able to combine them into a computer.

[MHL1] Windell Middlebrooks, who played the the iconic MHL delivery guy in a series of commercials, died at 36 of unspecified causes. There aren’t many pitchmen that I can say are great, but Middlebrooks was one of them. Here is a sample commercial:

[MHL3] And here’s a link to him is on Late, Late Night with Craig Ferguson. My parents don’t watch Ferguson, or Letterman who comes before him, but they’d DVR just about every appearance he made. And then save it for me next time I come home. We love the guy that much. In fact, last time they were here, we were talking about some commercials in BCS season and saying “Not as good as Miller High Life guy.” 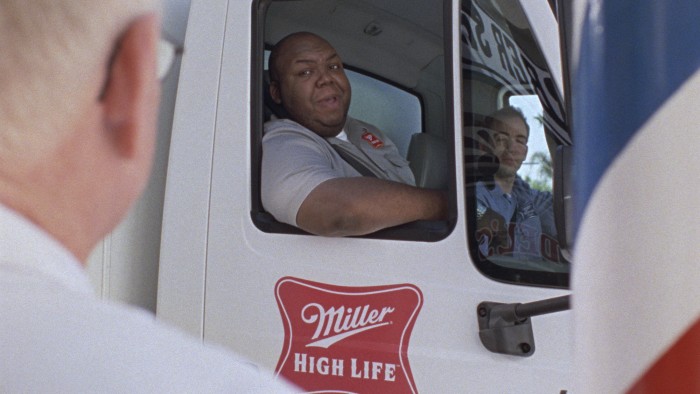