The Epic of Gilgamesh: Sex, Violence, and Death

[Note: This is a somewhat revised and expanded version of a post from 2010. This continues my “blogging the canon” of Bronze Age literature. A decent translation of the Epic of Gilgamesh is here.]

In Mesopotamia, the living was not easy. Here’s how a recent book on the ancient Mediterranean explains:

Although lover Mesopotamia itself received very little rainfall, the upper reaches of the rivers were subject to very heavy rain, which could pour down the rivers and flood the cities downstream without any warning; a Mesopotamian curse called for ‘flood waters surging down on an enemy land’. In addition, Mesopotamians never knew when they would be raided by mountain dwellers from the north or desert peoples from the south. As a result, life in Mesopotamia was insecure and full of uncertainties and the Sumerians adopted a primarily pessimistic outlook on life. 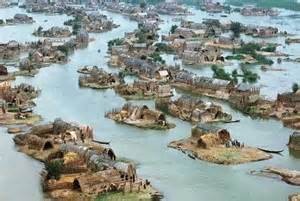 This is a fairly common interpretation and we have seen some evidence for it in the Enuma Elish, in which humans were created solely to serve violent and contrary gods. However, it is not entirely unique. In fact, at first glance, the Mesopotamians lived in a world that reminds one of the ancient Greeks. There is the same interaction with a plethora of gods who guide men, but often remain indifferent to them. There is the same acceptance of hierarchy, kingship, and the priestly class as the natural social order and analogues to the Divine order. There is the same surprising acceptance of combat and violence, and a taste for heroics. And there is the same natural order that seems both naively straightforward and surprisingly cruel.

Such is the case with The Epic of Gilgamesh, a story that was first recorded in Sumerian before 2,000 BC and in the most familiar Akkadian version about 1,000 years later, and which records the story of a most likely real King from around 2600 BCE. And what a King! King Gilgamesh of Uruk was a huge and beautiful warrior who led the construction of the city walls; no small feat in Ancient Mesopotamia. According to the story, he was semi-divine. We can assume he also conscripted labor from the community and he soon earned a reputation for tyranny among his people. He was especially known for exploiting the King’s right to sex with all subordinate women. “Gilgamesh does not leave a daughter to [her family] nor the maiden to the warrior, nor the wife to her husband.” (It’s good to be the King of Ur, apparently) In desperation, they appealed to the gods to get him off their back and their wives. This, then, is an ancient story about good government, as well as a lesson for humanity on how to live in the world. It suggests that the key to being both a good king and a good man is to have a sense of limits, especially sexual. All political leaders should read it! 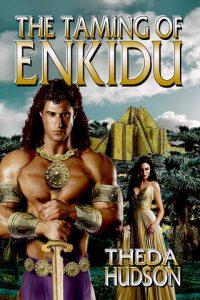 This is a real thing.

In order to occupy him, the goddess Aruru decided to create a companion for Gilgamesh; from clay, she sculpted the wild-man Enkidu. Also huge and covered with hair, Enkidu lives in the woods and represents the first narrative of wild humanity being tamed by civilization. In this case, he’s civilized by the harlot Shamat who risks life and limb to couple with him, as described in the unforgettable: “And Shamhat disclosed her womb, uncovered her nakedness, and let him enjoy her favours.” They have sex for seven days and seven nights and Enkidu is left physically weakened but has been given the gift of reason. Sex brings enlightenment and sexual woman civilizes the savage beast!

Similarly, friendship makes Gilgamesh a better king. Enkidu and Gilgamesh don’t exactly hit it off at first; Enkidu is shocked to hear that Gilgamesh has been crashing his citizens’ wedding parties to shtup the bride before the groom, and chivalrously tries to fight him. They clash, but as soon as it is established that Gilgamesh is the alpha male, they become friends. Like Patroclus and Achilles, the two warriors develop an intense comradeship greater than any other relationship in the story. Harlots aside, Gilgamesh and Enkidu are emotionally devoted to each other.

The two heroes have great adventures together, defeating the ogre of the cedar woods, Humbaba, and slaying the Bull of Heaven, sent when Gilgamesh rejected the sexual advances of the Goddess Ishtar. As punishment for this, the gods kill Enkidu, taking him to a bleak Netherworld. The gods generally live askance to humanity in the story, occupying palace-like temples and being treated as royalty. Many scholars believe that the gods were really thought to be living in the temples and were regularly offered food, a tradition that survived in Mesopotamia until the coming of Islam. But the gods play less of a role in this story than they would in religious scriptures, or in the Greek myths. They seem more like bystanders than central figures.

Instead of a story about gods, the epic is more the story of human mortality and weakness. Gilgamesh is devastated by the death of Enkidu and rails against the unfairness of it all. Anyone who has lost a loved one knows how unjust and inexplicable death is, how permanent and unyielding. It never stops. The real beauty of the story, and probably why it’s endured so long, is that, for all of its strangeness and its extinct gods and goddesses, it’s basically a story of friendship, love, and loss. Gilgamesh stays with his dead friend, grieving bitterly, until the maggots come forth from the body. Then, he sets out to find a way out of dying.

Gilgamesh sets out to find the legendary Utnapishtim and his wife, a couple who survived the Great Flood by building an ark and taking aboard animals of every species, before finally landing on the Mountain of Nimush and waiting until a bird returned with sign of dry land; in exchange, the gods granted immortality. The similarities to the Biblical story of Noah are unmissable. It seems most likely that variations of the story existed for centuries, most likely referring to a regional flood. There are also similarities to the Odyssey; for example, Gilgamesh sails to the edge of the world to cross into the underworld like Odysseus. Greek scholar Ioannis Kakridis has argued, convincingly I think, that Gilgamesh was also a source for Homer’s epic.

Gilgamesh fails at every chance he gets to find immortality; a doomed quest for men. This lesson is charmingly summed up by a tavern-keeper who accompanies Gilgamesh on the quest, but tells him that only the gods can live forever; so instead of following this insane quest, “let your belly be full, enjoy yourself always by day and by night! Make merry each day, dance and play by night! Gaze on the child who holds your hand, let your wife enjoy your repeated embrace!” It’s not bad advice.

It’s hard not to sympathize with Gilgamesh. Animals fear pain, but cannot conceptualize that they will one day cease to exist. Only humans live with this steady knowing until the day they cease to know. There is something about mortality that seems very unfair- both random & meaningless, and completely egalitarian in its reach. Gilgamesh eventually realizes that he will not be granted immortality and resigns himself to his eventual demise. In the end, I think it is the experience of loving another person and coming to terms with the limits of human life that make him a good king. As the story ends, we are reminded that he built the walls of Uruk, a work that will live on long after him.

{See Also: Debate Between Bird and Fish, the Enuma Elish.}

Up next: The Code of Hammurabi.