From Power to Explorer 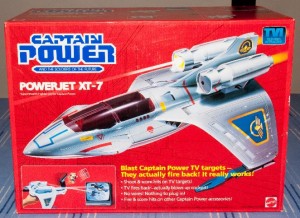 For those of you who may recall, Captain Power was a TV show slash game back i the 80’s. Depending on who you asked, it either rocked or sucked. I can’t speak to how good the TV show was because I never saw it. I did have the game, however, along with a VHS cassette.

The game primarily consisted of pointing at a screen and trying to hit bright red parts of the opposing fighter planes. There was also yellow, and if you didn’t “dodge” it by turning your plane-gun away, you’d get hit. Get hit enough times, and the plane ejects.

I didn’t know what to expect when I asked for it, but I should have expected what I got even if I was young. Of course you wouldn’t be able to maneuver. it was a VHS tape! and whether you were doing anything or not, the game would go on and (on the VHS anyway) you would win. Your participation wasn’t actually necessary. 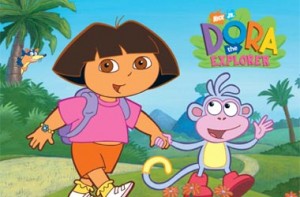 I have a bit of a flashback with that when Lain watches Dora the Explorer. I give myself two episodes of “Dora time” a day, where she watches the show while I get various things done in absolute piece.

For those unfamiliar, the formula for Dora episodes is that Dora and Boots have to go somewhere. They consult a map, avoid Swiper the Fox who wants to steal something, and so on. Dora is always asking “you” (the viewer) for help. It’s interactive as far as that goes. Lain participates sometimes. It’s pretty great.

At some point, though, Lain is going to figure out that her participation is not necessary. Dora will get where she wants to go with or without her help.