Family Guy and the Banality of Evil 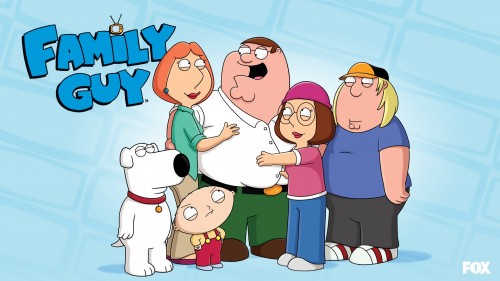 This post is about “Family Guy,” and I promise I’ll get there. But first I’ll start with a long passage from George Orwell’s 1984 (hat tip, Eric Blair). Toward the beginning of the novel, the protagonist, Winston Smith, writes the following in his diary [bold added by me]:

April 4th, 1984. Last night to the flicks. All war films. One very good one of a ship full of refugees being bombed somewhere in the Mediterranean. Audience much amused by shots of a great huge fat man trying to swim away with a helicopter after him, first you saw him wallowing along in the water like a porpoise, then you saw him through the helicopters gunsights, then he was full of holes and the sea round him turned pink and he sank as suddenly as though the holes had let in the water, audience shouting with laughter when he sank. then you saw a lifeboat full of children with a helicopter hovering over it. there was a middle-aged woman might have been a jewess sitting up in the bow with a little boy about three years old in her arms. little boy screaming with fright and hiding his head between her breasts as if he was trying to burrow right into her and the woman putting her arms round him and comforting him although she was blue with fright herself, all the time covering him up as much as possible as if she thought her arms could keep the bullets off him. then the helicopter planted a 20 kilo bomb in among them terrific flash and the boat went all to matchwood. then there was a wonderful shot of a child’s arm going up up up right up into the air a helicopter with a camera in its nose must have followed it up and there was a lot of applause from the party seats but a woman down in the prole part of the house suddenly started kicking up a fuss and shouting they didnt oughter of showed it not in front of kids they didnt it aint right not in front of kids it aint until the police turned her turned her out i dont suppose anything happened to her nobody cares what the proles say typical prole reaction they never

Now back to “Family Guy.” I’m not sure it’s okay to watch the show. I like it. I don’t watch it much anymore, but that’s mostly because it’s on at inconvenient times for me. But it’s hard to know whether I should laugh at the humor.

Or some of the humor. Many of its jokes are pretty innocent. Take the scene where an errant golf ball crashes through a china shop and destroys all the porcelain vases and other breakable things. A bull, who had been in the china shop innocently browsing the wares, now faces blame from the owner who was in a back room and didn’t see what caused all the damage. (Sorry, I can’t seem to find a YouTube link to it, but it’s funnier if you watch it than if you read my description.) Some of the humor also strikes me as decent social commentary. When Peter meets the crows from Dumbo and makes his comment about “good ole fashioned family racism” [not really offensive, but probably not safe for work], it’s hard to deny he’s on to something. There are also a lot of fart jokes that aren’t really my thing but are harmless.

But some humor crosses the line. Take the scene where a barbershop quartet makes fun of an AIDS patient, or the repeated jokes about and abuse toward Meg, or the neighborhood pedophile character. Everyone’s mileage varies and the line-crossing jokes can sometimes be argued to have a point beyond harming others for the sake of laughter. Examples [not safe for work]: here, here, and here.

Finding the point—finding the justification for the humor—requires us to rely on irony. We don’t really think that it’s appropriate to make fun of someone with a terminal illness. We don’t really think bullying a teenage girl is a good thing to do. We don’t really find pedophilia funny. Instead, we (by which I mean, “me and others,” because this is something I do) say it’s so bad it’s funny. In fact, it’s funny precisely because it’s so bad, because we would never do those things or condone them being done outside movies or tv, or at least outside the cartoon world. It’s the type of thing we laugh at everyday. We might also say that “Family Guy” is “an equal opportunity lampooner.” I have problems with that argument, but as a general argument and in the particular case of “Family Guy.”

But how can we be sure that our laughter or enjoyment is not just another way of performing cruelty? It’s not right to make fun of people with terminal illnesses, but there was a time not too long ago when it was okay or at least not beyond the pale in at least some otherwise respectable circles to make jokes about “the gay disease.” Bullying isn’t funny except when it is. How many times have I made a comment on the internet that I believed to be funny but was probably on some level bullying? (Answer, probably at least a few.) Pedophilia and other forms of sexual abuse isn’t funny, but I suspect a goodly number of people here have occasionally laughed at “prison rape” jokes or whatnot.

Most people who make such jokes or find troublesome things to be funny aren’t sociopaths. But I’m not so sure that sociopaths don’t make such jokes. And while it’s a fallacy to say that because Socrates is a man, therefore all men are Socrates, the family resemblance between “Family Guy” humor and what cruel people do and probably laugh about is disconcerting to me. Think of the bullies you may have known or people who have punched down (or even up) at you and the jokes they tell. I’m not so sure they don’t tell themselves they’re not laughing at the person or the disability or the racial or sexual identity. I wouldn’t be surprised if they say instead that they’re just laughing at the irony of it all.

I began this post with the Orwell quotation for a reason. What Winston Smith observed at the movie theater is what I’m suggesting happens with “Family Guy.” What entertainment we consume and partake in is also part of what we put out there and might very well contribute to a violent project. Think of the history of blackface minstrel shows, which arose during slavery and flourished during Jim Crow.

The analogy is not perfect. I wouldn’t be surprised if in Smith’s dystopic world, people are required to watch such movies whereas in our real world we have a choice whether or not to watch “Family Guy.” And Jim Crow has been dismantled, at least formally. There’s also the idea that as consumers of entertainment we are detached. We suspend disbelief. And in so doing we are, as I noted above, “laughing at the irony of it all.”

Am I just being puritanical? Not in the Menckenian sense of the word. I’m not tsk-tsk’ing. I’m not arguing that “Family Guy” should be banned. I’m not endorsing a letter-writing campaign or boycott to get it off the air. I’m not even urging anyone else not to watch it. I’ll probably watch it or reruns someday in the future.

Maybe I am being puritan in another sense, though. I believe that what we–by which, again, I mean “you and I”–perform and do is part of who we are and shapes what we become. I resist calling that “puritanism” because doing so seems to imply that only puritans care about such things.

And we should consider what we laugh at. It’s not always an easy call. The “prole” in Smith’s passage might be on to something.