What’s a POTUS to do? 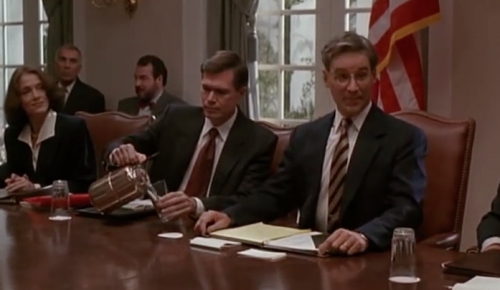 There’s some good discussion going on over in Will’s post that asks the question, how important is it that a POTUS candidate have a college degree?

It’s an interesting enough question on its surface.  Comparing the positions of CEO of Microsoft and Leader of the Free World™,  Will notes that

after becoming an entrepreneur, Bill Gates did represent a gargantuan enterprise. Nobody thought that Microsoft’s Board ought to have replaced him so that their company could be represented by someone with a degree… I would argue that the presidency falls into this category. What is required to be president overwhelmingly occurs after college. There is no “President of the United States” degree offered. Its training is inherently on-the-job. So we look towards as equivalent experience as we can find. They have experience running a state, as an executive in the private sector, or serving at the highest echelons of the federal government. And that’s what ultimately matters.

I have little argument with that, except for the rather obvious rejoinder that it will mean jack-squat in the voting booth.  There are a lot of people out there that would approve of their company hiring Bill Gates that would balk at voting for someone with only a high school degree for President.  There are lots of interesting arguments for whether or not that college degree is important, and as I said above they are being discussed over on Will’s side of the pool.

But as I was reading through Will’s threads, it occurred to me that the question of Scott Walker’s education actually masks a larger and more foundational problem with the American Presidency, which is this:

What do we actually want and expect a President to do?

To be clear, I’m not asking about how a POTUS candidate should answer litmus test questions. Nor am I asking how much power the Constitution does or does not grant our Chief Executive. I’m asking something more far more basic: At a day-to-day, have-Janet-in-HR-send-you-the-offical-job-description level, what do we mean in 2015 when we say we think someone will or won’t make a good president?  Because the more I think about it, the more I’m not sure we really know.

To illustrate my point, let’s take Will’s education question and apply it to the remaining two Big Branches. Unless Burt wishes to inform me otherwise, there is no educational qualification spelled out in the Constitution for Supreme Court or Congress. Despite this, however, if tomorrow Justice Ginsberg were to drop dead and President Obama were to nominate Ken from Marketing to replace her — because come on people, Ken’s numbers in the fourth quarter were fantastic, and Ken’s the kind of go-get-’em personality that gets the job done, and gosh darn it, people just plain love working for Ken — there’s not a man or woman in America* that wouldn’t strongly object and demand a candidate with a law degree.  Similarly, if we were to read this November that a neighborhood in San Antonio elected to Congress a smart, self-educated woman who never finished high school, we’d all be pretty cool with that.

I would argue that this is largely because we all know what the day-to-day job of a congressperson or a Supreme Court justice is.  Jaybird and I might disagree about a SCOTUS decision, but we both agree that the darkly frocked nine were supposed to decide upon the Constitutionality of the case.  Likewise, we all agree that a Congressperson’s job is to pass legislation beneficial to the good of the people.  That we may disagree with what is and isn’t in the people’s best interest does not change the fact that we have a solid consensus of what Congress does.  You can even push this argument all the way to Bill Gates.  Microsoft shareholders know exactly what Bill Gates’s job is, and Bill Gates knows exactly what he has to accomplish in order to not be ousted from his position.

But for everyone else, I suspect, what we expect a president to actually do after we elect them is far more nebulous.  Indeed, I think you can make a compelling argument it is this very nebulousness that has allowed Executive power grow unchecked over time.  And because we don’t really know what we want a President to do, we rally around buzzword like “character,” “experience,” “outsider,” or “leadership,” without ever bothering to notice that we almost always do so entirely without context. As a country, I think we’re afraid to admit that we don’t really have a solid idea — either collectively or as individuals — of what the job of US President does or ought to entail. This is something we do to our own detriment.

I have a good friend who spent years as an investigative journalist, but who is now the managing editor of one of the only two papers Portland has left that does actual reporting. He was telling me recently about his interview for that job. In that interview, they asked him a group of surprisingly simple and deceptively difficult question: If we hire you today, what will you spend your time doing tomorrow, and the next day? When you’re up and running, what will you spend your average days doing and working on?

I would love to see more of these kinds questions asked to Presidential candidates in the future.  I think it might actually help us elect better ones.

* Except for Ken’s wife Barbara, who — let’s face — it is kind of an social climber.

[Picture: Screen shot of the Cabinet Meeting scene from the Warner Brothers movie Dave, via YouTube.]